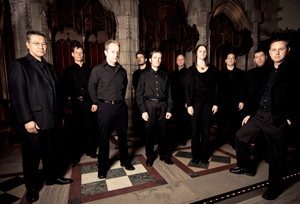 Anderson, a musicologist at the Eastman School of Music who assumed the directorship of the 13-year-old ensemble in 2008, prefaced the concert with an audience-friendly introduction to Machaut’s musical style, demonstrating how the composer created tension and release and giving examples of Machaut’s spiky, double-leading-tone cadences. That probably only partly prepared the listeners for Machaut’s sound-world with its stark open fifths, sudden bursts of lush harmony and flights of hocket — the ricocheting of short notes back and forth between voices imitating hiccups that Machaut and his contemporaries got a kick out of incorporating into sacred pieces.

And the concept of “isorhythmic” motets constructed over a plainchant bass organized into repetitive rhythmic patterns with upper voices singing multiple texts at once is at odds with our post-Reformation aesthetic that assumes sung words should be understandable except in polyphonic situations.

But a better argument for the listenability of Machaut’s music than Schola Antiqua gave would be difficult to imagine. The eight-voice ensemble (one female soprano, one countertenor, four tenors and two basses) sang with an attractive straight tone and wonderful tuning, producing clear textures, fleet melismas and dramatic dynamic contrasts, which brought welcome variety to Machaut’s musical repetitions in sections of the Mass. And in this performance of the first-ever setting of the entire ordinary of the rite by a single composer, it was interesting to hear Schola Antiqua pronounce Latin vowels in the way French fourteenth-century singers might have done.

Concert performances of mass settings are different in real time from what a contemporary liturgy would have been like. Schola Antiqua wisely inserted two of Machaut’s motets between the Gloria and Credo and the Credo and Sanctus to represent the space that would have been taken up with liturgical activities.

The Latin-texted Fons totius superbie / O livoris feritas / FERA PESSIMA (the title identifies the words of the two added voices above the Gregorian tenor, listed in caps) is a discourse on the deadly sins of pride and envy, one in each added voice over the plainchant text most evil beast. Bone pastor Guillerme / Bone pastor, qui pastores / BONE PASTOR is a curiously ambiguous tribute to the Archbishop of Reims Cathedral (where Machaut was a canon), who seemed to possess few of the virtues articulated in the motet. Both pieces were skillfully sung by subsets of the choir who brought out the striking clashes as well as beautiful consonances in the second.

The Agnus Dei and brief Ite missa est of the Mass were strangely marooned onto the second half of the program before the five secular works. The set began with the famous, cleverly-constructed, palindromic rondeau, Ma fin est mon commencement. Bass William Chin followed with a vibrant performance of the virelai, Foy porter, backed up by three male voices who repeated the energetic refrain. A four-part ballade, Biauté qui toutes autres pere, preceded a ravishing solo performance of the well-known virelai, Douce dame jolie, by soprano Stephanie Sheffield.

The program concluded with Machaut’s four-voice rondeau, Rose, liz, printemps, verdure, described by Anderson as “luxuriant” and so famous in the fourteenth century that it was included in multiple manuscripts. The final piece got off to an amusing start as the cathedral’s bells tolled 9 pm just as Anderson was giving the pitch, but once launched, Rose, liz provided a glorious finale to the evening. After superbly tuning its final chord, the chorus looked meaningfully upward as its sound faded away into the gothic vault of the nave.

Friday’s performance was documented in an elaborate program book with notes, full texts of all the motets and secular pieces, and a charming miniature from a contemporary manuscript in the Bibliothèque nationale de France showing Lady Nature introducing Meaning, Rhetoric and Music to Guillaume de Machaut. The only thing missing was a staple or two to hold all the pages together.

Congratulation to Greg Heislman for bringing yet another distinguished vocal ensemble to the Helen D. Schubert Concert Series. There are more on the way: next season the series will include Stile Antico (UK) on October 11 and Scott Metcalfe’s Blue Heron Vocal Ensemble (Cambridge, MA) on April 11 as well as a repeat performance by the Daughters of St. Paul Choir (also from Cambridge) on December 6 and Cleveland’s own West Shore Chorale performing the Brahms Requiem on March 14. Jubilation!, the Elizabeth Stuart Church Choir Festival is still to come this season on May 9 & 10, and returns to celebrate its seventh anniversary on May 8 & 9, 2014.

Published on ClevelandClassical.com May 3, 2013

END_OF_DOCUMENT_TOKEN_TO_BE_REPLACED

The strings-only work by Berg has made relatively frequent appearances on the Orchestra’s programs. In 2021, the musicians recorded it for the In Focus series, and it appeared again on last year’s European tour. Friday’s rendition maintained the group’s characteristic light and effortless playing, each section blending as much as possible to echo the work’s original form as a string quartet. At fifteen minutes total, the piece is quite short, but the dense encoded musical meanings require some extra-attentive listening. Splitting up the three movements ensured that each one could be appreciated on its own. END_OF_DOCUMENT_TOKEN_TO_BE_REPLACED