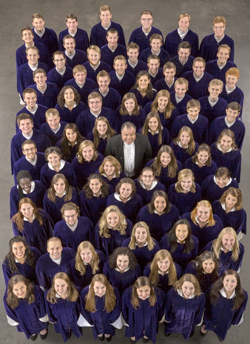 For many decades the legendary St. Olaf Choir, based at St. Olaf College in Northfield, Minnesota, has been a gold standard by which other American collegiate choirs are often measured. In more than a century since its founding, the choir has had only four directors, beginning with F. Melius Christiansen in 1912, through its current director Anton Armstrong, who this year celebrates his 25th anniversary with the choir.

The choir is currently on an arduous twenty-day tour throughout the northeastern United States, appearing at Cleveland’s Severance Hall on Monday, February 2, in front of a large, enthusiastic audience that contained a substantial number of choir alumni. Other stops on the tour include Mechanics Hall in Worcester, Mass., Carnegie Hall, the Princeton University Chapel, Northwestern University, and Orchestra Hall in Minneapolis, plus various church venues.

From its beginnings, the St. Olaf Choir has cultivated a pristine sound, carefully blended for clarity, intonation and diction. In an essay in the lavish program booklet (which also thoughtfully included complete texts, translations and publisher information about the compositions) there was a discussion about how each succeeding director has subtly altered the direction and sound of the choir, while maintaining is original essence. The directors have recognized the limitations of the developing voices of college students, striving for cohesive sound over drama and dynamic contrasts. The chosen repertoire shows the best aspects of the choir. The connection of St. Olaf College to the Evangelical Lutheran Church in America is reflected in its mostly sacred repertoire.

The concert was in four sections, with an intermission between the second and third parts, opening with two brief Renaissance motets, a setting of the Lord’s Prayer by Robert Stone, and I will not leave you comfortless (Non vos relinquam orphanos) by William Byrd. These were followed by the most significant work on the program, J.S. Bach’s motet Fürchte dich nicht, BWV 228. In each the musical pulse was solid, with precision of intonation. In the Bach motet, the many florid passages were clear and the chromaticism in the later section of the work was managed with aplomb. The a capella motet has enormous disaster potential, but the choir triumphed over the difficulties.

The second section of the program began with Mendelssohn’s Ehre sei Gott in der Höhe, a German setting of the Gloria in excelsis of the Mass, contrasting an eight-voice semi-choir with the full choir. Twentieth-century Swedish organist-composer Waldemar Åhlén’s In Winter’s Night was an exquisitely simple Christmas carol, with solo viola accompaniment, skillfully played by St. Olaf College faculty member Charles Gray.

Leonard Bernstein’s “Sanctus” from Mass was accompanied by piano duet, plus bells and percussion. Bernstein interspersed the Latin text with the equivalent Hebrew text, “Kadosh Adonai ts’vaot.” Although the choir’s performance was musical, it was a bit too polite, lacking the dramatic excitement or climax that Bernstein would have sought for this highpoint of the Mass. (Cue a Garrison Keillor joke about Minnesota Lutherans never wanting to make a fuss.) Ralph M. Johnson’s The Evening Meal, a gloss on the Last Supper, featured lush, close harmonies sung perfectly in tune, with long, slow phrases interrupted by angular, rushing, urgent passages. The unidentified soprano soloist was lovely.

The first half of the program ended with a tribute to two former St. Olaf Choir directors, a movement Kenneth Jennings’s “The Lord Is the Everlasting God,” notable here for the much wider dynamic range than we had heard up to this point in the program, a true forte, not just the dynamic restraint that had gone before it. F. Melius Christiansen’s classic St. Olaf setting of the Lutheran chorale “Wake, Awake, for Night Is Flying,” was clearly written under the influence of the Bach motets, with it’s elaborate variation on the chorale melody surrounded by freely-composed choral accompaniment based on the chorale phrases. To 21st century ears, it seems a bit hokey, but the St. Olaf Choir gave it a sincere performance.

The first part of the second half of the concert featured short works by Anthony Bernarducci, Daniel Elder and Eric Whitacre (whose “Kalá, Kallá,” from Five Hebrew Love Songs was brightly rhythmic, alternating with slow, reflective music). The most interesting works were three new pieces written in honor of Anton Armstrong. Rosephanye Powell’s With what shall I come, was straightforward, melodic, almost pop-song-y; Kim André Arnesen’s Flight Song set Euan Tait’s poem about night and love.

The most interesting and challenging work on the program was Australian composer Sarah Hopkins’s Past Life Memories, which had no text, but was a development of sung melody influenced by aboriginal music. The voices wove around each other with increasing complexity in a surprisingly raw sound very unlike the classic St. Olaf technique. A later section introduces “throat-singing” with its audible harmonic overtones. The two young men who did the overtone singing were very adept, and the effect was haunting.

The program closed with the late Stephen Paulus’s beautiful Pilgrim’s Hymn and three Spiritual arrangements, Anthony Leach’s This Little Light of Mine, L.L. Fleming’s austere Give Me Jesus, and Moses Hogan’s virtuosic The Battle of Jericho, which brought down the house. It was thrilling and the audience gave the choir and Armstrong a shouting standing ovation.

The choir sang two listed encores (“optional selections”), Joseph Flummerfelt’s arrangement of Danny Boy, and F. Melius Christiansen’s Beautiful Savior. I’m not sure how the latter could have been considered optional; for many in the audience, it was possibly the highlight of the program.

Although the concert was musically polished and satisfying, one aspect should be reconsidered. Members of the choir swayed with the music, not in the unison choreography of, say, a gospel choir, but in sections, and not all in the same direction at the same time. It was dizzying. With their dark robes, the choir resembled a group of closely planted royal blue palm trees waving in the breeze. The program notes described this movement as a way for the singers to have more freedom in their bodies while performing, but it distracted from the otherwise very fine performance.