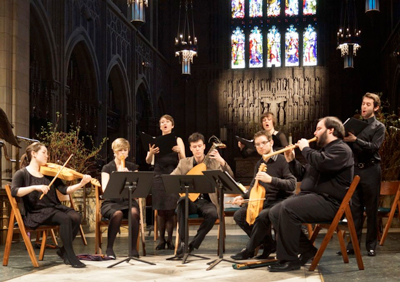 Case Collegium Musicum treated the Brownbag Concert audience at Trinity Cathedral on March 6 to fifteenth-century songs and dances by Guillaume Dufay, Pierre Fontaine, Hugo de Lantine, Gilles Binchois and Johannes LeGrant. And elaborations by a non-fifteenth-century composer, Debra Nagy, who continued her interesting practice of adding new voices to old music with such a sure hand that Dufay and company would surely applaud her efforts if they were still around.

The quartet of singers opened the program with Dufay’s Ma belle dame souveraine, singing with a pure, clear tone and fine diction that rang out splendidly in the cathedral’s fifteenth-century style gothic nave. That “fair and sovereign lady”, in time-honored fashion, is making life hellish for the spurned lyricist (“Make an ending of this grievous sorrow which I endure for your love”), sentiments that were later expressed in Hugo Latine’s Hélas, amour (“I will die if you don’t cure my ills”) and Dufay’s Je me complains (“I lament piteously…about the distress, pain and torment which I suffer silently” — or perhaps which I sing about!)

Love had a potentially happier outcome in Dufay’s florid Reveilles vous, a song celebrating the wedding day (and the blue-blooded lineage) of Victoria and Charles Malatesta in Rimini, and a funny ending in the sardonic finale, LeGrant’s Ente vous nouviaux mariés, a bedtime tale gone wrong when a man falls to sleep, leaving his neglected lady to murmur, Gardes vous sorlés pour les ras (“Save your ardor for the rats”).

Slightly changing the “orchestration” between songs, the Collegium sang solo, in pairs and trios, sometimes accompanied by the Renaissance fiddles called vielles, sometimes joined by the buzzy douçaine, a much quieter predecessor of the bassoon. Two gentle and elegant basse danses featured the instrumentalists.

Throughout the 45-minute performance, the Collegium distinguished themselves with their fine blend and faultless intonation. The only element with which one might take issue was that the singing was almost too beautiful at times to reflect the overwrought emotions of some of the texts.

But this was a program perfectly suited to the venue and occasion. Fine translations of the texts by Nagy, Ross W. Duffin and C.A. Robson were a snap to follow because the singers’ French diction was so clear.

END_OF_DOCUMENT_TOKEN_TO_BE_REPLACED

Concerts cancelled in 2020 may have put a brief gap in Ling’s record with the Orchestra (a program every season since 1984-1985), but the ensemble’s former resident conductor more than made up for it Sunday with a performance both commanding and personal. END_OF_DOCUMENT_TOKEN_TO_BE_REPLACED