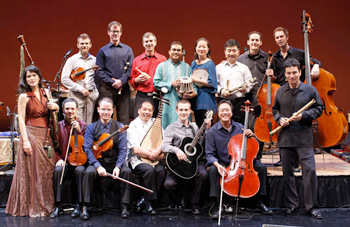 The Silk Road, the ancient trade route between China and the western world, was active for two millennia from before Alexander to the late Middle Ages. Across that highway traveled not only silks and spices but also inventions from gunpowder to printing and ideas from mathematics to Buddhism.

The Silk Road Ensemble, founded by American cellist Yo-Yo Ma over a decade ago, takes that East-West route as a metaphor for cultural exchange today, bringing western and non-western musicians into a vibrant, innovative, and deeply collaborative musical experience. The result is an evening of strange and wonderful sounds that might have delighted Marco Polo or Genghis Khan.

Thursday’s concert by the Silk Road Ensemble featured instruments I had barely known of before – the Indian tabla (hand-played, variable-pitch drums with a wide range of timbres), the Chinese pipa (a tall, gourd-bottomed lute), the Persian kamancheh (a long bowed fiddle with amazing flexibility and a human-sounding tone), and the Chinese sheng (a complex mouth organ—a sort of cross between a harmonica and a pipe organ).

I had heard bagpipes before, but not the remarkable wailing gaita pipes from Galicia in Spain. Prominent in many of the pieces was a shakuhachi, the expressive, note-bending Japanese end-blown flute, beautifully played by Kojiro Umezaki.

There were also instruments familiar to me — violins and viola, piano, double bass, drum set, and various other orchestral percussion devices. Oh, and there were also two cellos. Yo-Yo Ma greeted the audience with his usual geniality, calling himself half-seriously, ‘the second cellist in the group.’

Mr. Ma is, of course, not merely the second cello. It is partly his fame that gives this global experiment its draw. And it is his charisma and musicianship that attracts such masters as Yang Wei on the pipa, Kayhan Kalhor on the kamancheh, and Christina Pato on the gaita and piano (interviewed in this website last week).

But this is not a group riding on Mr. Ma’s coat-tails. They are in their own right superb musicians, and, as a collaborative ensemble, they command a powerful variety of sounds, genres, and musical effects. It seemed strange, however, that of the sixteen players, Ms. Pato was the only woman.

The music ranged from quiet solos to complex polyrhythmic passages of extended motivic development, to exuberant, all-out rock-band romps. Nothing was old, nothing was predictable.

Among my favorites was a piece by New York-based jazz composer Vijay Iyer called “Playlist for an Extreme Occasion.” The “playlist” idea (as in iPods) was a contemporary take on the concept of the Baroque suite – a set of independent but related movements, each with its own character. There was a bagpipe solo; a piano section with quiet meditation as in a melody by Keith Jarrett; and even a section featuring the multi-voiced Chinese mouth organ.

A selection of four pieces based on gypsy (or “Roma”) music sounded oddly familiar; in the classical world, we have often heard Haydn and Liszt writing such tunes. But who would have thought that gypsy music would include a thrilling solo on the tabla, an instrument from India? It made sense, when we realized from the program notes that the gypsies began their long diaspora in Rajasthan, in northern India. More importantly, it made great musical sense, especially in the hands of such a master drummer as Sandeep Das.

The program ended with a high-energy piece by the American John Zorn, more known as an avant-garde composer than in the genres of world music. With its echoes of klezmer, Zorn’s “Suite from Book of Angels” had a melancholy festivity that made a perfect vehicle for virtuosic solo work.

The concert was presented by the Tuesday Musical Association at E. J. Thomas Hall in Akron, which was full to the brim with a very appreciative audience, including a number of young people.

Members of the ensemble had spent the day with school children, generously sponsored by the outreach funds of the Tuesday Musical Association. I wonder how many youngsters in local bands and orchestra programs will now trade their clarinets for shakuhachis. Or perhaps Educators’ Music will soon find themselves with a sudden demand for kamanchehs?

Though the evening was fascinating, enjoyable, and informative, I kept wishing that we could have heard the Silk Road Ensemble in a smaller venue, without the intrusive amplification that the big hall made necessary. I suppose that, as usual, economic necessity drives the need for a group like this to be presented in cavernous halls like E. J. Thomas. The subtle timbres and the improvisatory collaborations of these fine players deserve to be heard by the ear itself, like the best chamber music.

END_OF_DOCUMENT_TOKEN_TO_BE_REPLACED

Rodgers & Hammerstein’s Cinderella was originally produced for television in 1957 — seven years after the animated Disney film was released — and starred Julie Andrews. According to the Rodgers & Hammerstein website, it was viewed by over 100 million people. END_OF_DOCUMENT_TOKEN_TO_BE_REPLACED

The story line has its origin in an 1855 play and an 1842 farce that Thornton Wilder mined for his 1938 play The Merchant of Yonkers. When that turned out to be a flop, in 1954 Wilder made the crucial decision to re-center the show around the character of the legendary marriage broker Dolly Gallagher Levi and renamed it The Matchmaker. END_OF_DOCUMENT_TOKEN_TO_BE_REPLACED

The Dodero Center for the Performing Arts at the Gilmore Academy in Gates Mills is one feature of an impressive campus. The auditorium is shallow, the stage is deep, and the ensemble played without a shell. Throughout the program, the sound, especially in instruments’ lower registers, tended to disappear. END_OF_DOCUMENT_TOKEN_TO_BE_REPLACED