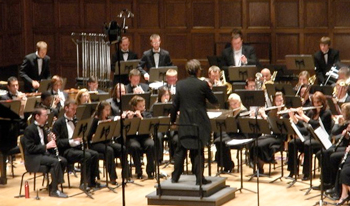 Though each of the two guest ensembles performed with surprising maturity and panache, it will be no surprise that the YSU Wind Ensemble contributed the evening’s two high points: Dana Faculty soprano, Misook Yun’s expressively astute portrayal of Musetta’s Waltz from Puccini’s La Bohème’s second act, and Dana Faculty clarinetist, Alice Wang’s performance of Frank Tichelli’s Concerto for Clarinet and Wind Ensemble, movements II and III.

La Bohème’s Musetta is a sophisticated, vivacious character willing to lead on older suitors, but who is in love with Marcello, the artist protagonist. Ms. Yun sang the short but difficult bel canto part with great poise and skill, and conductor Stephen Gage carefully kept the actively-florid Wind Ensemble parts from overbalancing her.

Leonard Bernstein’s Symphonic Dance Music from Westside Story (in Paul Lavender’s 2007 arrangement), much like the original 1961 orchestral version, is overly long, and more concerned with modernistic sounds than with actual dances. The piece dragged a bit, in spite of a skillful and well-balanced performance.

Gustav Holst’s Second Suite in F for Military Band, a venerable masterpiece, contributed two movements and a refreshing visit to British band music: a modal Song Without Words, replete with lovely dissonant suspensions, and Fantasia on the Dargason, an enchanting extended movement deftly combining variations on an original hornpipe-like English country dance with the tune Greensleeves. The performance was exceptional. The North Hills Wind Ensemble is a long established group with a new music commissioning program going all the way back to 1965. The group showed great dynamic balance and surprisingly mature phrasing.

The interesting evening closed with the two guest high school ensembles joining the YSU Wind Ensemble in a massed performance of Sousa’s Stars and Stripes, providing a huge ensemble over 150 strong and an appropriately rousing close.

END_OF_DOCUMENT_TOKEN_TO_BE_REPLACED

Rodgers & Hammerstein’s Cinderella was originally produced for television in 1957 — seven years after the animated Disney film was released — and starred Julie Andrews. According to the Rodgers & Hammerstein website, it was viewed by over 100 million people. END_OF_DOCUMENT_TOKEN_TO_BE_REPLACED

The story line has its origin in an 1855 play and an 1842 farce that Thornton Wilder mined for his 1938 play The Merchant of Yonkers. When that turned out to be a flop, in 1954 Wilder made the crucial decision to re-center the show around the character of the legendary marriage broker Dolly Gallagher Levi and renamed it The Matchmaker. END_OF_DOCUMENT_TOKEN_TO_BE_REPLACED

The Dodero Center for the Performing Arts at the Gilmore Academy in Gates Mills is one feature of an impressive campus. The auditorium is shallow, the stage is deep, and the ensemble played without a shell. Throughout the program, the sound, especially in instruments’ lower registers, tended to disappear. END_OF_DOCUMENT_TOKEN_TO_BE_REPLACED