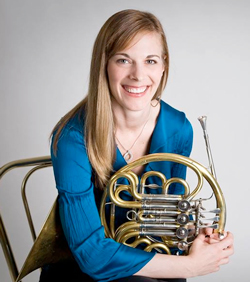 Ohio is one of the few states to harbor more than one major symphony orchestra within its borders. Three members of the Cincinnati Symphony joined bows, keys, and valves with a trio from The Cleveland Orchestra on Monday evening, May 8 at West Shore Unitarian Universalist Church. The program, featuring some unusual music by Carl Reinecke, Franz Strauss, and Ernst von Dohnányi, as well as a not-so-often-heard version of Romances by Robert Schumann, made a gradual crescendo of sophistication.

Cincinnati was first at bat, fielding hornist Elizabeth Freimuth, clarinetist Benjamin Freimuth, and pianist Kimberly Russ in a performance of Reinecke’s Trio in B-flat, Op. 274. A friend of Robert and Clara Schumann, admired by Mendelssohn, and a teacher Liszt entrusted to give his daughter piano lessons, Reinecke directed the Leipzig Gewandhaus Orchestra for three and a half decades, and still found time to write music — lots of it. His numbered works alone run to Op. 288.

The Trio, with its unusual format of a second-movement march and a third-movement scherzo with double trios, is an entertaining salon piece of a sentimental bent. The Freimuths and Russ gave it a masterful, warmhearted performance.

Franz Strauss, in addition to siring Richard Strauss, was a bandmaster and a horn player who was on duty for the premieres of two of Wagner’s Ring operas. His Seaside Impressions is a brief character piece that Elizabeth Freimuth played with a handsome tone and just a hint of vibrato.

The Three Romances, originally for oboe and piano, were composed as love letters from Robert to Clara Schumann. On Monday, we heard them in a version for clarinet and piano, which gave Benjamin Freimuth and Kimberly Russ the opportunity to achieve more tonal drama and a wider palette of color and dynamics.

So far, each work on the program had topped the previous one in terms of musical substance. When Cincinnati finally joined Cleveland (represented by violinist Katherine Bormann, violist Lembi Veskimets, and cellist Charles Bernard) in Dohnányi’s Sextet in C, Op. 37, the evening reached its artistic apogee in a well-crafted work that knew where it wanted to go, and made its journey with style and humor.

The audience recognized quality when they heard it, breathing an audible murmur of approval after the dramatic first movement. A broad, noble march followed, then an entertaining set of variations, and to end, a gleeful finale with a false ending that lured the listeners into premature applause. You could imagine Dohnányi saying, Gotcha! (And the audience saying, So you did!)

Bringing members of two distinguished ensembles together in this kind of program was a clever idea. Let’s hope that the Rocky River presenters are already thinking about a rematch.

Although the Museum had just opened again earlier in the week, in-person concerts were not on the agenda. Instead, Classical Piano Series director Emanuela Friscioni and her husband Antonio Pompa-Baldi invited a virtual audience into their handsome, sun-dappled music room for an intimate, exquisitely-played program of four-hand piano works by Schubert and Debussy topped off with the premiere of a new work by their fellow Italian, Luca Moscardi. END_OF_DOCUMENT_TOKEN_TO_BE_REPLACED

END_OF_DOCUMENT_TOKEN_TO_BE_REPLACED

Northeast Ohio’s Les Délices has long been that rarest of beasts: a world-class organization so proud of its region (ours) and repertoire (distinct niches in pre-1800 music) that it never tries to be everything to everyone, paradoxically making a strong case for a broad, curious international following. In the December episode of its SalonEra series, the ensemble embraces its strengths and community to marvelous effect. END_OF_DOCUMENT_TOKEN_TO_BE_REPLACED