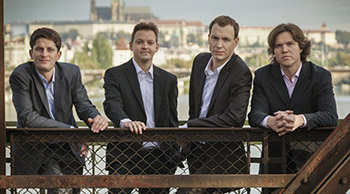 Due to the ensemble’s travel schedule and time zone differences we were unable to schedule a telephone interview, but violinist Štěpán Ježek graciously agreed to answer questions by email.

Mike Telin: The Quartet will be presenting a wonderful program. Could you please share some brief thoughts about each of the works?

Štěpán Ježek: The music in “Intimate Letters” is directly describing the rather wild inspiration Janáček was getting in his late years from his “muse” Kamila Stössel. He fell in love with her and they exchanged numerous letters — The Intimate Letters. A lot of mystery remains because both Kamila and Janáček’s wife Zdenka either destroyed some of the letters or blacked out parts of the text. A fascinating comparison is the Lyric Suite by Alban Berg, who composed his masterpiece only some 50 miles south from Janáček around the same time. The motivation and basic idea is similar: Berg’s “muse” was Hanna Fuchs-Robettin, whose initials ‘H-F’ Berg interweaved in the piece as well as in other later pieces — Lulu for example. While Lyric Suite is complex, somewhat cerebral, and carrying a lot of pain, the “Intimate Letters” are much more based on feeling, intuition, and exhilarating energy.

Bedřich Smetana’s String Quartet No. 1 in e, “From My Life”

Smetana’s first quartet is fully in service of program music, the new form of music which he and Franz Liszt brought to life. Here Smetana connects the drama of the first movement to his personal struggle to create a mature and respected original Czech music — a task not only important for Smetana, but in some sense for all the Czech nation at the time. It was crucial to prove that the Czech language and culture existed independently from German language and culture — a typical problem for smaller nations in Europe during the mid-19th century. The second movement, a Czech Polka, refers to Smetana’s love for dance and balls. The slow movement has some of the most beautiful music in the Czech Romantic repertoire, and is a memory of Smetana’s deceased wife. The last part is a triumph and celebration of Smetana reaching the goals of his life. Just before the end the tragic mood reappears, and the disturbing sound that deprived him of his hearing can be heard before the final cadence calms the mood.

Dvořák’s G-major quartet is his masterpiece. He has a clear command of form, instrumentation, counterpoint, contrast, and other features a great piece of music must provide. It offers a wonderful balance between complexity and comprehensibility. One can easily enjoy the piece hearing it for the first time, however there is much to discover on later occasions. Since Dvořák was a balanced and positive person, so is his music. He himself described music as being a “pure pleasure” for him. In my view that is the reason his music brings so much pleasure to listeners worldwide.

ŠJ: Czech music is definitely influenced by the Austro-German music tradition. It uses the same forms (with the exception of Smetana) and draws on the same sources of inspiration — Smetana loved Schumann, and Dvořák felt close to Schubert’s music and learned a great deal from Brahms. But the material that Czech composers used is different from the German or Austrian. I believe the Czech composers felt, and in fact they probably were, closer to the folk music of rural musicians than the Germans were. This gives the music a certain natural simplicity and perhaps even naiveté which makes it very pleasing and somehow honest in a special way. Brahms also worked with folk music a lot, but in his case the folk tunes are more stylized and refined by his intellectual powers, whereas Dvořák and Smetana are less sophisticated in this respect and therefore somewhat more direct. Janáček is by far the most naturalistic in his treating of folk music and therefore his work is comparable with that of Bartók.

MT: I know the Bennewitz Quartet was founded in 1998 when you were students. Where were you studying and how did the four of you come together?

ŠJ: We all studied at the Academy of Music in Prague. The Quartet was formed there but it took about two years before it got its “final” shape. We went through our studies together in Prague and then two postgraduate courses, each of them lasting for two years — one in the Royal School of Music in Madrid and the other at the Music Academy in Basel. After fifteen years we changed our first violinist. So Jakub is the newest member of the group and has been with us for five years. And this year is our 20th anniversary.

MT: What will the Quartet be doing as “ensemble-in-residence” at the Czech Philharmonic?

ŠJ: The residency is with the Czech Chamber Music Society of the Czech Philharmonic. It gives us the chance to perform three concerts with programs and eventually partners of our choice in the main hall in town (the Dvořák Hall, which seats about 1,200). So far we have played two concerts and we have one more in April. We tried to cover various examples from our repertoire from the past 20 years. The first concert consisted of Mozart, Ullmann, and Brahms; in January we played Schumann, Martinů, and Schubert; and in April it will be Debussy, the Czech contemporary composer Hořínka, and Dvořák. It’s very traditional programming which fits the rather conservative audience in Prague.

MT: I see that your concert at the Elbphilharmonie in Hamburg is sold out. Congratulations. I’m sure you are looking forward to playing there, but could you give some reasons why?

ŠJ: Playing in a sold-out hall is always nice, no matter which hall it is. But of course, the Elbphilharmonie is a special case. Everyone wants to play there and everyone wants to hear the concerts. We were simply lucky: we played in Hamburg two years ago and were invited back. Meanwhile, after many years of struggle the Elbphilharmonie’s magical building was finished and the series which invited us moved there. And so here we are giving two big concerts in the famous Elbphilharmonie. Lucky…

MT: Please tell me anything else you think would be of interest to readers.

ŠJ: Only to let the listeners know that it will be a pleasure for us to talk to everyone after the concert and learn what they thought about the music, whether it spoke to them in some special sense perhaps, etc.

END_OF_DOCUMENT_TOKEN_TO_BE_REPLACED

The Orpheus myth inspired French Baroque composers Jean-Philippe Rameau and Philippe Courbois to write expressive solo cantatas about the famous Greek musician-poet and his futile attempts — because of his own impatience — to rescue his beloved Eurydice from the grasp of Pluto in the Underworld. These are beautifully performed by the clear-voiced soprano Hannah De Priest and the velvet-throated baritone Jonathan Woody (who makes a walk-on appearance in the Rameau). END_OF_DOCUMENT_TOKEN_TO_BE_REPLACED

Now that live concerts are beginning to proliferate, it was delightful to hear Oberlin cello professor Darrett Adkins ring a change on the solo suite format with his Hypersuite No. 3 on September 28 in the Cirigliano Studio Theatre at Lorain County Community College. His program opened the new season of Signature Series performances in Elyria, and was dedicated to the memory of Eva Hornyak. END_OF_DOCUMENT_TOKEN_TO_BE_REPLACED