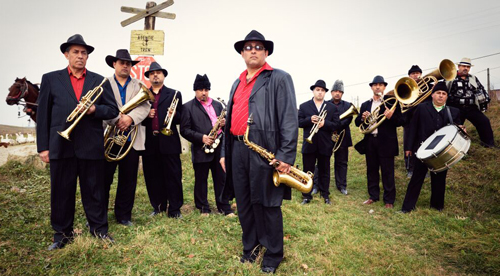 The story of how Fanfare Ciocărlia, a Gypsy brass band from the isolated village of Zece Prăjini in northeastern Romania, came to be a driving force on world music stages around the globe is one for the silver screen. In 1996 Henry Ernst, a German traditional music enthusiast found himself near the village re-fueling his car. “I had a chat with a farmer who asked me why I was in Romania,” Ernst recalled during a recent interview. “I told him that I liked traditional Romanian music, and he said ‘if you like that, you should go to the next village a few kilometers away and you’ll find Gypsies with a brass music tradition.’ It sounded interesting to me so I said ‘Why not? Let’s go.’”

Having debuted in Cleveland in 2013 on the Cleveland Museum of Art’s Ohio City Stages summer series, Fanfare Ciocărlia, whose name translates as “lark’s song,” will return to Cleveland for a performance in CMA’s Gartner Auditorium on Wednesday, April 13 at 7:30 pm. The performance is part of the Museum’s Performing Arts Series.

I began the conversation with Henry Ernst by asking him when he first started traveling to Romania.

Henry Ernst: It was back in the late 1980s when I was a child and went with my parents. Growing up in East Germany, Romania was one of the few countries we could visit as tourists without a visa. For some reason I always went back. It’s a beautiful country and the people are every welcoming. After the revolution it became a hobby for me to travel there several times each year.

Mike Telin: Are you an ethnomusicologist by training?

HE: No, not at all. At that time I was just a passionate world music listener and had nothing to do with the music business. I was a trained sound engineer, and one of my passions was recording village bands that I found more or less by accident. But the brass music I heard in Zece Prăjini simply blew me away.

MT: It was fascinating to me to realize that villages like Zece Prăjini still existed. Also, when I think of Gypsy music I don’t think of brass bands.

HE: It was a fascinating discovery for me too. I knew a lot of Gypsy bands but with the traditional set-up of violin, double bass, accordion, and cimbalom. So when I heard this farmer talking about a brass band I was quite curious what it would sound like.

MT: What happened when you and the farmer arrived at Zece Prăjini?

HE: I remember meeting an old guy at the entrance to the village and I asked about brass music. He said, ‘Come with me’, so we went further into town and waited for a couple of minutes. Then 24 musicians showed up. They were young kids and old men, and they had their instruments and started playing music like I had never heard before.

Growing up in Germany I was used to the German and Czech styles of waltzes and polkas. But these guys performed at such a speed, and with such a wall of sound, I was simply blown away and fascinated by their thrilling repertoire.

MT: What are the origins of the tradition?

HE: It goes back to the Ottoman Empire, which is why you can hear a flavor of Oriental sounds. Brass music became very strong in Romania 150 years ago because of the minority populations of Austrians and Germans who settled there and brought their homeland traditions with them.

The Romanians wanted to have the same kind of brass music for their own festivities, and Gypsies were always good musicians, so they started playing German and traditional music in their own style. And Zece Prăjini became known in the region as a village where the music was performed with incredible speed. That’s unusual in Romania. If you go to other villages you will find brass bands, but they play at far slower tempos.

MT: Do you have any idea why playing at such fast tempos became their style?

HE: No. Many times I asked, but nobody really knows.

MT: When did you decide that the band should tour, and what was their reaction when you first proposed it?

HE: The first time I went to the village I intended to stay for one or two hours, but what I discovered made me decide to stay for three months, just to study their music, and to get to know the people. It was during that time that I came up with idea of the tour. I said ‘Hey guys, I will bring you to Germany.’ Of course everybody said it was a great idea, but at the same time it was clearly written on their faces that they thought I had gone totally crazy. I could see them thinking ‘He doesn’t know what he’s talking about. We’ve never left our region. We’ve never even visited the capital of Romania, and he wants to bring us to Germany.’

When I went back to Germany I sold everything I had in order to get the cash to make the tour possible. And when I returned to Zece Prăjini with the goal of applying for passports for the band, which they never had before, they realized that the dream was starting to become true.

MT: Who does the musical arrangements?

HE: In the beginning we toured with the repertoire they played at weddings and festivals. But as soon as they began to have such success in Europe it was clear that we’d have to create new repertoire that included a variety of musical styles. Some ideas came from my side, and the musicians proposed their own ideas of how to shorten some of the pieces. Traditionally, a dance can last for twenty minutes, which is great at a wedding, but that’s not suitable for a show on tour.  So we had to think about how to cut them down to three or four minutes, while highlighting the most interesting parts of a tune.

MT: Are the arrangements notated?

HE: No, the band has always played by ear. It’s all very fascinating.

MT: When was the first trip to Germany?

HE: It was during the spring of 1997, and in the fall of that year we did a showcase concert at WOMEX (World Music Expo) in Marseille, France. The showcase was so successful: hundreds of presenters and festival directors attended, and from that moment on the band began to tour all over Europe. They visited the U.S. for the first time in 2001, and this will be their seventh trip.

MT: Has the group’s personnel remained constant over the years?

HE: Most of the original musicians are still in the group, although in the past five years we have replaced two of the trumpet players.

MT: How many players will be traveling on this tour?

HE: There will be twelve musicians onstage, but we always tour with fourteen.

MT: Will the Cleveland concert include repertoire from their new album? 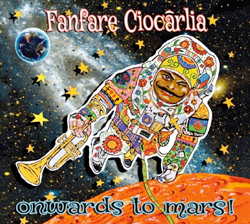 by Julian Ring, Special to ClevelandClassical.com

NPR Music’s Bob Boilen was barely able to squeeze the 12 members of Fanfare Ciocarlia behind his Tiny Desk last December. I worked at that desk for three months, so trust me when I say that’s no small feat.

The more daunting task may have been containing the massive sound for which the Romanian brass band has gained a reputation. Fanfare Ciocărlia are both heritage act and dance band; their music traces back more than two centuries, with breakneck tempos and stupefyingly tight horn lines that rival contemporary DJs in party-starting potential. The group’s latest album, Onwards to Mars, celebrates its 20th anniversary and the diverse musical traditions its members have accumulated over the years. Colombian cumbia and American blues rub shoulders with Moldovan rock covers and Romanian standards across 15 tracks. There’s very little cohesion — the record’s biggest shortcoming — but even when unfocused, Fanfare Ciocărlia are still pure fun.

END_OF_DOCUMENT_TOKEN_TO_BE_REPLACED

Although it wasn’t the original plan to go online last weekend for the final round of the James Stroud Classical Guitar Competition, moving to a digital format suited the event well. Young performers Aytahn Benavi, Patricia Hernandez, Ian Tubbs, and Eric Wang played in the intimate setting of their own homes, giving everyone who tuned in a front row seat. END_OF_DOCUMENT_TOKEN_TO_BE_REPLACED

END_OF_DOCUMENT_TOKEN_TO_BE_REPLACED

Joining a long list of arrangers, Parker Ramsay has now transcribed the Variations for the modern pedal harp, an instrument for which he holds a master’s degree from Juilliard, in addition to a degree in history from Cambridge University, plus a master’s in historical performance (organ and harpsichord) and an artist diploma (organ) from Oberlin. END_OF_DOCUMENT_TOKEN_TO_BE_REPLACED