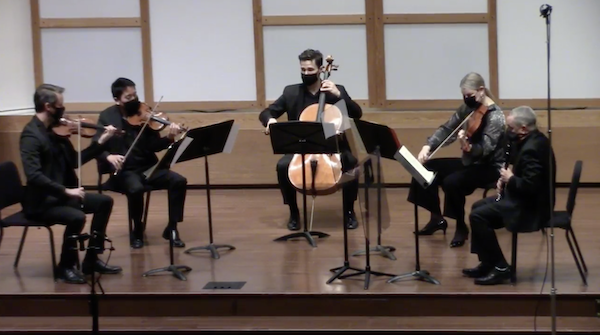 Four string players and a clarinetist, all from The Cleveland Orchestra, came together on December 7 for a quartet and a quintet in “Nothing But Mozart,” streamed live from West Shore Unitarian Universalist Church as part of the 62nd season of the Rocky River Chamber Music Society.

First up was the String Quartet No. 19 in C (“Dissonance”). That nickname comes from the mysterious and unusual opening, which was given a compelling atmosphere by violinists Peter Otto and Yun-Ting Lee, violist Lembi Veskimets, and cellist Dane Johansen.

Character was just one aspect of playing that stood out as they navigated Mozart’s cheer, his sternness, and his hushed contentedness in the first movement, his beautiful expressivity in the second, his spunk and his dark-and-stormy in the third, and his charm and delicious viciousness in the fourth.

Even more impressive was the performers’ phrasing: their ability to pump up the energy higher than most musicians have it in their mind to go, then finally resolve gracefully. Related to that is their unity of purpose, all of the same mind in each gesture. If there’s one complaint, it’s that this beautiful and exciting performance might have benefited from an extra dose of abandon. That, and the slightly boomy audio quality throughout the evening made it all feel less intimate than it would have in person. 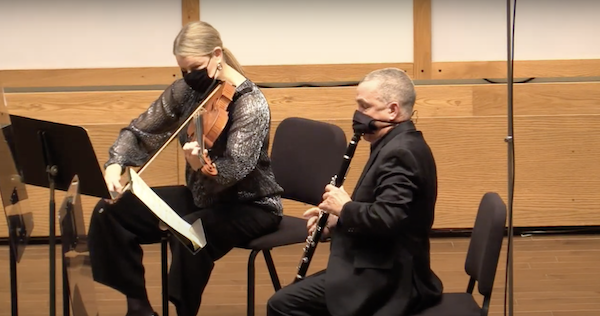 A short pause allowed shields to be put up and another chair to be brought out for Daniel McKelway — it was time for Mozart’s Clarinet Quintet in A. Pauses between movements stretched out a little longer than ideal, taking away a hint of energy, but this was still a strong performance, in large part due to McKelway’s appealing palette of tone colors. His opening arpeggios were warm yet clear, and his forward playing at the start of the Larghetto set the table for a clear contrast when the melody returned later on, hushed and heavenly.

That flexibility of tone went hand in hand with his musicality, as he tossed in equal parts charm, beauty, and verve — a recipe the quartet also clearly knew well. In addition to their fine support and blend, one particular highlight from the strings was violist Lembi Veskimets’ solo in the finale. Dramatic and exceptionally reflective, it was the kind of playing that makes you lean in, even when what’s in front of you is only a computer.

END_OF_DOCUMENT_TOKEN_TO_BE_REPLACED

Supported by engagingly, yet simple staging by Cara Consilvio, a well-prepared cast of singers told the archetypal story of Cinderella with charm and flair. Framing the production was  a sparse but colorful set and wonderful lighting by Dave Brooks. END_OF_DOCUMENT_TOKEN_TO_BE_REPLACED