Oberlin, OH — January 24, 2012. At a Sunday morning ceremony in Klonick Hall of the Oberlin Conservatory of Music on January 22, Dean David Stull and donor Stephen Rubin announced the winners of the grand prize and public prize in the first bi-annual Rubin Institute for Music Criticism, which began on January 18. 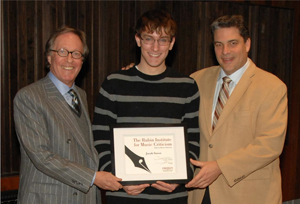 The $10,000 prize went to Jacob Street (above, with Rubin and Stull), a master’s candidate in historical performance from North Reading, MA. In a surprise development, the panel awarded honorable mention to Megan Emberton, a senior piano major from Chelsea, MI, along with a cash award of $2,500.

During the Institute, ten Rubin Scholars prepared in a fall term Introduction to Music Criticism Class team taught by Mike Telin and Daniel Hathaway of ClevelandClassical.com and Donald Rosenberg of The Plain Dealer, wrote reviews of Oberlin Artist Recital Series Concerts by The Cleveland Orchestra, pianist Jeremy Denk, Apollo’s Fire and the International Contemporary Ensemble. Reviews were critiqued by a panel of national music critics including Alex Ross of The New Yorker, Anne Midgette of The Washington Post, Heidi Waleson of The Wall Street Journal, Tim Page of USC, John Rockwell, retired critic of The New York Times, and Rubin, who is publisher at Henry Holt in New York. 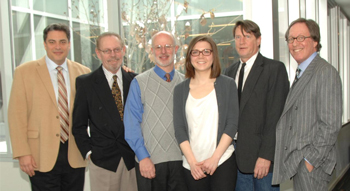 A Public Prize for the best review of one of the first three concerts by a member of the audience, as judged by the teaching panel of Telin, Hathaway and Rosenberg, was awarded to Samantha London of Baltimore, MD (above, with Stull, Hathaway, Rosenberg, Telin and Rubin). In yet another surprise move, the Conservatory announced the awarding of an honorable mention to Earl Pike of Cleveland Heights, along with a prize of $250.

Click here to visit the Rubin Institute website, where full coverage of the Institute includes postings of all the student reviews and the top 18 audience reviews.

The cimbalom was the feature of the show, an instrument capable of taking on many personas. Its performer, Chester Englander, has shaped his career around the instrument, and has inspired composers to write more repertoire for it, some of which was presented on the program. END_OF_DOCUMENT_TOKEN_TO_BE_REPLACED

You wouldn’t expect that acoustic from a glance at the nave, which is wide and long, but not especially lofty. But when I guest conducted a local amateur choir and professional orchestra in Beethoven’s Mass in C there a few years back, during the first rehearsal we released the final chord of the “Gloria” and listened in astonishment for the next several seconds. The sound continued to roll down the space like the big wave that surfers dream about. END_OF_DOCUMENT_TOKEN_TO_BE_REPLACED