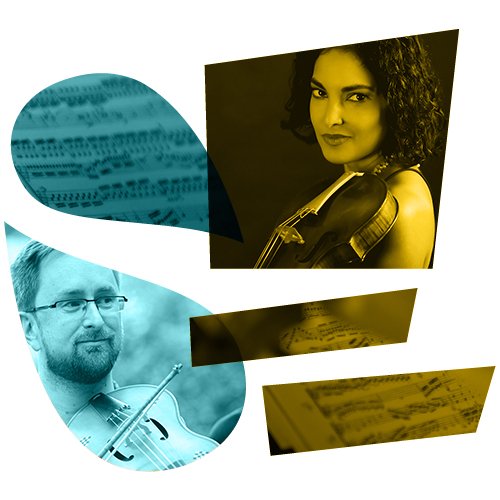 With the onslaught of newly created online content designed to entertain the stay-at-home audience, SalonEra is a standout. Produced by Cleveland-based early music ensemble Les Délices and hosted by Debra Nagy, each show is centered around a single topic and features guest artists who bring the subject du jour to life.

On Monday, November 16, Nagy welcomed guest violinists Gail Hernández Rosa, Edwin Huizinga, and David McCormick to discuss their recent projects that combine early music and folk traditions. And as Nagy noted during her introduction, each violinist “keeps one foot firmly in the Baroque world and the other just outside.”

The hour-long program, titled “Folk Influences,” began with Hernández Rosa’s arrangement of the 17th-century Scottish tune For Lack of Gold I Lost Her. Recorded remotely from each musician’s home, the heartfelt playing by Hernández Rosa, Huizinga, and McCormick perfectly set the stage for the topic of the evening.

Hernández Rosa told Nagy that her two loves are early music and folk music, and that she often imagines Telemann and Bach hearing fiddle tunes in the local pubs. She went on to introduce one of her recent projects — transforming Telemann’s “Gigue” from his Sonata in D into a piece of folk music. The video of Hernández Rosa, Daniel Turkos on bass, and Paul Holmes Morten on Baroque guitar did make you want to move your feet.

Speaking from Nova Scotia, Edwin Huizinga said that his love for Baroque and folk music makes him want to transport himself back in time. “I’m thinking, who am I if I’m playing this music in the 17th century and getting ideas from composers.”

In his latest project Partita Americana, Huizinga collaborates with guitarist William Coulter in Bluegrass and Newgrass tunes and Bach. In a commercially produced video from the album, the violinist and guitarist were joined by Ashley Broder on mandolin in a work that combines Bach’s “Loure” from the Partita in E with Gary Harrison’s Red Prairie Dawn.

The segment concluded with Huizinga’s arrangement of Anxo Pintos’ Cancro Cru. In the remotely recorded trio with Hernández Rosa and McCormick, each brought their own brand of Spanish flair to the work.

Located in Charlottesville, VA, David McCormick offered up one of Thomas Jefferson’s favorite tunes, Lochaber. As a fellow at the International Center for Jefferson Studies, McCormick has immersed himself in the study of Indigenous and early American music, particularly Black music-making in and around Monticello. “I quickly discovered that there was more to the story than that Thomas Jefferson was a violinist,” he told Nagy. “What’s interesting to me is that the fiddlers in the Black string bands had a foot in both worlds — fiddle tunes of the day and the opera dance world.”

Demonstrating his point, McCormick performed “Valse Infernale” from Giacomo Meyerbeer’s opera Robert le diable and the traditional Money Musk, which he played from Jefferson’s handwritten version of the tune.

“If you look closely, you discover that the Black fiddle players around Monticello were all related to Jefferson,” McCormick said, displaying the Jefferson and Sally Hemings family tree. He added that he is also looking at Slave Songs and Spirituals as early music. That topic will be presented in his upcoming webcast Expanding the Narrative on Sunday, November 22 at 4:00 pm.

Bringing “Folk Influences” to a close, McCormick, Hernández Rosa, and Huizinga provided a touch of elegance in their performance of the “Air de ballet” from Robert le diable.

END_OF_DOCUMENT_TOKEN_TO_BE_REPLACED

Rodgers & Hammerstein’s Cinderella was originally produced for television in 1957 — seven years after the animated Disney film was released — and starred Julie Andrews. According to the Rodgers & Hammerstein website, it was viewed by over 100 million people. END_OF_DOCUMENT_TOKEN_TO_BE_REPLACED

The story line has its origin in an 1855 play and an 1842 farce that Thornton Wilder mined for his 1938 play The Merchant of Yonkers. When that turned out to be a flop, in 1954 Wilder made the crucial decision to re-center the show around the character of the legendary marriage broker Dolly Gallagher Levi and renamed it The Matchmaker. END_OF_DOCUMENT_TOKEN_TO_BE_REPLACED

The Dodero Center for the Performing Arts at the Gilmore Academy in Gates Mills is one feature of an impressive campus. The auditorium is shallow, the stage is deep, and the ensemble played without a shell. Throughout the program, the sound, especially in instruments’ lower registers, tended to disappear. END_OF_DOCUMENT_TOKEN_TO_BE_REPLACED