Oberlin College and Conservatory’s popular Convocation Series will begin the year with a free public lecture and Q&A session featuring Atlanta Symphony Music Director and Conservatory faculty member Robert Spano. A 1984 graduate of Oberlin Conservatory, Spano will be speaking about “The State of the Art,” drawing on his personal experiences and professional career to highlight new ways creative musicians can forge careers in the arts. 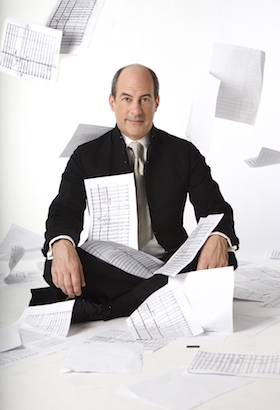 Widely known as a conductor, composer, pianist, and pedagogue Spano’s career defines success. The Q&A will be facilitated by Conservatory Dean Andrea Kalyn. The lecture will be held in Finney Chapel on Thursday, September 14 at 7:30pm.

Widely known as a conductor, composer, pianist, and pedagogue, Spano is beginning his 17th season with the Atlanta Symphony. During his tenure, the symphony has won six Grammy Awards and performed in concert halls around the world. His recording projects bear labels from Deutsche Grammophon, Telarc, and ASO Media. A passionate advocate for new music, Spano founded the Atlanta School of Composers, which includes Michael Gandolfi, Adam Schoenberg, Christopher Theofanidis, and Jennifer Higdon. Spano also serves as Music Director for the Aspen Music Festival, where he oversees the programming of more than 300 events and leads the Aspen Conducting Academy.

The Convocation Series is sponsored by the Finney Lecture Committee and the Office of the Oberlin College President. —Hannah Schoepe

END_OF_DOCUMENT_TOKEN_TO_BE_REPLACED

The Orpheus myth inspired French Baroque composers Jean-Philippe Rameau and Philippe Courbois to write expressive solo cantatas about the famous Greek musician-poet and his futile attempts — because of his own impatience — to rescue his beloved Eurydice from the grasp of Pluto in the Underworld. These are beautifully performed by the clear-voiced soprano Hannah De Priest and the velvet-throated baritone Jonathan Woody (who makes a walk-on appearance in the Rameau). END_OF_DOCUMENT_TOKEN_TO_BE_REPLACED

Now that live concerts are beginning to proliferate, it was delightful to hear Oberlin cello professor Darrett Adkins ring a change on the solo suite format with his Hypersuite No. 3 on September 28 in the Cirigliano Studio Theatre at Lorain County Community College. His program opened the new season of Signature Series performances in Elyria, and was dedicated to the memory of Eva Hornyak. END_OF_DOCUMENT_TOKEN_TO_BE_REPLACED