I Am Sitting in A Room is a 45-minute magic act: it makes the artist’s baritone disappear into the ambient reverberations of the recording space. Lamprea’s Unaccompanied: Tiny Works for Quarantine project, by contrast, shrinks durations to between eighteen seconds and four minutes, her ringing coloratura in sharp relief. Where Lucier takes advantage of his tape deck’s low fidelity to catch more echo than original sound, Lamprea records in crisp digital audio, the drop to silence between her phrases amplifying her aloneness.

Newly relevant as historical compositions like Lucier’s may feel, new-music performers like Lamprea, shorn of audiences, venues, and expected income, are posting videos and streams by the dozen, responding to the crisis in form as well as content.

Since March, Lamprea has been commissioning what she terms “tiny works” from composers, then posting videos of the practice and recording sessions to her social media profiles. The soprano has made two volumes of recordings of these pieces available for sale on Bandcamp. The first entries in a grand scheme of indefinite duration, Unaccompanied Volumes 1 and 2 find composers thriving within the constraints of extreme brevity, and Lamprea carving sublime, beautiful, comic, and haunting scenes of isolation that come to life upon pressing play.

The track list of Volume 1 opens where the project began: with Matthew Kennedy’s Miniatures for One. Only the first movement, “Boston, MA,” appears here, making for a bracing introduction to Lamprea’s voice. A fanfare leads to some of the high vocal acrobatics that define the coloratura voice type, with concluding phrases melting or skipping like stones on water. It can be easy to miss the song’s lone chopped-up lyric: tiramisu, Lamprea’s dessert of choice.

Elijah Shiffer makes successive one-letter changes to words that end in “-ing” to create the text of his song From Parting to Longing, often landing on words that hold new associations in light of the pandemic. Lamprea makes the most of Shiffer’s text-painting, rising to thrilling intensity for the central words “singing, ringing.” 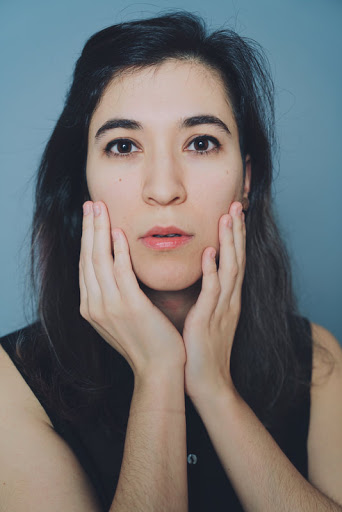 Anthony Donofrio’s Light in the Collapsing Lens II finds Lamprea in her high register, stepping like a tightrope walker between individual notes, pauses, and longer phrases. Where that piece haunts, David Leon’s I am a Goofus puts music spanning from vocal fry to a squeak at the peak of Lamprea’s range in the service of comedy. The same goes for William Peacock’s Allergies Not So Bad, a complaint about spring congestion enlivened by pop song-like rhymes and a soaring melody comically incommensurate with the subject matter.

Until Lamprea whispers the final word, Martin Gaughan’s The Sweet Sound Within sounds like it could be an unhinged cadenza to the coloratura aria with which it shares most of a title: “Il dolce suono,” the mad scene in Donizetti’s Lucia di Lammermoor. Where Gaughan crams many ideas into a tight space, Michael Berkowitz gives Lamprea space to explore simple, quasi-improvisatory sounds in Boum. Each piece, however, lasts around 80 seconds.

By dividing The Whitewashed Wall into three distinct movements, James Banner gives the singer multiple opportunities to show off elements of her virtuosity. “Why does she turn…?” offers leaping contours and a climactic high note, while “Well, once…” imposes a strict, swift tempo onto the melody. “My brush goes one with a rush…”, frenetic and clearly meant to push the singer to the very upper limit of her range, comes off as a controlled detonation.

“I am reaching, reaching out,” sings Lamprea to the unfurling tune of Kimberly Osberg’s Something About Isolation, a slow movement in this symphony of micro-moods. The highlight of Volume 1 arrives at the end, when Caitlin Cawley’s Birdwatching compresses a world of specific feeling and experience into 57 seconds, about half of them silent. The directions instruct the singer to transcribe birdsong on a walk, match a given text to the resulting tunes, and surround these islands of sound with oceans of nothingness. The result is a creative masterstroke, three gorgeous moments suspended like paintings in a white-walled gallery. 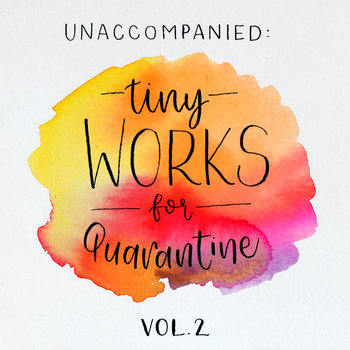 Volume 2 opens simply, with two-note statements of a word. However, Héloïse Werner, a fellow experimental soprano as well as a composer, could hardly have left Lamprea with such basic material in …a lockdown tune… Before long, consonant and vowel sounds detach from one another and range-spanning leaps come into play as anxiety mounts. Lesley Mok’s delicate ballad In Case of Complete Reversal offers a contrast, as emotionally cool at its end as at its beginning.

Lamprea builds to peaks of activity at the center and three-quarter points of Caedmon’s Hymn by Edward Nesbit, otherwise spinning out one of the more traditionally operatic-feeling melodies of these volumes. Over the course of a minute, Ian Wiese’s I Am, I Was goes from panicked self-affirmations and breath sounds to a concluding “I was…” — a simple expression of the feeling that we have all entered a new era and left parts of ourselves behind in the process.

Christopher Schlechte-Bond’s Grow! finds a human narrator singing to a raspberry bush, so impatient that the tapping of Lamprea’s fingers finds its way into the recording. Alex Eddington’s Ode to Bubblewrap is one of the least tiny and most memorable compositions of the lot. Lamprea performs the role of the packing material-obsessed narrator with deranged gusto, singing while popping a sheet of the product during four minutes of unsettling language and swooping melodies.

Alan Theisen comes the closest to Germanic modernism on this album with his Ich kreise um Gott, an angular, angst-filled setting of Rilke. Nicole DeMaio’s Going is a song for all of us, its spoken interjections — “I don’t want to go!” — faithfully rendered by Lamprea and very apt for a moment when we all feel dragged into a world we did not ask for.

As with Volume 1, Lamprea wisely places a gorgeous slow piece second to last. Her inhalations audible, she makes Drew Swatosh’s gentle Vulnerability sound the way calming down after a moment of panic feels. To conclude, the soprano juxtaposes urgent sound with silence in Cecilia Muylaert’s L(a. In setting the eponymous poem by e.e. cummings, consisting of the word “loneliness” parenthetically interrupted by the phrase “a leaf falls,” the song soothes but also unsettles: will we still feel the loneliness of quarantine when the leaves are falling?

At a minimum price of $5 — Bandcamp allows users to pay more to benefit artists — and lasting under twelve and twenty minutes respectively, these albums make for an unmissable and profoundly rewarding investment of money, time, and attention. Interested listeners can sign up to attend a live-streamed concert by Lamprea featuring several of these works as well as others on Thursday, May 28 at 12:00 pm EDT, and learn more about her other live performances at her page on Patreon.

Published on ClevelandClassical.com May 21, 2020.