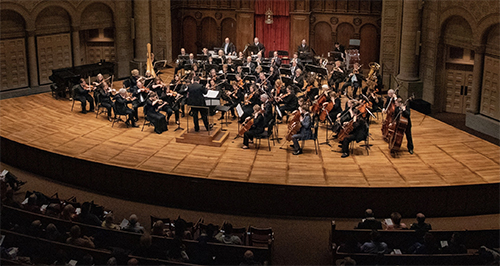 The best children’s music, like the best children’s literature, has something in it for the adults. Wisely, the Suburban Symphony Orchestra put together a family concert on December 8 at the Maltz Performing Arts Center that could appeal to young and old alike. Ravel’s delicate, miniature Mother Goose Suite made up the brief first half of the program, but Lemony Snicket’s The Composer is Dead, with music by Nathaniel Stookey, was the real family fare for the afternoon. It’s the kind of piece you expect on a children’s program — a guide to the orchestra à la Benjamin Britten or Prokofiev’s Peter and the Wolf — but with enough style and irony to keep even the most jaded listener engaged.

Structured as a whodunit, with the composer the victim, the sections of the orchestra as the suspects, and a narrator who plays detective (on Sunday, portrayed with leading-man dignity by Linn Obery), Snicket’s story isn’t really a mystery at all. More accurately, The Composer is Dead offers a crash course in postmodernism, stuffed full of allusions, delivered with a wink, and bolstered by the pastiche framework of a murder mystery. The extravagant pen name of Lemony Snicket, adopted by author Daniel Handler first for A Series of Unfortunate Events and later for his other children’s work, drives home the point.

Perhaps inevitably, Handler’s writing outshines Stookey’s score. The story gets something fundamentally right about playing in an orchestra — it’s a gossipy place. But the music doesn’t achieve the level of personality of Prokofiev’s animal characters or Britten’s distinctive instrument families. Stookey’s most tuneful motif, a waltz built up by the string section, can’t carry the whole piece. And the smarmy character Handler assigns to the reed instruments doesn’t get music to match. Throughout, the Suburban Symphony musicians, conducted by music director Domenico Boyagian, approached their parts gamely.

The music’s climax, a mad dash through the orchestral repertoire (from the funeral march of Beethoven’s Eroica to the “Sacrificial Dance” of Stravinsky’s The Rite of Spring), never moves beyond a medley of snippets. In contrast, the narrative’s ultimate reveal — that all the musicians were in on the murder together (“All of us have butchered a composer at one time or another”) — is a joke, a reworking of Murder on the Orient Express, and a satisfying conclusion in itself. The contrasting success of literary and musical allusions confirms the imbalance between story and score.

Musically speaking, Ravel’s Mother Goose Suite offered a better introduction to the instruments of the orchestra. Ravel’s orchestrations make excellent, generous use of the wind section, though on Sunday, solo lines needed to be louder across the board. In some movements, it was a question of interpretation. “Pavane of Sleeping Beauty” and “Little Tom Thumb” could benefit from a more relaxed reading of Ravel’s persistent, soft dynamics. With others, like “Laideronnette, Princess of the Pagodas,” the challenge comes from the ensemble. Ravel’s accompaniment, while not exactly thick, does somehow bury the woodwind melodies.

Low contrabassoon notes brought out the beast-like qualities in “Beauty and the Beast,” and the final movement, “The Enchanted Garden,” showcased the orchestra at its best: chorale-like string playing and an expressive, communicative duet between concertmaster Sara Beam and principal viola Micaela Murphy. That last movement, with its mix of magic and triumph, evoked another finale, from Stravinsky’s The Firebird — the kind of subtle allusion at which orchestral music excels.