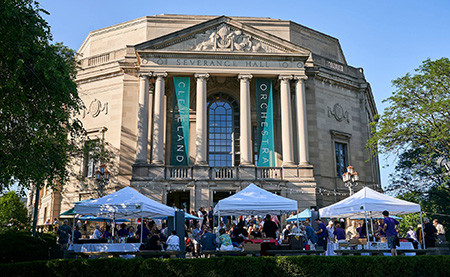 Making his only summer appearance with The Cleveland Orchestra, music director Franz Welser-Möst led the ensemble in an eventful hour-long program on Friday evening, July 12 in Severance Hall. The first concert in the Summers@Severance series, preceded and followed by drinks and food on the terrace, was a festive occasion that attracted a large audience, some got up as if headed for an English garden party, others dressing down for the steamy weather. Once inside the hall, they were so enthusiastic about the music that applause was ubiquitous and hearty.

The largest of the two works came first: Mahler’s Songs of a Wayfarer pitted the fine German baritone Ludwig Mittelhammer against a large orchestra. Surrounded but not defeated, thanks to Mahler’s fastidious orchestration and the transparency that The Cleveland Orchestra brings to complex textures, he carried splendidly over the ensemble except in a few climactic moments.

The composer wrote the poetry for the four Wayfarer songs himself, chronicling a personal journey similar to Schubert’s Winterreise. The second, Ging heut’ Morgens übers Feld, shares its material with the first movement of Mahler’s First Symphony and establishes the emotional mood of the set: though surrounded by all the glittering beauty of the natural world, the poet will never find happiness, and even longs for death to end his despair. 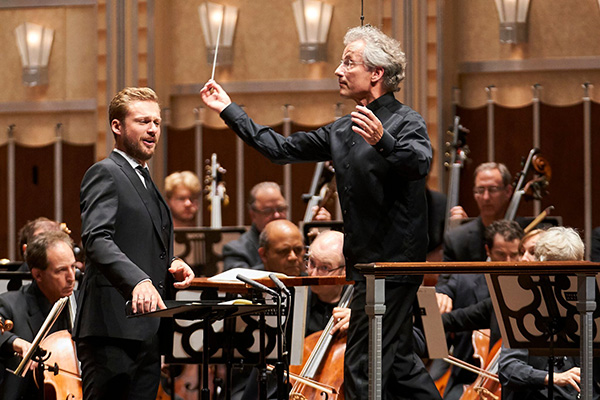 Mittelhammer had only about fifteen minutes to make an impression on Friday evening, but his splendid diction and ardent delivery of Mahler’s vocal lines added up to a memorable performance. Welser-Möst expertly paced the songs, which were further distinguished by lovely, nuanced wind playing.

Those winds (along with brass and percussion) having left the stage, the double basses redeployed across the back of the stage for Welser-Möst’s string orchestra version of Beethoven’s String Quartet No. 15.

The composer’s next-to-last quartet is well known for its affecting Heiliger Dankgesang movement, Beethoven’s song of thanks to the Deity for his recovery from a life-threatening illness. A lesser-known fact, ironic for contemporary musicians who imagine they’re doing something new by playing in non-traditional venues, is that the piece was first performed in 1825 in the Viennese tavern “Zum wilden Mann.” 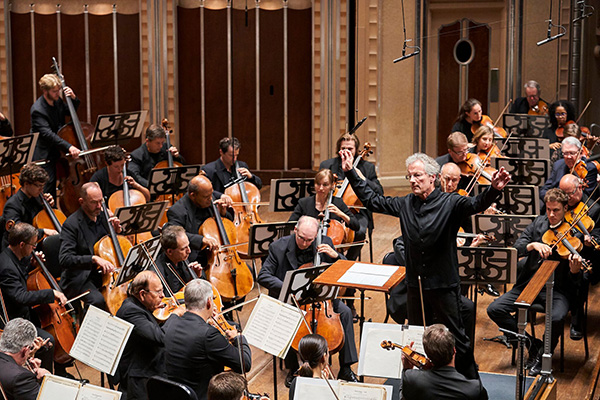 Like his arrangement of the Große Fuge, Welser-Möst’s adaptation of the Op. 132 quartet has both its pluses and minuses. Many passages gain heft and gravitas (especially the Dankgesang), at the expense of the intensity that one-player-on-a-part quartets can achieve. On the other hand, having many players on hand dramatically increases the dynamic range of the work in both directions, but especially in the pianissimos — which were exquisite on Friday.

The violins, headed up by concertmaster Peter Otto, were particularly impressive, achieving a miraculous single mindedness in fast passages, and Welser-Möst gave Otto a fine solo opportunity in the cadenza that led into the finale. But the most transformative aspect of the string orchestra arrangement is the frequent octave doubling of the cello part, a role in which the Cleveland bass section covered themselves in glory.

Music director and conductor Daniel Meyer built his playlist around Cleveland themes and scenes. “Exploration CLE” made use of engaging selections from the classical canon and beyond that celebrated “what makes Cleveland so special.” Happily, he and his musicians avoided constructing a visual slide show, choosing to let the music speak for itself. END_OF_DOCUMENT_TOKEN_TO_BE_REPLACED

You could see the relationship at work on a practical level. Repertoire for two players at the same piano requires a certain choreography. There’s just one of each pedal to share, and the hand crossings left and right — which can be so fun to watch a soloist pull off — get more complicated when another person’s involved. At times, Pompa-Baldi drew a hand away from the keyboard and into his body, making room for Friscioni, and at the close of a few delicate phrases, the two were crouched together over the same final notes at one end of the instrument. END_OF_DOCUMENT_TOKEN_TO_BE_REPLACED

The signature sounds of these famous film scores are not so much John Williams’ invention as allusions to other classical pieces. The foreboding half-step from Jaws, growing more and more furious in the cellos and basses, shares something with Dvořák’s “New World” Symphony and Bartok’s Miraculous Mandarin. END_OF_DOCUMENT_TOKEN_TO_BE_REPLACED