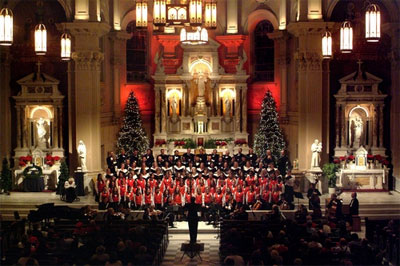 On Saturday evening in Akron’s St. Bernard’s Church, the Summit Choral Society gave the second of three Christmas Candlelight Concerts, to a full house, proving that a Christmas concert can offer both substantial and lighter fare and remain thoroughly engaging without resorting to the false allure of tinsel-pop. The two-hour-long program featured the adult Masterworks Chorale, as well as the Society’s youth ensembles — the Touring Choir, Concert Choir and 2014 Alumni Choir — in a dozen selections, many of them written in the last decade or so.

Celebrating its 25th season under the leadership of Frank C. Jacobs, who will retire at the end of the season, the Masterworks Chorale joined the Concert Choir in the opening work. Selections from the late Dave Brubeck’s La Fiesta de la Posada (1976), a Mexican-inspired 1976 cantata full of charm and spirit, were accompanied by a mariachi-style ensemble, and featured Oberlin student soprano Julie Crookston as the fine soloist in a setting of the Magnificat.

After the first of three audience sing-along carols, oboist Danna Sundet and flutists George Pope and Jane Berkner added colorful instrumental lines to three selections from the Touring Choir led by Heather Cooper. Jeffrey L. Ames’s utterly lovely Canticle of Mary was followed by Gregory Hoepfner’s striking Mary Shivered, and Nancy Hill Cobb’s Gloria!, the latter a finale to the first half of the program that allowed the excellent young ensemble to ring out with full voice. 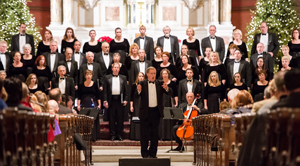 Carl Jenkins’s Benedictus from The Armed Man — a Mass for Peace brought the Masterworks Chorale and Touring Choir down the aisles in a meditative, candlelit processional with cello solo by Greg Fiocca and atmospheric organ accompaniment by Robert Mollard, who also accompanied the sing-alongs and served as the excellent pianist for the Chorale.

Jeffrey L. Ames’s strophic, 2009 setting of The World of our Dreams was adorned by a second solo by Julie Crookson and Danna Sundet’s soulful oboe obliggato. Ola Gjeilo’s Pleni sunt caeli et terra Gloria Tua (2010) reprised the gauzy choral textures of the Chilcott (Fiocca returned to supply an expressive a cello solo) and trumpets added a disquieting color to Jenkins’s Agnus Dei, also from The Armed Man (a modern version of the Renaissance masses based on the mysterious tune, L’homme armé).

A second audience sing-along introduced the 2014 Summit Choral Society Alumni Choir, an ensemble that pitched some thirty sopranos and altos against four stalwart male voices — who bravely managed to hold their own. Led by Arlene Jacobs with Kathy Reichenberger at the piano, the choir sang Stan Pethel’s catchy 2012 Carol for Christmastide while processing in, followed by Joel Raney’s 2010 Celtic Christmas Lullaby (decorated with flute and cello) and John Rutter’s predictably attractive Love came down at Christmas (2013).

Filling the aisles and the space at the back of the nave, the combined choirs created atmospheric surround sound for three stanzas of Away in a Manger arranged by three different composers, and ended with the a final sing-along, Silent Night.

This was an alluring evening of choral music, carefully chosen, lovingly performed and imaginatively choreographed to bring the whole interior space of St. Bernard’s into play. The three ensembles of young singers made outstanding contributions to the success of the program. One hopes they’ll return in a few years to join the ranks of the Masterworks Chorale.

Northeast Ohio’s Les Délices has long been that rarest of beasts: a world-class organization so proud of its region (ours) and repertoire (distinct niches in pre-1800 music) that it never tries to be everything to everyone, paradoxically making a strong case for a broad, curious international following. In the December episode of its SalonEra series, the ensemble embraces its strengths and community to marvelous effect. END_OF_DOCUMENT_TOKEN_TO_BE_REPLACED

END_OF_DOCUMENT_TOKEN_TO_BE_REPLACED

Another I remember fondly is Gian Carlo Menotti’s Amahl and the Night Visitors.  Commissioned by NBC, the one act, made-for-television opera, premiered on December 24, 1951, at the network’s studios in New York’s Rockefeller Center. And now, through the wonders of technology, Cleveland Opera Theater has created a magical new production of the work which is available on demand through January 6, 2021 (Three Kings Day). END_OF_DOCUMENT_TOKEN_TO_BE_REPLACED

Jessen has now followed up with her second solo CD, Winter Chapel. Recorded on January 17, 2020 in Oberlin College’s Fairchild Chapel and available on Carrier Records, the album is a continuum in Jessen’s journey to push the musical boundaries of her instrument and herself as an improviser. END_OF_DOCUMENT_TOKEN_TO_BE_REPLACED