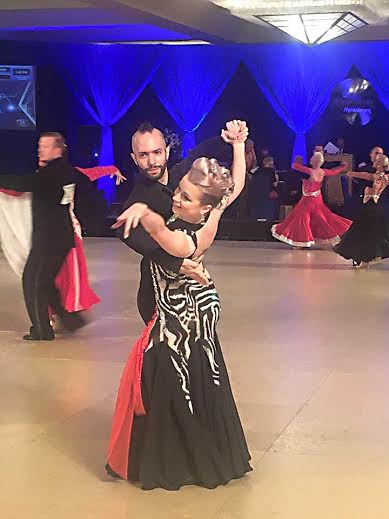 Choral societies usually cap their seasons off with a big oratorio, but Summit Choral Society artistic director Marie Bucoy-Calavan has other plans for the 65 singers in her Masterworks Chorale this weekend. As the conclusion to her first season with the ensemble, Bucoy-Calavan will share her dual love of choral music and ballroom dancing with the audience at Akron’s event center Tangier on Sunday afternoon, April 10 at 3:00 pm. “Dance With Me” will feature dance-based choral music by Johannes Brahms, Carl Orff, and Cole Porter — and more.

In a telephone conversation, Bucoy-Calavan noted that she used to be a competitive ballroom dancer herself. “I thought it would be a cool idea to combine two of my passions in the same program.

“The ballroom dancing craze continues. Dancing With The Stars is still on the air, and it’s an art form that engages older generations as well as younger adults. I’m also a real fan of multi-media and of combining different art forms The arts should be supporting each other, and it’s a great way of reaching new audience members.”

The program on Sunday will begin with listening and watching. Later, the audience will get involved in a novel way. “We’ll be performing all 18 of Brahms’s Op. 18 Liebeslieder Waltzes with pianists Karen Prasser and Beverly Kalasky and two professional ballroom dance couples from Viva Dance studio in Cleveland. The Brahms pieces were originally parlor songs for vocal quartet and piano four-hands. In our performance, we’ll vary the texture by singing some of them with the full Summit Choral Society, then the rest with soloists and different small groups.” 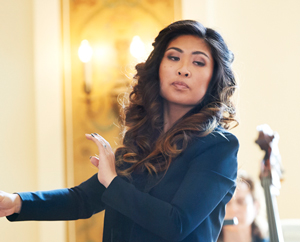 Bucoy-Calavan will then turn the clock back to the middle ages with selections from Part Two of Carl Orff’s Carmina Burana in an arrangement for chorus, four-hand piano and percussion. “Two modern dancers, Brian Murphy and Brooke Wesner, will join us in a couple of numbers from the ‘Uf dem Anger’ section of Orff’s popular work,” Bucoy-Calavan said. “They’ll also dance to two of four selections we’ll be singing from Brahms’s ‘Gypsy Songs’ or Ziguenerlieder. The Viva Dance couples will also appear in a choral arrangement of Cole Porter’s Night and Day, which is a rhumba.” Patrons will also enjoy Thomas Morley’s dance-inspired Renaissance madrigal, Now is the Month of Maying.

For this program, the Tangier ballroom will be set up with a stage along one side, and audience members will be seated at round, 10-top tables surrounding a dance area, “like at a wedding reception,” Bucoy-Calavan said. After the choral portion of the program, the interactive fun will begin.

“At the end, instead of holding Summit Choral Society’s traditional meet-the-artist reception, Parker Amsel will teach a free ballroom dance class followed by a social dance hour,” Bucoy-Calavan said. “Appetizers will be served, and a cash bar will be available. This will give the audience the opportunity to learn how to ballroom dance — if they don’t already know the steps — and to socialize with the singers as well.”

As she nears the end of her inaugural season, what are Marie Bucoy-Calavan’s plans for 2016-2017? “Things haven’t been entirely cleared with the board yet, but I can tell you that Summit Choral Society will collaborate with the Akron Symphony Chorus in a performance of Beethoven’s ninth symphony with Benjamin Zander. Then in May, we’ll add my University of Akron Chorus to the Summit and Akron Symphony choruses for a performance of Mendelssohn’s Elijah with the Akron Symphony.”

“Dance With Me” will take place on Sunday, April 17 at 3:00 pm at Tangier, 532 W. Market Street in Akron. Tickets can be reserved online.