Since its founding, Quire Cleveland has presented concerts that connect audiences to the past through passionate performances of choral works from the Middle Ages, Renaissance and Baroque eras, and beyond. One highly anticipated concert is Quire’s annual performance of Carols for Quire. Beginning on Friday, December 20 with performances through Sunday, December 22 at Trinity Cathedral, Quire Cleveland under the direction of Ross W. Duffin, will present the 2013 edition of this popular annual event.

“This is the fifth year in a row that we’ve done this, said Quire’s founding Artistic Director Ross W. Duffin. “It’s become a tradition. I think audiences have come to expect it and I know we certainly look forward to it.” Although Quire’s programs generally focus on early choral repertoire, this year’s Carols for Quire will be a bit of a departure for the ensemble. END_OF_DOCUMENT_TOKEN_TO_BE_REPLACED 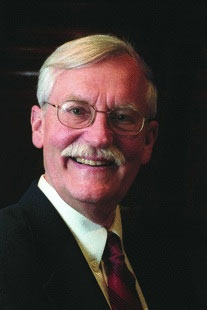 Quire Cleveland will celebrate Memorial Day weekend with an all-Palestrina concert at Historic St. Peter’s Church in downtown Cleveland on Saturday evening, May 25. Quire’s founders, Ross W. Duffin and Beverly Simmons, have invited a distinguished choral specialist to guest conduct the professional ensemble for the occasion: Jameson Marvin, who retired last year after thirty-two years as director of choral activities at Harvard, including the Harvard Glee Club, the Harvard-Radcliffe Collegium Musicum and the Radcliffe Choral Society (Marvin’s last Cleveland appearance was with the Glee Club in March of 2010).

The Quire Cleveland invitation came about through personal connections, he told us in a phone call from his home in Lexington, MA. “Ross and Bev’s son David sang with the Collegium when he was at Harvard. They came to several concerts and really liked what we were doing, especially with Renaissance polyphony. Interestingly, I had met Bev at workshops I offered in the White Mountains of New Hampshire in the summer of 1979 and 1980. The fact that Ross and Bev went to Stanford the same time I did means that we see things similarly, though they’ve gone much more in depth into musicological areas and I into performance areas. When they came to Cambridge, I would see Ross after concerts and he told me about Quire Cleveland and invited me to come and conduct the group at some convenient time.” END_OF_DOCUMENT_TOKEN_TO_BE_REPLACED

We begin with the world premiere recording of Okeanos, Bernd Richard Deutsch’s concerto for organ and orchestra, featuring Paul Jacobs as soloist. The title refers not only to the Titan of Greek mythology, but also “to an idea of immense (and sometimes unfathomable) greatness and breadth, which conjures up in my mind the thought of the organ,” as Deutsch writes in his notes. END_OF_DOCUMENT_TOKEN_TO_BE_REPLACED

If you haven’t already warmed up to French Baroque clavecin music, Chicago-based keyboardist Jory Vinikour’s L’Unique: Harpsichord Music of François Couperin should make a strong impression on your musical tastes. The most prominent member of a musical dynasty second only to the German Bachs, François Couperin left a large treasure trove of keyboard works, 234 in all, arranged in 24 suites or Ordres.  END_OF_DOCUMENT_TOKEN_TO_BE_REPLACED

After weeks of watching online streams of archived concerts and ad hoc performances from quarantined musicians’ living rooms and bedrooms, it was thrilling to be able to advertise, preview, and report on two real-time webcasts last Friday and Saturday that embraced high production values and addressed the persistent issue of how to compensate musicians for online services. Saturday afternoon’s joint recital by Colin Davin and Jason Vieaux was sponsored by the Cleveland International Classical Guitar Festival, whose 2020 iteration, scheduled for that weekend at the Cleveland Institute of Music, vanished in the wake of the pandemic. END_OF_DOCUMENT_TOKEN_TO_BE_REPLACED