The twelfth annual Classical Guitar Weekend was distinguished by four outstanding concerts by Pavel Steidl, Gaëlle Solal, SoloDuo and Jason Vieaux with soprano Jung Eun Oh; three excellent and informative lectures by luthier Bernhard Kresse, guitarist Jonathan Fitzgerald and record producer Alan Bise; and record audiences showed up for performances, talks and master classes over a three-day span from June 1-3 at the Cleveland Institute of Music. For the first time, Classical Guitar Weekend took on the air of a real festival chock full of delights for guitar enthusiasts as well as for music lovers in general, for which artistic director Armin Kelly deserves an up-front round of applause. 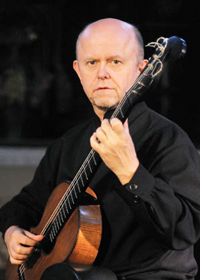 Pavel Steidl chose his Friday evening program with a particular instrument in mind: a reproduction of a nineteenth century Stauffer instrument made by Bernhard Kresse. In an interview, Kresse contrasted it to the modern guitar as “the difference between a limousine and a sports car with the same engine”. Indeed, Steidl took us on a brisk and thrilling road trip through music by Johann Kaspar Mertz, Niccolò Paganini, J.S. Bach, Fernando Sor and Zani de Ferranti, showing us how well the smaller, peppier instrument responded in the areas of color, speed, articulation and ornamentation.

Pavel Steidl is an animated performer who uses his hands, his feet and his facial expressions as well as the guitar to put the essence of the music across. The Mertz pieces featured colorful harmonies, toccata-like gestures, lyrical stretches and cheerful, humorous moments that Steidl played brilliantly and footnoted with his body motions. END_OF_DOCUMENT_TOKEN_TO_BE_REPLACED

END_OF_DOCUMENT_TOKEN_TO_BE_REPLACED

Rodgers & Hammerstein’s Cinderella was originally produced for television in 1957 — seven years after the animated Disney film was released — and starred Julie Andrews. According to the Rodgers & Hammerstein website, it was viewed by over 100 million people. END_OF_DOCUMENT_TOKEN_TO_BE_REPLACED

The story line has its origin in an 1855 play and an 1842 farce that Thornton Wilder mined for his 1938 play The Merchant of Yonkers. When that turned out to be a flop, in 1954 Wilder made the crucial decision to re-center the show around the character of the legendary marriage broker Dolly Gallagher Levi and renamed it The Matchmaker. END_OF_DOCUMENT_TOKEN_TO_BE_REPLACED

The Dodero Center for the Performing Arts at the Gilmore Academy in Gates Mills is one feature of an impressive campus. The auditorium is shallow, the stage is deep, and the ensemble played without a shell. Throughout the program, the sound, especially in instruments’ lower registers, tended to disappear. END_OF_DOCUMENT_TOKEN_TO_BE_REPLACED