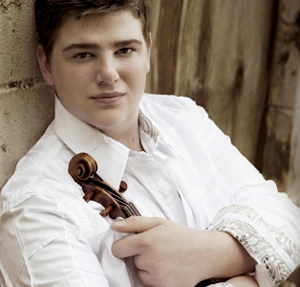 As the oldest award of its kind in the United States, the Cleveland Arts Prize was established to “support and encourage artists, and to promote public awareness of artistic creativity in Northeast Ohio through the work of Arts Prize recipients.” Each year prizes are awarded to “creative artists whose original work has made Northeast Ohio a more exciting place to live…” On June 27 the 2013 Cleveland Arts Prize winners were honored at a ceremony held at the Cleveland Museum of Art. This year’s winner of the Emerging Artist Award (music and dance) was 19-year old violinist Chad Hoopes.

Hoopes first burst onto the international music scene after winning the Young Artists Division of the Yehudi Menuhin International Violin Competition. Since that time he has gone on to perform with many of the world’s distinguished orchestras. During the 2011-12 season, Hoopes served as Artist-in-Residence for Classical Minnesota Public Radio during which he played concerts throughout the greater Minneapolis/St. Paul area as well as participating in and leading educational activities at local schools. This past spring Hoopes graduated from University School as well as completing his studies at the Cleveland Institute of Music’s Young Artist Program.

A truly engaging and thoughtful conversationalist, Chad Hoopes recently spoke to us by telephone from Staunton, Virginia where he was serving as Artist-in-Residence at the Heifetz International Music Institute. During the conversation he spoke about the important role his family plays in keeping him grounded, how winning the Cleveland Arts Prize will help to further his career and how he feels obliged and honored to be an ambassador for the city of Cleveland as well as for classical music. We began by asking him what his duties are as Artist-in-Residence. END_OF_DOCUMENT_TOKEN_TO_BE_REPLACED