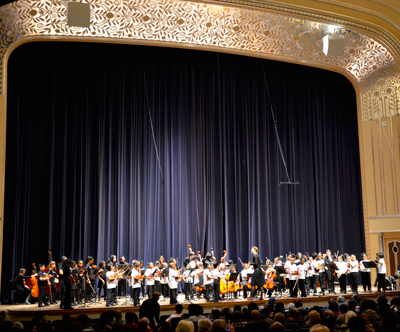 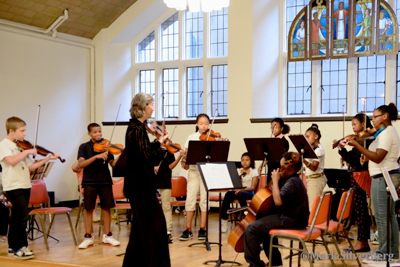 The young string players of El Sistema @ Rainey and El Sistema University Circle will be featured during the Martin Luther King Day open house at Severance Hall on Monday, January 20 in a one-hour performance beginning at 3:00 pm.

Two of Cleveland’s El Sistema programs were launched by Cleveland Orchestra violinist Isabel Trautwein, who established her first program at the Rainey Institute in Cleveland’s Hough neighborhood three years ago after studying El Sistema principles in Boston and Venezuela during a sabbatical from the orchestra. She established the University Circle program last fall.

Trautwein invited ClevelandClassical to follow El Sistema University Circle. We observed six sessions including rehearsals and private lessons on Friday afternoons between October and mid-November, with a follow-up visit on January 9.

What is this phenomenon called El Sistema? It seems to have taken musical education around the globe by storm and has led to the creation of organizations like The National Alliance of El Sistema-Inspired Programs in the United States— many of which have connections to music schools and symphony orchestras. END_OF_DOCUMENT_TOKEN_TO_BE_REPLACED

Liza Grossman and the Contemporary Youth Orchestra always pack their concerts full of content, and the opening concert of the ensemble’s nineteenth season on December 7 in Waetjen Auditorium at Cleveland State University continued in that tradition. In addition to two solo orchestra works and a concerto, CYO invited Isabel Trautwein and the young string players of El Sistema @ University Circle for a side-by-side, and welcomed The Oblivion Project for half a dozen nuevo tango pieces by Astor Piazzolla.

CYO and its dynamic conductor raised the curtain with John Adams’s high-energy overture, Short Ride in a Fast Machine. Driven by the pervasive rhythm of a wood block and propelled by an excellent brass section, the piece raced along like the top-performance sports car it invokes and safely arrived at its destination (and with no white knuckles on the curves!) END_OF_DOCUMENT_TOKEN_TO_BE_REPLACED

END_OF_DOCUMENT_TOKEN_TO_BE_REPLACED

The strings-only work by Berg has made relatively frequent appearances on the Orchestra’s programs. In 2021, the musicians recorded it for the In Focus series, and it appeared again on last year’s European tour. Friday’s rendition maintained the group’s characteristic light and effortless playing, each section blending as much as possible to echo the work’s original form as a string quartet. At fifteen minutes total, the piece is quite short, but the dense encoded musical meanings require some extra-attentive listening. Splitting up the three movements ensured that each one could be appreciated on its own. END_OF_DOCUMENT_TOKEN_TO_BE_REPLACED