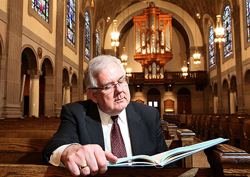 How did this project come about? The Covenant’s music director and organist Jonathan Moyer told us that soon after he arrived in Cleveland, a renovation project took quite a different turn. “Originally there was an Aeolian-Skinner antiphonal organ in the gallery that was much in need of repair or replacement. The granddaughter of the original donor, who was still alive at the time wanted to donate the funds. She actually gave us too much money.” END_OF_DOCUMENT_TOKEN_TO_BE_REPLACED

END_OF_DOCUMENT_TOKEN_TO_BE_REPLACED

Concerts cancelled in 2020 may have put a brief gap in Ling’s record with the Orchestra (a program every season since 1984-1985), but the ensemble’s former resident conductor more than made up for it Sunday with a performance both commanding and personal. END_OF_DOCUMENT_TOKEN_TO_BE_REPLACED