The burning question after The Cleveland Orchestra’s concert on Thursday April 24 was why it took so long to bring conductor Jane Glover and pianist Imogen Cooper — either singly or together — to Severance Hall. The two British artists collaborated to produce a spectacular performance of Beethoven’s first concerto, and Glover led pristine and loveable readings of sinfonias by C.P.E. Bach and Johann Baptist Waṅhal* as well as a finely shaped account of Haydn’s “Drum Roll” symphony.

Glover set up a bright, sprightly introduction for Cooper in the Beethoven (the pared-down string section allowed the orchestra to play with amazing transparency). Responding with verve and an effortless elegance, Cooper breezed through her passagework, made perfect joins with Glover and the orchestra and pointed up exquisite moments like the sudden shift into E-flat. The recapitulation of the first movement was announced by a surprising blaze of horns and Cooper’s initially calm, orderly cadenza suddenly jolted the ear with wild chord juxtapositions. “She’s fantastic!” cried a woman in the row behind me. No shushing and no argument there. END_OF_DOCUMENT_TOKEN_TO_BE_REPLACED 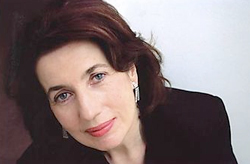 British pianist Imogen Cooper and British conductor Jane Glover will both be making their Severance Hall and Cleveland Orchestra debuts this weekend. I reached Imogen Cooper in London to talk about Beethoven’s first piano concerto, a piece that I tell her still gives me goose bumps and puts me in a good mood every time I hear it.

Cooper agrees. “I’m glad to hear you say that. I have played it a lot but each time I do, I think of what a masterpiece it is. It requires inner and outer energy, vast amounts of it, because it needs some very fast tempi. The first movement is definitely an allegro con brio and not an allegro maestoso.”

The pianist recently saw a 1970s performance on YouTube that supported her view. “It was incredibly ponderous and slow. That is the way you used to hear Beethoven #1 in those days: tempi much slower, much heavier, a very big orchestra. I must say that I don’t really see it like that. I think the first movement should go like the wind. It’s also such an incredibly witty work. During the outer movements we should be smiling a lot of the time. And that extraordinary middle movement in such an unexpected key as A-flat is so glorious.” END_OF_DOCUMENT_TOKEN_TO_BE_REPLACED

It might seem that there’s not a lot left to discover after three decades of experience with the Red Priest’s charming and evocative score, but this performance boasted a secret weapon: the young Spanish violinist Francisco Fullana, now the Orchestra’s artist-in-residence, whose affecting personality and easy virtuosity raised the solo part a quantum leap above the merely extraordinary. END_OF_DOCUMENT_TOKEN_TO_BE_REPLACED

END_OF_DOCUMENT_TOKEN_TO_BE_REPLACED

The Cleveland Orchestra’s second performance of the new season on Sunday afternoon, October 17 at the newly renamed Mandel Hall at Severance Music Center was just such an occasion. If the ensemble’s return to public concerts under the baton of Franz Welser-Möst wasn’t enough reason to light a bonfire, the Cleveland debut of a new work written for one of the Orchestra’s most popular soloists, and the swan song of one of its longest-serving members added extra fuel to the celebration. END_OF_DOCUMENT_TOKEN_TO_BE_REPLACED