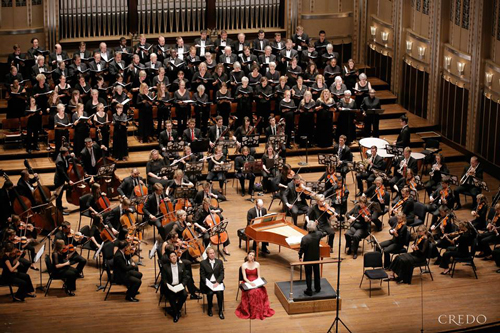 Joy, wonderment, thanksgiving, love. These are the feelings Haydn sought to express toward the Divine in The Creation, but they apply equally well to the work itself. Haydn’s bliss and awe in the face of nature, his gratitude for the world, and the love between Adam and Eve are embodied so perfectly in music that an audience can’t help but be overwhelmed by them as well. It’s impossible to come away from a performance of The Creation without a happy heart.

This was certainly true on July 19th in Severance Hall, when John Nelson conducted the Credo Festival Orchestra and Chorus in a rousing performance of The Creation with soprano Lisette Oropesa, tenor John Tessier and bass Adam Lau. END_OF_DOCUMENT_TOKEN_TO_BE_REPLACED 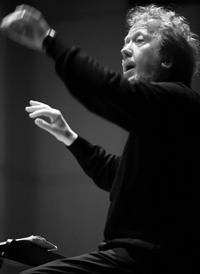 Conductor John Nelson has had a long career. Born in Costa Rica to American parents in 1941, he has been Music Director of the Indianapolis Symphony, Opera Theatre of St. Louis, and the Orchestre de chamber de Paris, has become a renowned opera conductor and interpreter of large Romantic and sacred choral works, won a Grammy for his recording of Handel’s Semele, and helped found Soli Deo Gloria, an organization which commissions sacred choral music from such respected composers as Christopher Rouse and Augusta Read Thomas.

On July 19 at 7:00 at Severance Hall, Nelson will lead the Credo Festival Orchestra and Chorus in a performance of Haydn’s late oratorio The Creation, which was inspired by Haydn’s visits to England where he heard Handel’s oratorios. END_OF_DOCUMENT_TOKEN_TO_BE_REPLACED

END_OF_DOCUMENT_TOKEN_TO_BE_REPLACED

A new CD by Christa Rakich, who is currently Visiting Professor of Organ at the Oberlin Conservatory, gives a nod in two directions. As its title announces, it’s an homage to her former teacher and colleague, the late Yuko Hayashi, longtime professor at the New England Conservatory and curator of Boston’s Old West Church Organ Series. It’s also the first recording to be made of Richards, Fowkes & Co.’s Opus 16 instrument, built in 2008 for Goodson Chapel of the Duke Divinity School in Durham, North Carolina. END_OF_DOCUMENT_TOKEN_TO_BE_REPLACED

END_OF_DOCUMENT_TOKEN_TO_BE_REPLACED

Hailed by the New York Times as “The Best Classical Music Ensemble of 2018,” Wet Ink Ensemble has lived up to this acclaim once again with their recent release Glossolalia/Lines on Black. The album takes its name from the two extended works by Wet Ink members Alex Mincek (saxophone) and Sam Pluta (electronics). The remainder of the septet includes Eric Wubbels (piano), Erin Lesser (flutes), Ian Antonio (percussion), Josh Modney (violin), and Kate Soper (voice). END_OF_DOCUMENT_TOKEN_TO_BE_REPLACED

Croatian-born pianist Martina Filjak, now living in Berlin, has released her latest album, Light and Darkness, featuring music by Franz Liszt — plus an epilogue by Arvo Pärt. The disc confirms once again all the special technical and interpretive qualities that won her the gold medal at the Cleveland International Piano Competition in 2009. END_OF_DOCUMENT_TOKEN_TO_BE_REPLACED