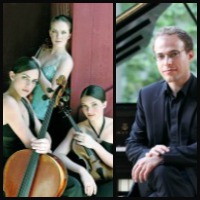 The Albers Trio (Laura Albers, violin, Rebecca Albers, viola, and Julie Albers, cello) and guest pianist Orion Weiss were greeted by a large audience on Tuesday, February 4, in their concert for the Cleveland Chamber Music Society at Plymouth Church UCC in Shaker Heights. This was despite a winter storm warning and steady snowfall as the audience arrived. The concert was a pleasant respite from this year’s seemingly unending blasts of Cleveland winter.

There was a certain down home feeling between the audience and the performers; three of the four have strong Cleveland connections, either through family relationships or study at the Cleveland Institute of Music. The local ties for the concert were further emphasized with some cross-organizational marketing: Richard Fried, the President of the Chamber Music Society, introduced the program and gave the usual plug for future concerts. He then introduced Diana Cohen and Frank Cohen, masterminds of the summer ChamberFest Cleveland, who spoke about the close relationship between the two organizations, as well as with the evening’s performers. END_OF_DOCUMENT_TOKEN_TO_BE_REPLACED