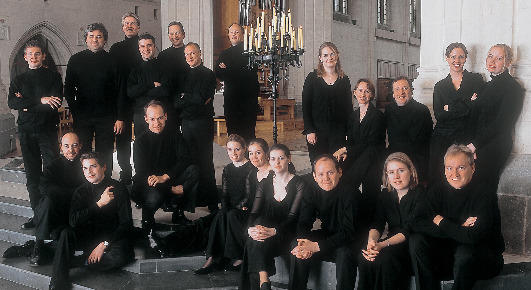 British choral tradition, cultivated for centuries in cathedrals, college chapels and prominent parish churches, has spawned a number of superb, mixed choral ensembles who regularly tour in North America. Tenebrae, a chamber choir founded and directed by Nigel Short, which will perform on the free Helen D. Schubert concert series at St. John’s Cathedral in downtown Cleveland on Wednesday, November 7, offers something a bit different. In Latin, the name means “shadows” (it’s also the name of a trio of dramatic services during Holy Week). Tenebrae chamber choir performances usually invoke a spiritual ambiance through the use of candlelight and special lighting effects, and singers move around ecclesiastical buildings, treating them as real performance spaces.

Short launched Tenebrae in 2001 with concerts in London and Switzerland, after a singing career at both Westminster Abbey and Westminster Cathedral, with the Tallis Scholars, the King’s Consort and the King’s Singers as well as in opera productions with the English National Opera and Opera North. He was so committed to the idea of performing by candlelight that he commissioned ten medieval-style iron candle stands from a Swiss ironmonger, each to hold twenty-five candles. END_OF_DOCUMENT_TOKEN_TO_BE_REPLACED

END_OF_DOCUMENT_TOKEN_TO_BE_REPLACED

Concerts cancelled in 2020 may have put a brief gap in Ling’s record with the Orchestra (a program every season since 1984-1985), but the ensemble’s former resident conductor more than made up for it Sunday with a performance both commanding and personal. END_OF_DOCUMENT_TOKEN_TO_BE_REPLACED