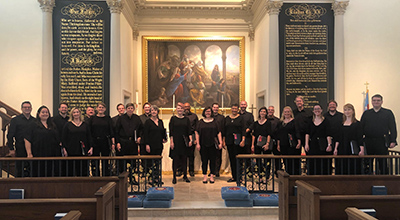 Contrapunctus Early Music, a vocal project launched in Cleveland by British countertenor David Acres, has been absent from the local musical scene for four years now.

The high-voice chorus of sopranos, altos, and countertenors will reanimate itself this weekend to join The King’s Counterpoint from Charleston, S.C. in a joint performance on Friday, March 25 at 7:30 pm at St. John’s Cathedral in downtown Cleveland.

In February 2018, before Contrapunctus’ last concert here, Acres told this publication that his involvement with King’s Counterpoint had kept him so busy that Cleveland had temporarily fallen off the calendar.

“A series of Baroque Messiahs and the inaugural concert in our exploration of Handel’s Oratorios, commencing with Judas Maccabaeus — both with members of the North Carolina Baroque Orchestra, a critically acclaimed performance in the Piccolo Spoleto Series and an invite to return, together with over 16 performances in South Carolina, have stopped us from returning to Cleveland to explore more high-voice repertoire with Contrapunctus.” END_OF_DOCUMENT_TOKEN_TO_BE_REPLACED

Imagine a concert that highlights underperformed music from an underexamined region and an underrated historical era. Not only does the program chart logical thematic paths through that repertoire, but it also changes up group configurations often enough to keep the audience attentive.

END_OF_DOCUMENT_TOKEN_TO_BE_REPLACED

On Friday, March 15 at 7:30 pm, Tom Trenney will bring his Detroit-based Sounding Light Chamber Choir (“the choir of many voices…one song”) to St. John’s Cathedral in downtown Cleveland for a performance on the Helen D. Schubert series of John Muehleisen’s Pietà, a 90-minute cantata inspired by the stories of three grieving mothers.

“The first story is about the Passion of Jesus Christ,” Trenny said in a telephone conversation. “The second is about the World War II soldier John Kipling and his mother Carrie, who communicated through letters and writings by father Rudyard. The third is based on the eulogy from Matthew Shepard’s funeral.

“Pietá is about the incredible sense of hope and light that emerges on the other side of tragedy. It’s a message of compassion — the opportunity we all have to sit with someone in grief, and help them experience the joy and grace that is present even in the most difficult moments of life.” END_OF_DOCUMENT_TOKEN_TO_BE_REPLACED 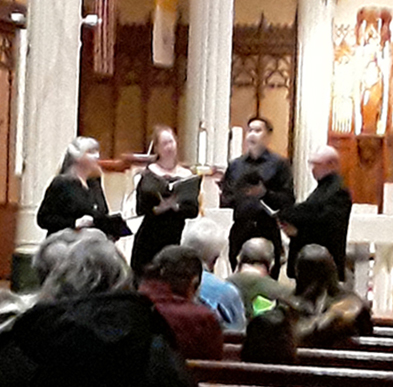 Mignarda, the longstanding soprano-lute duo of Donna Stewart and Ron Andrico, doubled its forces at St. John’s Cathedral on Sunday afternoon, February 24 for “Byrd songes,” a program of devotional and liturgical music by William Byrd. By adding José Gotera and Malina Rauschenfels to their roster, Mignarda created a splendid vocal quartet who sang revelatory versions of Byrd’s Mass for Four Voices and Ave verum corpus in the second half of the concert. END_OF_DOCUMENT_TOKEN_TO_BE_REPLACED 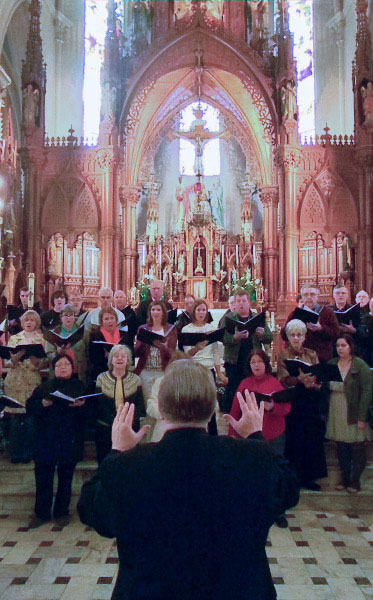 END_OF_DOCUMENT_TOKEN_TO_BE_REPLACED

As part of his prize for winning the 2018 American Guild of Organists’ National Young Artist Competition in Organ Performance, Aaron Tan won a period of professional representation by Karen MacFarlane Artists, Inc. That brought him to Cleveland’s Cathedral of St. John the Evangelist on Friday evening, February 8, for a cleverly conceived and finely wrought recital on its 1947 Holtkamp organ, an event co-sponsored by the Cathedral and the Cleveland Chapter of the AGO. END_OF_DOCUMENT_TOKEN_TO_BE_REPLACED

END_OF_DOCUMENT_TOKEN_TO_BE_REPLACED 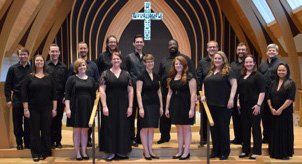 The Helen D. Schubert Concert Series at St. John’s Cathedral in downtown Cleveland has presented a number of fine European chamber choirs over the years, but this fall, music director Gregory Heislman is bringing in talent closer to home.

On Friday evening, November 10 at 7:30 pm, the Columbus-based Fior Angelico Chamber Chorus will present “Spanish Music for Lamentation and Rejoicing” under the direction of its founder, Matthew Bester.

END_OF_DOCUMENT_TOKEN_TO_BE_REPLACED 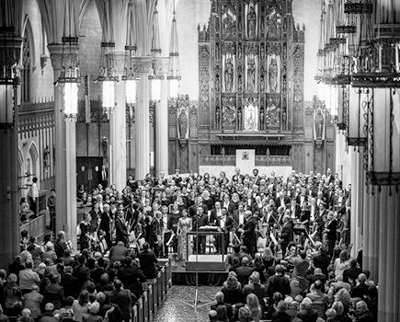 On Friday evening, October 17, a standing-room only crowd gathered in the sanctuary of Saint John’s Cathedral to hear the magnificent Cleveland Orchestra and Chorus under the direction of Franz Welser-Möst in a free concert that featured Bach’s Missa Brevis, BWV 232. END_OF_DOCUMENT_TOKEN_TO_BE_REPLACED 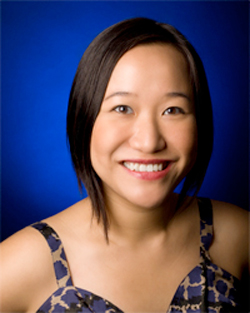 “Broken Consort” visits the Helen D. Schubert Concert Series at St. John’s Cathedral in Cleveland on Friday evening, March 8 at 7:30 for a concert of Iberian music of the thirteenth century as preserved in manuscripts in the northern Spanish city of Burgos.

First off, you may be wondering why this consort is “broken.” Nothing needs fixing — the term refers to an ensemble made up of different families of instruments rather than consorts of similar instruments like viols (a tradition that survives in the classical string quartet). But founder Emily Lau was inspired to form the group because she thought something definitely needed fixing in the way early music was performed. END_OF_DOCUMENT_TOKEN_TO_BE_REPLACED