On Friday, March 15 at 7:30 pm, Tom Trenney will bring his Detroit-based Sounding Light Chamber Choir (“the choir of many voices…one song”) to St. John’s Cathedral in downtown Cleveland for a performance on the Helen D. Schubert series of John Muehleisen’s Pietà, a 90-minute cantata inspired by the stories of three grieving mothers.

“The first story is about the Passion of Jesus Christ,” Trenny said in a telephone conversation. “The second is about the World War II soldier John Kipling and his mother Carrie, who communicated through letters and writings by father Rudyard. The third is based on the eulogy from Matthew Shepard’s funeral.

“Pietá is about the incredible sense of hope and light that emerges on the other side of tragedy. It’s a message of compassion — the opportunity we all have to sit with someone in grief, and help them experience the joy and grace that is present even in the most difficult moments of life.”

The work was originally commissioned for Pacific Arts Northwest. St. Olaf Choir director Anton Armstrong heard it in Austin, Texas at a “compassion festival,” and performed it with his choir. Trenney heard that performance. “The same afternoon, I wrote to Armstrong and asked, how do I get this piece?”

Trenney, a Painesville native and graduate of the Cleveland Institute of Music, founded Sounding Light in 2003 when he was working in the Detroit area. “It’s evolved over time, but originally it was an opportunity for me as a young conductor to learn to conduct more challenging music than I could with a church choir. It was also an opportunity to share music with a certain kind of message — hope and light. A purpose beyond just being a choir and being musical.”

Since taking a job at First-Plymouth Church in Lincoln, Nebraska, where he performed Pietà last Good Friday, Trenney has continued to make music with Sounding Light. “I come to Detroit for a week at a time two or three times a year,” he said. “We rehearse from Mondays through Thursdays and give three or four concerts over the weekend. Close to two-thirds of the singers come from metro Detroit and we sponsor homestays for the others.” 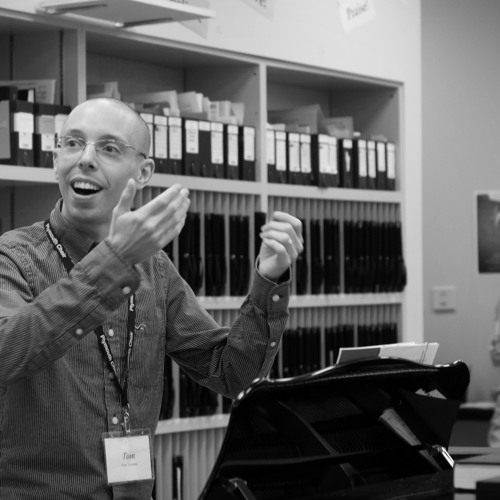 In Cleveland — as well as for three subsequent performances this weekend in Michigan — Sounding Light will be joined by the Stony Creek High School Choir, led by Brandon Ulrich. “I invited them to sing one of the concerts and they generously offered to do all of them,” Trenney said. “They’ll spend some time at the Cleveland Aquarium before heading back to Detroit.”

Two soloists with longtime connections with Sounding Light will be featured in Pietà. “Lindsay Kesselman sang for years when she and her husband Christopher Lees were in Ann Arbor. We’ve taken part in each other’s weddings. And Brian Giebler is a choir alum who studied at the University of Michigan and took his masters at Eastman where I met him. They’re both superstars.”

Trenney saw St. John’s Cathedral as the perfect venue for Pietà. “The choir sang there nearly ten years ago, and I remember the Pietà statue in the church. The spiritual dimensions of the space make it a wonderful venue, and (music director) Greg Heislman generously invited us back.”

The space is also especially conducive to the requirements of Muehleisen’s cantata, which is written for a main choir, a male chant choir, and a treble chorus. Trenney will locate the latter ensemble in the organ loft, and deploy his other forces in the crossing. “It’s scored for two acrobatic percussionists, two oboes doubling English  horn, and organ at the end in a closing hymn. That percussion is a logistical challenge — gathering it, moving it, and making it work in a live acoustic.”

Tom Trenney promises that Pietà will be enthralling for the audience. “It’s like one of those long books with 500 short chapters, or a movie that moves from scene to scene to scene, cutting in and out of three stories whose lines all come together in the end. It’s a thrilling experience.”

END_OF_DOCUMENT_TOKEN_TO_BE_REPLACED

Tower dedicated this surprisingly brief work to “women who take risks and are adventurous.” Adventurous to be sure. While the opening theme is a subtle echo of Copland’s, the CSO brass was remarkably bright, crisp and crackling in its relentless morphing of the motif into quick, layered variations, both delicate and discordant, robustly spiced with startling bursts of timpani. END_OF_DOCUMENT_TOKEN_TO_BE_REPLACED