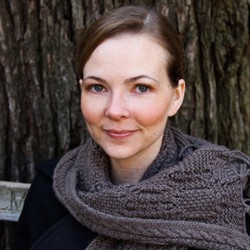 Last Friday morning, Canadian composer Tawnie Olson of the Hartt School of Music faculty in West Hartford, Connecticut — along with her four colleagues in the 2015 Iron Composer Competition at Baldwin Wallace Conservatory — accepted the challenge of writing an “instant” composition for recorders, celesta, and an overturned grand piano, to include this year’s “secret ingredient” of a board game. After five hours of creation and a brief rehearsal, Olson’s piece, called Subbeteo after the 1947 tabletop soccer game invented by Peter Adolph and published by Borras Plana SA, was declared the first prize winner during an evening concert in Gamble Auditorium.

Close behind were four other university faculty composers: Dorothy Hindman of the Frost School of Music at the University of Miami, who took second place as well as the vote-by-texting audience prize with her Lost Treasure; Rica Narimoto of Japan’s Kanazawa University with The Stones (third place); Ryan Keebaugh of Eastern Mennonite University with Ardent Shimmer (fourth place); and Kirsten Broberg of the University of North Texas with The Iconography of Nature. The evening’s jury consisted of Oberlin composition chair Stephen Hartke, Ideastream host Dee Perry, and performer-judge Kathryn Montoya, assistant professor of recorder and baroque oboe at Oberlin.

Because many of the ten board games the composers were offered as choices for secret ingredients were terra incognita except to collectors, it must have taken the intrepid composers a bit of time to figure out what they were all about before they could use them as a compositional element.

Broberg went for a 2013 Repos Production game by Alain Rivollet and Gaëtan Beaujannot called Concepts, which uses combinations of icons to allow players “to define a word or phrase.” These served as a springboard for her musical images of clouds, snow, rain, thunder, night, and an evening moon.

Narimoto chose an ancient one: Go, the 6th c. B.C.E. strategy game whose players place black and white stones on a grid to control territory — which provided her with the visual stimulus to create clusters of sound.

Hindman chose Lost Treasure, an electronic dive control center (1982 from Parker Brothers) that “helps treasure seekers find sunken chests of gold and silver,” and which provided the composer with some inspiring pings and beeps for musical manipulation. 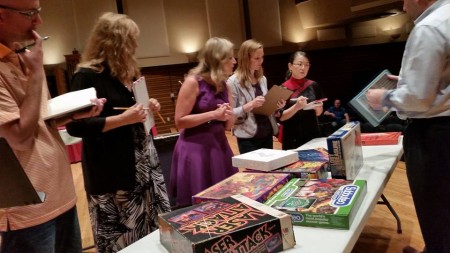 Keebaugh was intrigued by Mystery Mansion, a 1987 Milton Bradley game where players “build the board…as they look for a treasure chest hidden in a mansion,” a concept that led the composer to imagine some sonic thrills and chills during the hunt.

While all the composers made imaginative use of the secret ingredient, not everyone produced an entity that could really be called a finished piece, however short. Some examples were promising sketches that might have turned into something with a beginning, a middle, and an end, while others were mini-soundscapes without much formal shape.

Given the strangeness of the required orchestration, all five found some alluring sounds in the array of recorders wielded by Kathryn Montoya, the tinkling celesta played by Nicole Keller of the Baldwin Wallace Conservatory faculty, and the “sound icon,” a grand piano turned on its left side, a concept first imagined by Romanian composer Horatiu Radulescu in the 1970s, which added a variety of bowed (with nylon fishing line), struck, or plucked sounds in the hands of Iron Composer founder Joe Drew of Analog Arts. 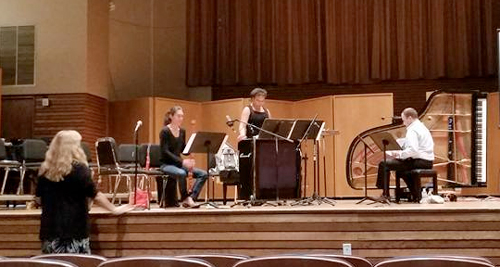 Broberg contrasted long notes from the recorders with a celesta pattern that gradually became more and more compressed. Narimoto created a tone row that arranged itself into refined clusters from the celesta, with only minimal utterings from the recorders.

Hindman’s underwater radar sounds led to shimmering, overlapping scales, using soprano, alto, and bass recorders murkily imitated by the celesta. Keebaugh used effective silences to represent the finding of empty treasure chests, and big clusters on the piano strings to underline the spookiness of the hunt.

Olson divided her piece into two equal halves — like a soccer game — and translated numbers into pitches and rhythms, writing in retrograde from the middle to the end, using fingernails on the piano strings to suggest the physical motions of playing the board game. Her efforts created a real, though tiny, piece of music. As first place winner, she took home a cash prize of $500 as well as a $500 commission from BlueWater Chamber Orchestra for a work to be premiered in the spring of 2016.

During a post-competition interview, a somewhat shocked yet extremely gracious Tawnie Olson complimented her fellow competitors. Olson confessed that she applied to Iron Composer because her compositional style is to write very slowly, with every musical gesture organized and reorganized.

“My goal in the competition was simply to finish the piece,” she said, adding that she had never written for any of these instruments. She was embarrassed to admit she had never heard of the “sound icon” before she had to write for it, although she had written for harpsichord, which put her into the groove of writing for celesta. She found that writing for the bassoon is far scarier than writing for the recorder. Still, all in all, the most difficult part of the competition was the need to write quickly. She looks forward to starting on her BlueWater commission — one of many she’ll have to finish over the next few months.

Those who would like to hear the results of Iron Composer 2015 for themselves can tune in to an edited version of the September 4 concert, emceed by Mark Satola, on WCLV Ideastream, 104.9 FM, to be aired on Sunday, September 13 at 3:00 a.m. and 8:00 p.m. and streamed on wclv.com.

END_OF_DOCUMENT_TOKEN_TO_BE_REPLACED

Rodgers & Hammerstein’s Cinderella was originally produced for television in 1957 — seven years after the animated Disney film was released — and starred Julie Andrews. According to the Rodgers & Hammerstein website, it was viewed by over 100 million people. END_OF_DOCUMENT_TOKEN_TO_BE_REPLACED

The story line has its origin in an 1855 play and an 1842 farce that Thornton Wilder mined for his 1938 play The Merchant of Yonkers. When that turned out to be a flop, in 1954 Wilder made the crucial decision to re-center the show around the character of the legendary marriage broker Dolly Gallagher Levi and renamed it The Matchmaker. END_OF_DOCUMENT_TOKEN_TO_BE_REPLACED

The Dodero Center for the Performing Arts at the Gilmore Academy in Gates Mills is one feature of an impressive campus. The auditorium is shallow, the stage is deep, and the ensemble played without a shell. Throughout the program, the sound, especially in instruments’ lower registers, tended to disappear. END_OF_DOCUMENT_TOKEN_TO_BE_REPLACED