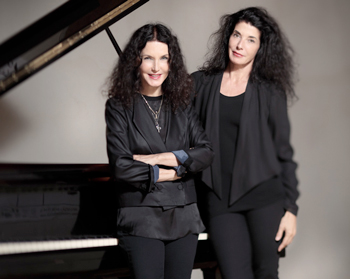 When the duo piano team of sisters Katia and Marielle Labèque return to Severance Hall this week, they will be bringing with them a rarity of the two-piano literature. “The Bruch is really the only Romantic concerto we have in our repertoire,” Katia Labèque said during an interview. “The Romantic composers didn’t write a lot for two pianos, so we are very happy to have this one. It is a wonderful piece and we look forward to bringing it to Cleveland.”

On Thursday, May 9 at 7:30 pm, guest conductor Semyon Bychkov will lead The Cleveland Orchestra in a concert that includes Bruch’s Concerto for Two Pianos, Detlev Glanert’s Distant Land: Music with Brahms, and Smetana’s Three Selections from Má Vlast: “Vyšehrad,” “The Moldau,” and “Sárka.”  The program will be repeated on Friday at 11:00 am (without the Glanert) and Saturday at 8:00 pm. Tickets are available online.

Interestingly enough, Bruch composed the concerto for the American duo-pianist sisters Rose and Ottilie Sutr in 1912. However, without the composer’s permission, the sisters rewrote the concerto to accommodate their technical abilities. “I think it was massacred by the sisters,” Labèque said. “Bruch was furious with them, and he forbade them to play the piece in Europe. So I think it is great to come back to America and present it the way that it was written.”

The whereabouts of Bruch’s score remained a mystery until Ottilie Sutr’s death in 1970. Then, in January of 1971 when some of her scores, manuscripts, and newspaper cuttings were sold at auction, the pianist Nathan Twining purchased a box of papers for $11 that contained Bruch’s autograph score. Although the orchestral parts had been purchased by other people at the same auction, Twining somehow managed to track them down and buy them back. He and pianist Martin Berkofsky set about reconstructing the concerto. “So it’s thanks to Mr. Twining that the concerto has a life,” Labèque said.

The Labèques discovered the concerto in the ‘80s and quickly added it to their repertoire. “When we heard about it, it sounded like an interesting piece — the inspiration for it was a piece that Bruch had written for organ. We play it from Bruch’s manuscript and it is very virtuosic. Learning it was a big challenge, but it’s wonderful music so it was worth spending all the time to give it birth again.”

The sisters began performing as a duo soon after graduating from the Paris Conservatory in 1968 and quickly achieved success with contemporary works by Olivier Messiaen, Pierre Boulez, and Luciano Berio. But it was their celebrated 1980 recording of Gershwin’s Rhapsody in Blue, which sold over half a million copies, that brought them international attention.

“We were first brought to America by Luciano Berio to play his concerto with the Los Angeles Philharmonic,” Katia Labèque said. “While we were there, people would ask, ‘Why don’t you play Gershwin?’ That was in 1979 and we did not know his music at all. So we said, ‘OK, let’s go to a record shop and buy some of his music.’ We did, and we bought quite a bit of jazz — some Miles Davis and Billie Holiday. We also bought the score to Gershwin’s two-piano version of the Rhapsody.”

After they returned to France, the sisters learned the piece and started to perform it. “People loved it, so we decided to record it. I think the fame came because it was a very different kind of music from what was being played in France at that time. Gershwin was not played at all. It was a little bit like what we have done now with Philip Glass — his music is fantastic, but it was not being played in France. In both cases the success came because of the beauty of the music.”

This week’s concerts are extra special for Marielle Labèque, who is married to Semyon Bychkov. “We are so lucky to play this concerto with him. He’s wonderful, and we’ve played it a lot, so we are ready for Cleveland.”

Katia and Marielle Labèque will also be featured in a Cleveland Orchestra Family Concert on Sunday, May 12 at 3:00 pm, when they will play Saint-Saëns’s Carnival of the Animals. That concert, under the direction of Vinay Parameswaran, will also include music by Rossini, Anderson, and Gershwin. Tickets are available online.