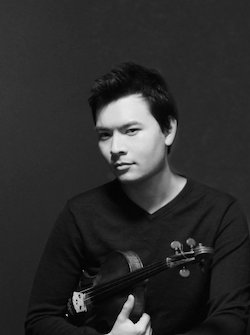 “I’m so excited about coming back to Cleveland,” violinist Stefan Jackiw said by phone from his home in New York. “I can’t wait to play the Britten with The Cleveland Orchestra in Severance Hall. It doesn’t get more luxurious than that.”

On Friday, November 25 at 7:30 pm, Jackiw will perform Benjamin Britten’s Violin Concerto with The Cleveland Orchestra under the direction of Thomas Søndergård. The concert also includes Stravinsky’s The Firebird (complete ballet). The program will be repeated on Saturday at 8:00 pm and Sunday at 3:00 pm. Tickets are available online.

I began our conversation by bringing up Jackiw’s last visit to Cleveland, in the summer of 2021 at Blossom, when he played Prokofiev’s Violin Concerto No. 2.

Mike Telin: This time you’re bringing the Britten, which is quite different from the Prokofiev.

Stefan Jackiw: Oddly there are some similarities. They are both Spanish-influenced. Prokofiev partially wrote the 2nd while he was living in Spain. And Britten was a pacifist and had strong feelings about the violence that happened during the Spanish Civil War and the looming WWII.

SJ: He did, and it’s a piece that is reflective of its time. It’s at times mournful and almost violently virtuosic. Sometimes hopeful, but guardedly so and sometimes whaling. And you hear its Spanish influences both in some of the rhythmic elements — there’s a moment that always reminds me of castanets — and there’s a seductive Spanish-tinged second theme in the Scherzo

This may be an oversimplification, but I think of the first movement as Spain before the war. You see dark clouds but there’s also a jaunty optimism or naive tenderness. The second movement is like in the heat of battle — incredibly antagonistic, dramatic, and dark. The movement ends with a huge cadenza. And like all cadenzas, it incorporates melodies and themes that we’ve heard so far in the piece. And here all these nightmarish obsessions come crashing together. There’s a lot of tension.

The last movement is a passacaglia — basically a theme and variations with a reoccurring bassline. What’s interesting to me is that the theme is presented in the trombones, and each time a new variation begins, Britten instructs that the tempo should pick up. So basically the same musical scaffolding gets faster and faster — it’s like a boulder rolling down the hill. And I think that also has a terrifying, inexorable quality. The piece ends with a teetering of — is there hope or just total desolation?

MT: It’s not programmed all that often.

SJ: I love the piece and you’re right, it’s not played that frequently, but certainly more than when I was a student. Many violinists have played and recorded it, but not like the Tchaikovsky. I hope it does get that same popularity because every time I play it, people talk about what a moving and powerful piece it is.

MT: Is it written idiomatically for the instrument?

SJ: I would not say that it lies well idiomatically, especially the middle movement. There are moments that are nearly unplayable. With some virtuosic music like Pagannini, the goal is for it to be tossed off with ease — it’s an opportunity for the performer to show the audience, ‘Look how I can conquer these feats.’ Whereas with the Britten, the difficulty in just spitting out the notes informs the dramatic content of it.

In the second movement Britten incorporates a variety of specialized techniques that he introduces bar after bar. He really uses a lot of the tricks in the violin toolkit, and doing that one after the other makes it difficult. But it shouldn’t sound like it’s being tossed off with panache. I think it needs that struggle.

MT: I see that you have played it with Thomas Søndergård.

SJ: We did it last month with the Royal Scottish National Orchestra in Glasgow and Edinburgh. That was my first time ever playing the piece. The pacing in the Passacaglia depends on the conductor and he did a beautiful job. He has a sensitive ear for colors which is very important in this piece, so it was a treat doing it with him.

MT: I’d like to switch topics to the trio.

SJ: Yes, the Junction Trio which is myself, the pianist Conrad Tao, and cellist Jay Campbell. It was always a dream of mine to be in a piano trio, and in 2015 I was paired with Jay on a chamber music tour in South Korea. We did, like, ten performances of Schubert’s Cello Quintet and I just fell in love with his playing and him as a person. He’s an incredibly smart and lovely person.

I said to Jay, “Let’s find a way back in the States to play together more.” He was onboard with the trio idea. It’s funny because at the time, neither of us had met Conrad, but we had heard a lot about him. So we sent him a message saying, “Do you want to get together and read some trios?” So we did.

I can’t believe we’ve been together for seven years. We’re a part-time group because we each have other things going on. But we are able to manage two big tours a year. We have a big December tour playing in New York, Boston, Philadelphia, San Francisco, and other places.

We’re premiering a new piece by Amy Williams on that tour, and John Zorn wrote a new work that we will premiere next season. We like playing a combination of old masterworks and pieces that are written today.

MT: And moving to another topic, I understand that you’ve recorded the Ives Sonatas with Jeremy Denk.

SJ: I have no idea when those will be released. They’re on a hard drive somewhere. We haven’t edited them — it’s just three days worth of raw material. But it will come out at some point. We tour the program — I wouldn’t say a lot, because there aren’t many places that want to book an evening of the complete Ives Violin Sonatas. But it is a great program.

When people think of Ives they think of thorny modernist music, which is true, but beneath all of that I think the sonatas are romantic with a capital R. The music is all about memory and nostalgia.

When we tour them, most of the time we collaborate with a vocal group who, before each sonata, will sing the hymns and folk tunes that Ives incorporated into the sonata so that the audience can have these tunes in their ear.

I learned all four at once, which was kind of an intense immersion into Ives. Before that I had only played his piano trio, which Junction Trio plays a lot. People should not be scared of Ives. It’s some of the most tender, beautiful music ever written. And Jeremy really brings out the humanity in it.

END_OF_DOCUMENT_TOKEN_TO_BE_REPLACED

Supported by engagingly, yet simple staging by Cara Consilvio, a well-prepared cast of singers told the archetypal story of Cinderella with charm and flair. Framing the production was  a sparse but colorful set and wonderful lighting by Dave Brooks. END_OF_DOCUMENT_TOKEN_TO_BE_REPLACED