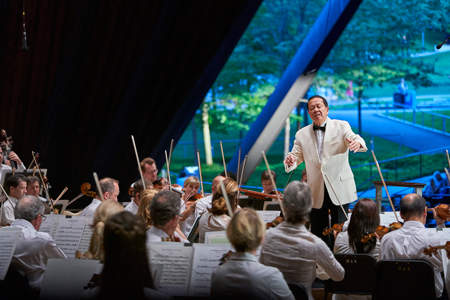 It was hot and humid on the evening of July 22, but that didn’t stop concertgoers from flocking to Blossom Music Center to hear the Kent/Blossom Chamber Orchestra and The Cleveland Orchestra.

Conducted by Charles Latshaw, the Kent/Blossom Chamber Orchestra opened the program with Ralph Vaughan Williams’ Running Set, a work crafted for a dance festival from four English and Irish folk songs. Latshaw’s precise motions and strong understanding of the work resulted in a well-structured performance. The short piece was marked by a strong wind section, with especially clean playing by flutist Megan Pan. However, the conductor could have inspired more energy and dynamic contrast to fully convey the excitement of the work.

Italian influences were prevalent throughout the evening. In Mendelssohn’s Symphony No. 4 “Italian,” the horns provided fine color, while the winds performed with precise intonation and sonorous playing. At times, the strings sounded underpowered, but when they did project, their playing was clear and crisp. Latshaw drew greater volume of sound from the strings in the third movement, leading to a more textured and nuanced performance here and during the concluding tarantella.

After the first intermission, Jahja Ling and The Cleveland Orchestra continued with Rossini’s “Overture” to The Barber of Seville. Ling’s energy translated easily to the Orchestra’s vivacious playing. Using dynamic contrasts skillfully, Ling and the ensemble gave shape and excitement to the work. The tight percussion section added depth without overpowering the rest of the Orchestra. Oboist Jeffrey Rathbun, hornist Michael Mayhew, bassoonist Barrick Stees, and clarinetist Dan McKelway played their solos with warmth and sweet, melodious tone. 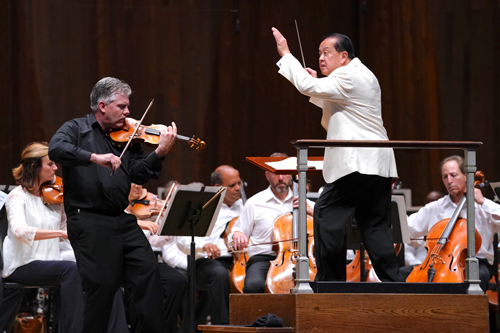 Eli Matthews, first assistant principal second violin, has waited a very long time to perform Paganini’s Violin Concerto No. 1 with the Orchestra, and he revelled in every moment he was on stage. Matthews gave a performance full of personality perfect for this flamboyantly virtuosic piece. With tasteful vibrato, whistling harmonics, and athletic deep-knee bends, the violinist showed off his expansive technique, capturing each mood change in dramatic fashion.

Matthews’ great energy and immense technical skill offered a refreshing, robust interpretation of Paganini, bringing much of the audience to its feet to roar with applause even after the first movement. The Adagio was marked by spooky, melancholic tones from the soloist, who played up its more tender parts with bold strokes. The violinist performed the third movement with great spirit and sense of fun — turning towards the audience with a impish grin as he struck the left-hand pizzicatos with gusto. Under the watchful eye of Ling, Matthews and the Orchestra might even have bested Paganini himself.

KBCO joined Ling and The Cleveland Orchestra for the Dvořák’s monumental New World Symphony, inspired by the idea of American music. Combining the sonic power of two orchestras added a special intensity to the work. Conducting from memory, Ling knew exactly where to draw out the most passion, emphasizing poignant sections with excellent phrasing.

The tender, fluttering strings and cooing winds punctuated by percussion resulted in a multifaceted first movement. Robert Walters played the second movement’s English horn solo with a wistful longing tone, like a lullaby. Ling kept it moving at a steady pace, and he and the ensemble maintained energy throughout the third movement Scherzo. The strings whirled the melody with fervor, and the tight wind section played each phrase tenderly — the flutes sounding especially lovely in the chirping trills. The horns were bold and triumphant in the thrilling Finale, and the trumpets and trombones rang out with clarity. Never allowing the movement to feel rushed, Ling and the Orchestra gave it excellent emotional depth and energy. The stylish performance ended in a well-deserved standing ovation. 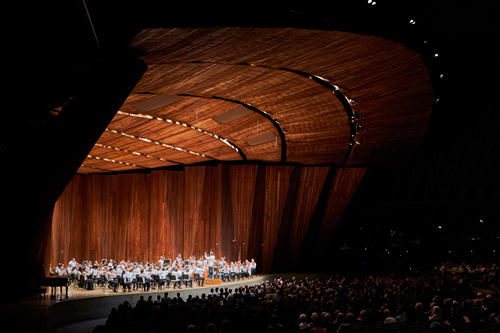 END_OF_DOCUMENT_TOKEN_TO_BE_REPLACED

Then, you heard all the qualities that make for a stunning soloist. Winner of the 2013 Cleveland International Piano Competition, Khristenko was back in town this month for a recital in Piano Cleveland’s summer series, Piano Days @CLE. And he couldn’t help but revel in the spotlight a little, even as he settled into a more collaborative role at the keyboard for his program, “Stanislav and Friends.” END_OF_DOCUMENT_TOKEN_TO_BE_REPLACED

Now, both pieces on Saturday might be called one thing, but they really sound like another. “Symphony” is a title that would fit Sergei Rachmaninoff’s Piano Concerto No. 2, as well as John Adams’ modern masterpiece for orchestra, Harmonielehre. END_OF_DOCUMENT_TOKEN_TO_BE_REPLACED

And the Orpheus effect has everything to do with who’s not onstage. The New York City-based group has rehearsed and performed without a conductor since its founding in 1972, and this means its members share the musical authority that typically rests with one person. Multiplied by a dozen or so, the interpretation of a piece suddenly emanates from every player, from the concertmaster to the double bass, resonating with a kind of collective power. END_OF_DOCUMENT_TOKEN_TO_BE_REPLACED