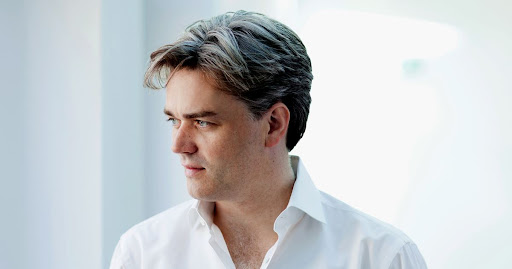 From his first moments on the podium, Edward Gardner seemed entirely at home in Severance Music Center. The English conductor made his debut with The Cleveland Orchestra the other Thursday, but you wouldn’t have known it from his ease with the ensemble and the general calm of the program.

Not that the performance on October 27 lacked drama. In fact, the evening’s repertoire had plenty of fervor, from the turbulence of Dvořák’s Symphony No. 7, to the passion of Robert Schumann’s Piano Concerto, to a contemporary work literally inspired by a storm.

But the musicians stayed in exquisite control of it all, and Gardner brought a level of comfort and command to each piece. They were instinctive collaborators, which meant many of the orchestra’s natural strengths — cohesion, restraint, and beauty of sound — could shine through.

That’s no small feat in a work like the Dvořák — a great symphony in the model of Brahms and Beethoven, one that pares music down to its essential elements and, as a result, leaves little room for error. In fact, two of the best recordings of this piece were made in Cleveland under the exacting standards of past music directors: George Szell in 1960 and Christoph von Dohnányi in 1985.

Gardner put in his own bid Thursday, leading a polished and powerful performance from memory. He set the agitation of the first movement, Allegro maestoso, in motion and stayed in supreme control to the work’s end, slowing down sections of the Finale to arrive at a broad and stirring conclusion. Along the way, the Orchestra made serious divertissements out of the piece’s inner movements, from the dramatic arc of the Poco adagio to the fiery dance of the Scherzo. It was passionate music, expertly played.

Technique allows for expression, and this was also the guiding principle behind the program’s first half. Pianist Kirill Gerstein gave a note-perfect performance of the Schumann Concerto that also managed to explore the work’s full range of artistic possibilities. He emphasized precision in the opening Allegro, with every phrase thought out and very little blurring from the pedal, crafting not so much a fantasy in the composer’s Romantic style as a symphonic movement of intricate construction.

Hints of personality were present in the back-and-forth phrases of the Intermezzo, which put piano and orchestra in a sensitive dialogue with one another. And by the final Allegro vivace, Gerstein’s extroversion had broken through, making for a dazzling movement of controlled pyrotechnics. He kept the virtuosity going in his encore, Chopin’s Waltz in A-Flat, Op. 42.

Some of the Orchestra’s most impressive playing came at the concert’s start. George Benjamin’s Ringed by the Flat Horizon evokes an unsettling atmosphere — a thunderstorm, specifically — and the challenge here for the musicians is conjuring that tension while still staying calm. More than anything, the piece is a tuning nightmare, asking instrumentalists to sustain extreme dissonances at one moment and then play in perfect unison the next. Gardner and the Orchestra made it sound easy, like they had done this many times before.

END_OF_DOCUMENT_TOKEN_TO_BE_REPLACED

The strings-only work by Berg has made relatively frequent appearances on the Orchestra’s programs. In 2021, the musicians recorded it for the In Focus series, and it appeared again on last year’s European tour. Friday’s rendition maintained the group’s characteristic light and effortless playing, each section blending as much as possible to echo the work’s original form as a string quartet. At fifteen minutes total, the piece is quite short, but the dense encoded musical meanings require some extra-attentive listening. Splitting up the three movements ensured that each one could be appreciated on its own. END_OF_DOCUMENT_TOKEN_TO_BE_REPLACED