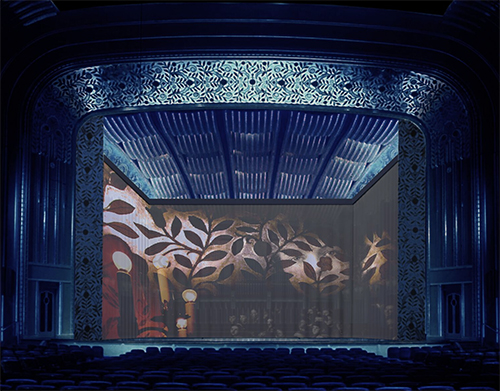 In the words of Irving Berlin, “There’s No Business Like Show Business.” While that song is a subtly sarcastic tribute to an alluring life in the theater, it’s spirit is also the premise for Richard Strauss’ 1916 opera Ariadne auf Naxos which will receive three performances at Severance Hall beginning this weekend.

Cleveland Orchestra Music Director Franz Welser-Möst says in a video that Ariadne is “an opera about a young composer writing an opera, and the rich man who commissioned him decides that this hot blooded young man who is just writing a tragic, profound opera, should write a comedy as well.”

Director Frederic Wake-Walker describes it as “an opera about opera. The highs and lows, the artistic dreams, and the harsh realities. It’s about a theater full of egos and eccentrics. Divine divas and clumsy clowns. Backstage intrigue and last minute rehearsals. Yet ultimately it’s about how opera is able to transcend politics and practicalities and transport us to the land of the Gods.” Click here to listen to more from Wake-Walker as well as insights from Video Content Designer Dominic Robertson.

In more immortal words of Irving Berlin, “Let’s get on with the show.” The three performances of this made-for-Cleveland production will take place on Sunday, January 13 at 4:00 pm, Thursday the 17th at 7:30 pm and Saturday the 19th at 8:00 pm. The cast includes soprano Tamara Wilson (Ariadne/Diva), tenor Andreas Schager (Bacchus/Tenor), soprano Daniela Fally (Zerbinetta), and mezzo-soprano Kate Lindsey (Composer). The Opera will be sung in German with English supertitles. Read a synopsis here. Tickets can be ordered here.

“For me, this opera is a lot more fun than most that I perform,” American soprano Tamara Wilson — who will perform the title role — said during a telephone conversation. “First of all, I get to live and I think that only happens in one in ten operas I perform.” Wilson said that she is also likes the fact that it is divided into two distinct parts. “It is a show within a show, so it feels like one of those old Hollywood movies where you have a musical being prepared and then everyone performs it in the end.”

When asked to describe her character, the soprano said that during the prologue she’s your typical diva, but during the opera itself, she is the embodiment of all operatic heroines. “There are moments that are light hearted, and some that are exceedingly tragic. That’s what Strauss does so well. In the beginning, he describes how opera is made and all the crazy stuff that goes along with that. But at the end, all that insanity pays off. It’s what people go to the opera for — situations that are larger than life to let you escape from your own. And Ariadne’s music is so beautiful and transcendent at the end, so you feel that emotion that you can only get when you go to live theater.”

Wilson, who is well known for her interpretations of Verdi heroines, noted that because Strauss’ music is so singable, it is easy to get it into her ear. “This kind of Strauss is like a prelude to movie scores, at least it for me. And technically speaking, I sing it that same as I would anything, but here you have long, long lines that are all very lyric and fluid. And the text painting that Strauss does is so incredible.” And, when asked about her love interest, Bacchus, she exclaimed, “Andreas is amazing! You don’t hear many tenors like him.”

As with previous made-for-Cleveland productions, this one will also incorporate Severance Hall’s architecture. “The opera is set in the time-period that Severance was built,” Wilson said. “Everything is from that silent movie era. The burlesque troupe is the Marx Brothers, so instead of opera buffa versus opera seria, it’s more about high classical art versus the popular art at that time.”

Why does Wilson think people should go to this Opera? “When I first heard it, it was the first time that I teared up at the end of any opera I had listened to, and that is not an exaggeration. The music is so gorgeous that it hits your soul in a way that other operas don’t. But the reason this opera works is because it’s also fun. It harkens back to Mozart titles like Figaro where you have a lot of comedy but at the heart of it there’s this pure life story. The characters are all human — they’re all like us — and their problems are exactly what we deal with today, even though it was centuries ago. And I can’t wait to hear the music played by this orchestra. It’s going to be amazing.” 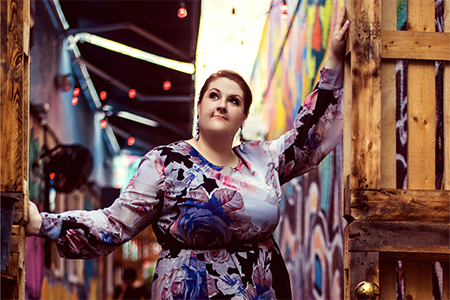 Growing up in Naperville, Ill., Wilson said that music was always present in their house. Her mother performed in musical theater, and Wilson jokingly said that her first performance was in utero. “My mom was singing in Once Upon a Mattress, so I think it was ingrained in me really early. I would sit near the piano when she played and I’d make up my own musicals in the basement and dance around with my Barbies.”

Wilson joined the choir in fourth grade and played flute in band. Then, while in middle school she was told that she had to choose between band or choir. “My parents are thrifty and since we had paid for the flute, I was going to stay in band. But when I told my choir teacher, she said ‘no, you are not quitting choir.’ So she kind of determined my path for me.”

The young singer began studying voice during her junior year of high school, which aside from choral music was her first taste of solo classical singing. “My first songs were by Henry Purcell and I just fell in love with them.” She also attended Oberlin’s Summer Vocal Program. “They told me that if I auditioned there I would get in and I thought, awesome.” Wilson eventually made the decision to attend the University of Cincinnati-College Conservatory which she said ended up being a good fit for her.

After graduating, a career as an opera singer was not part of Wilson’s agenda. “I was planning on being a teacher, because I didn’t do any opera in school — except in a rehearsal room for a fellow student’s doctoral degree — so I thought it was not meant to be. I love teaching, so I’d do that.” Then, in 2004 Wilson entered the Metropolitan Opera National Council Auditions on a whim. “From then on my fate was sealed.” 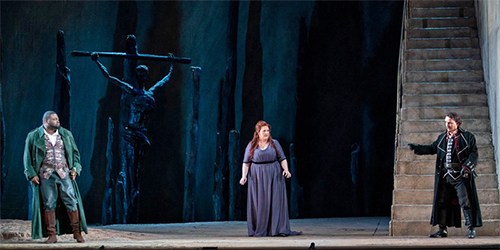 For more than a decade Wilson has performed leading soprano roles on the world’s greatest stages. In addition to her Cleveland performances, she will perform the title role in Ariadne auf Naxos at Teatro alla Scala later this season. She will also return to the Metropolitan Opera as the title role in Aïda, the role of Leonora in Il Trovatore at Lyric Opera of Chicago, Desdemona in Otello at the Canadian Opera Company, and Chrysothemis in Elektra at Opernhaus Zurich.

Although Wilson enjoys traveling, she said that it took some time to understand that it was part of the job. “When I first started I had that, ‘Oh my gosh, I’m going to shiny new places and isn’t that cool.’ But then you get into the real life version of what this job means — you visit all these cities but you are working and need to be dedicated to the job — it’s not a vacation. Getting used to that was kind of annoying.”

On the rare occasion that she is home for any length of time, Wilson enjoys cooking — as is evident by looking at her Instagram account. “My family have always been big cooks. My Dad’s half of the family is French. We still have cousins who live there and one of them runs a food festival in Rouen, so cooking is in our blood. At home we make a lot of French dishes, and on my Mom’s side, a lot of German dishes.

END_OF_DOCUMENT_TOKEN_TO_BE_REPLACED

Rodgers & Hammerstein’s Cinderella was originally produced for television in 1957 — seven years after the animated Disney film was released — and starred Julie Andrews. According to the Rodgers & Hammerstein website, it was viewed by over 100 million people. END_OF_DOCUMENT_TOKEN_TO_BE_REPLACED

The story line has its origin in an 1855 play and an 1842 farce that Thornton Wilder mined for his 1938 play The Merchant of Yonkers. When that turned out to be a flop, in 1954 Wilder made the crucial decision to re-center the show around the character of the legendary marriage broker Dolly Gallagher Levi and renamed it The Matchmaker. END_OF_DOCUMENT_TOKEN_TO_BE_REPLACED

The Dodero Center for the Performing Arts at the Gilmore Academy in Gates Mills is one feature of an impressive campus. The auditorium is shallow, the stage is deep, and the ensemble played without a shell. Throughout the program, the sound, especially in instruments’ lower registers, tended to disappear. END_OF_DOCUMENT_TOKEN_TO_BE_REPLACED