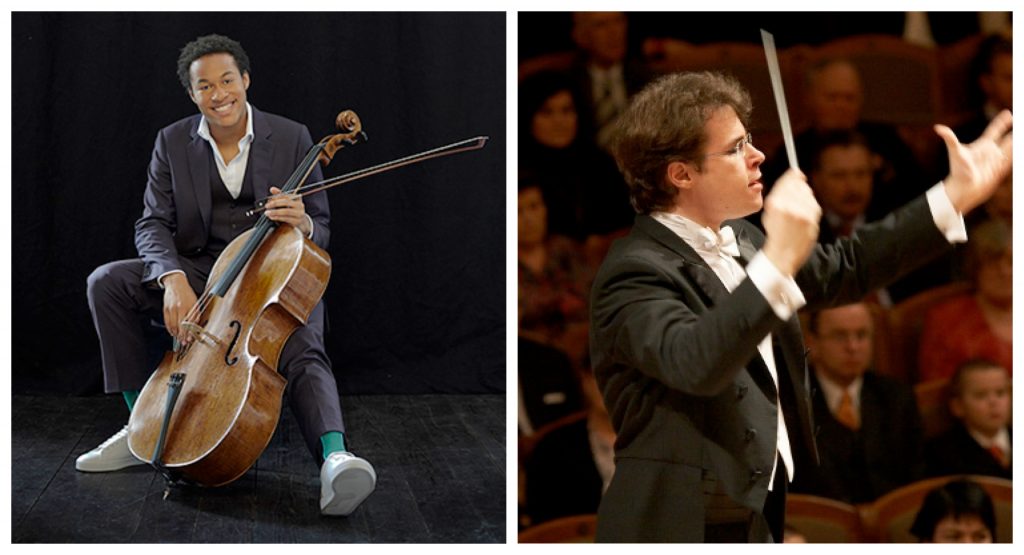 On Thursday, November 4 at 7:30 pm The Cleveland Orchestra will welcome the return of guest conductor Jakub Hrůša and welcome cellist Sheku Kanneh-Mason to the Mandel Concert Hall stage for the first time.

The program features Samuel Coleridge-Taylor’s Ballade in a, Elgar’s Cello Concerto and Dvořák’s Symphony No. 6. The program is repeated on Friday at 7:30 pm, Saturday at 8:00 pm, and Sunday at 3:00 pm. Tickets are available online.

We caught up with Jakub Hrůša at his hotel and began our conversation by asking him what it’s like to be able to return to the States? Our conversation with Sheku Kanneh-Mason is below.

Jakub Hrůša: This is the first time I’ve flown overseas since the beginning of the pandemic and I’m very happy that it was to Cleveland — it’s a very special feeling. Because of the history of my visits — for a while I was coming almost every year  — I think of Cleveland as my American home. It’s great that after this pandemic pause the first people I see are these musicians. And that feeling connects to the public as well, so I’m very happy that after that period of absence I can be here again.

Mike Telin: What are your thoughts on the Elgar Concerto?

JH: By pure coincidence I have conducted it a lot. I’m always curious what the cellist will discover in it. I’ve done it with Truls Mørk, Johannes Moser, Sol Gabetta, and Alisa Weilerstein, and they were all very different. So I’m interested to see what Sheku will do with it.

It’s not a symphonic concerto like the Dvořák, which could be described as a symphony with solo cello. But you still need an orchestra that accompanies really well, and this is the case with The Cleveland Orchestra. So I’m excited to rediscover the piece with my friends here.

MT: How well do you know the music of Samuel Coleridge-Taylor?

JH: An honest answer — not at all. It was The Cleveland Orchestra who asked if I would consider doing the Ballade. I enjoy discovering music and it’s unpredictable how you come to know some pieces.

It’s one thing is to be a guardian of war horses — we need the things that we love. I’m also fond of contemporary works where you create something new. But I have a fondness for this third category, which is discovering music by composers from older times that is not played very often. The thing is that you need to discover things that are worth it, and not things that were forgotten for good reasons. But when I looked at the Ballade, I thought that it is a good piece of music, it’s well constructed and honest. So I said yes, why not. I even proposed it — with the permission of Cleveland — for my concert next week with the Chicago Symphony. Cleveland agreed and Chicago agreed, so I’ll be doing it for two weeks in a row.

MT: And your thoughts on Dvořák No. 6.

JH: Of course no one needs to discover  Dvořák, everyone knows his music, but still it’s a symphony that is not played as much as Nos. 7, 8, and 9

MT: I think the scherzo is just a great piece of music.

JH: I’m hesitant to say that one thing is greater than another but it’s true that the scherzo sticks out in the best sense as something that is extraordinarily convincing. It’s like a slavonic dance used in a symphony.

I have conducted the symphony a lot — you should see my score — it’s a pocket score from 1957 and it’s totally worn out. I had to actually give it to the librarian of the Orchestra to fix it because the pages are flying out.

Maybe it is a little less original, yet the outer movemnts remind us of some other composers — good ones. I think there’s a lot of Beethoven in the sense that you hear a bit of Egmont and  Eroica. Dvořák learned from the best and he was not ashamed to use some weapons from the old masters.

The piece has a beautiful compositional form and yet it’s a pleasing one. No. 7 is more dramatic, but No. 6 is more comforting. It has a great positive radiance to it. It has a beautiful finale which raises people from their seats, but this is what we need these days. When people come to live concerts they want a good energy and vibe which we couldn’t have during the pandemic. 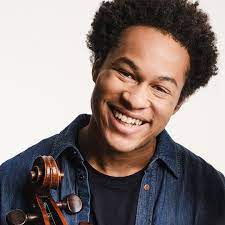 Many people may know the gifted cellist Sheku Kanneh-Mason for his performance during the wedding of Prince Harry and Meghan Markle. However, he is the real deal.

We caught up with him at his hotel and began our conversation by asking him to share his thoughts on the Elgar Concerto.

Sheku Kanneh-Mason: It’s an amazing piece of music and so perfectly crafted. It has all of these wonderful outbursts and climaxes, and big dramatic moments. But what makes it special are the intimate chamber music moments. Those parts that are internal, personal, that’s what I think makes the piece great.

Mike Telin: You have cited Jacqueline du Pré as a musical hero — do you find it difficult to have her ghost hanging over when you play this concerto?

SKM: No, it’s incredibly inspiring. What’s great about her playing is how personal and genuine and passionately she plays. So she’s more of an inspiration than something intimidating when it comes to approaching the piece.

MT: I find it fascinating how differently everyone plays it.

SKM: Elgar’s writing is incredibly detailed, but sometimes that detail is in the harmony and the subtle changes of expression, and I think that’s where the personal differences come from.

MT: How does it feel to be making your Cleveland Orchestra debut?

SKM: I’m very excited. I’ve heard so many great things about the orchestra. I think this concerto has wonderful chamber music moments which will be exciting to do with them. 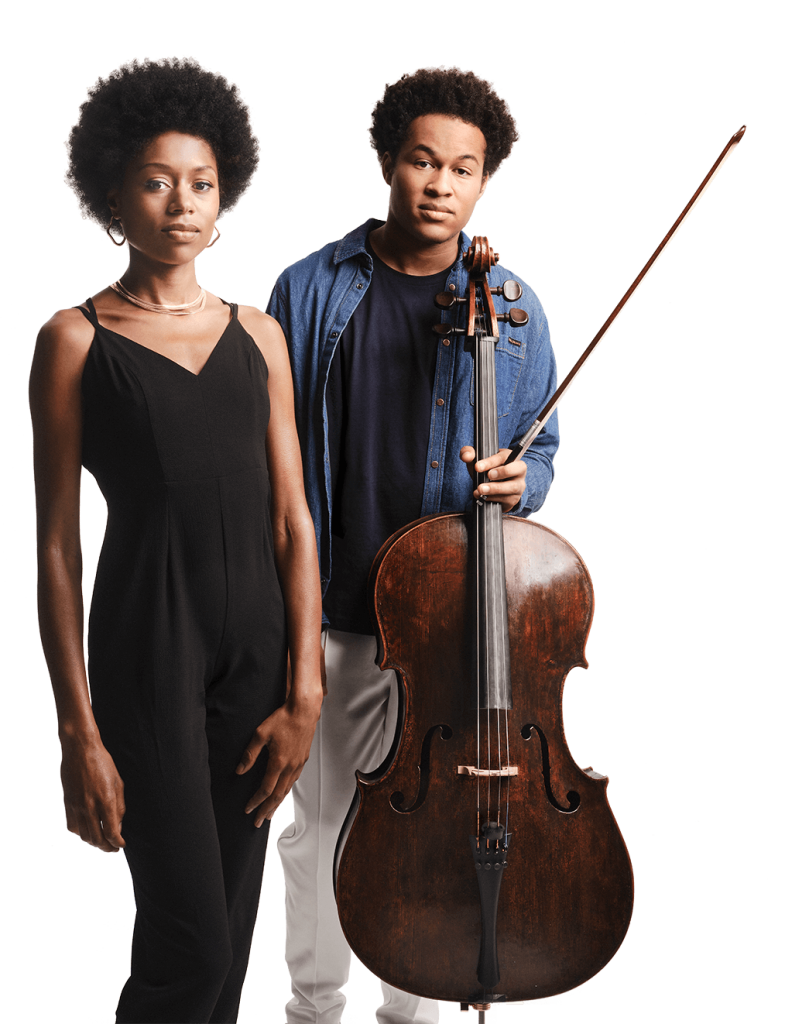 MT: Your siblings are all accomplished musicians as well.

SKM: Playing together was something we certainly did when we were very young.

MT: You have a new recording on Decca coming out this week.

SKM: My sister Isata and I have played all of the cello and piano repertoire together, so making this recording with her was something very nice.

MT: You were a member of the Chineke! Orchestra. How did that experience help you grow as a musician and as a person?

SKM: It was incredibly inspiring to be part of the first concert I did with the orchestra. I remember playing Beethoven 7. It was my first time playing in a professional orchestra and it was inspiring to be around musicians who had similar backgrounds and looked like me. That had such an impact on my confidence. It really is a family of wonderful musicians who are able to share stories and support each other.

MT: During the lockdown you did some live stream concerts.

SKM: We had a full house in Nottingham, so we did a FaceBook Live concert twice a week. It was something to work towards — to have an audience to play for. But yeah, it was just fun for us. And for the audience as well because it was a tricky time for them.

Jackson began the program with a recitation of Langston Hughes’ poem “Helen Keller” — the first of five poems by Hughes that served as interludes between each piece on the first half. END_OF_DOCUMENT_TOKEN_TO_BE_REPLACED

Pianos with pins and tape on strings, a bass drum and tam tam, crotales, Almglocken, and vibes. Microphones were hooked up all around the instruments. The feed was sent to speakers around the room. Lighting designer Nicholas Houfek hung incandescent globes over the arrangement of instruments from thin black wires stretching across the beams. END_OF_DOCUMENT_TOKEN_TO_BE_REPLACED

From the podium, Elim Chan set an ambitious tone for the evening. The rising star conductor, here in her Cleveland Orchestra debut, has a commanding style, and every twist and turn in Saturday’s performance tracked closely with her baton. END_OF_DOCUMENT_TOKEN_TO_BE_REPLACED