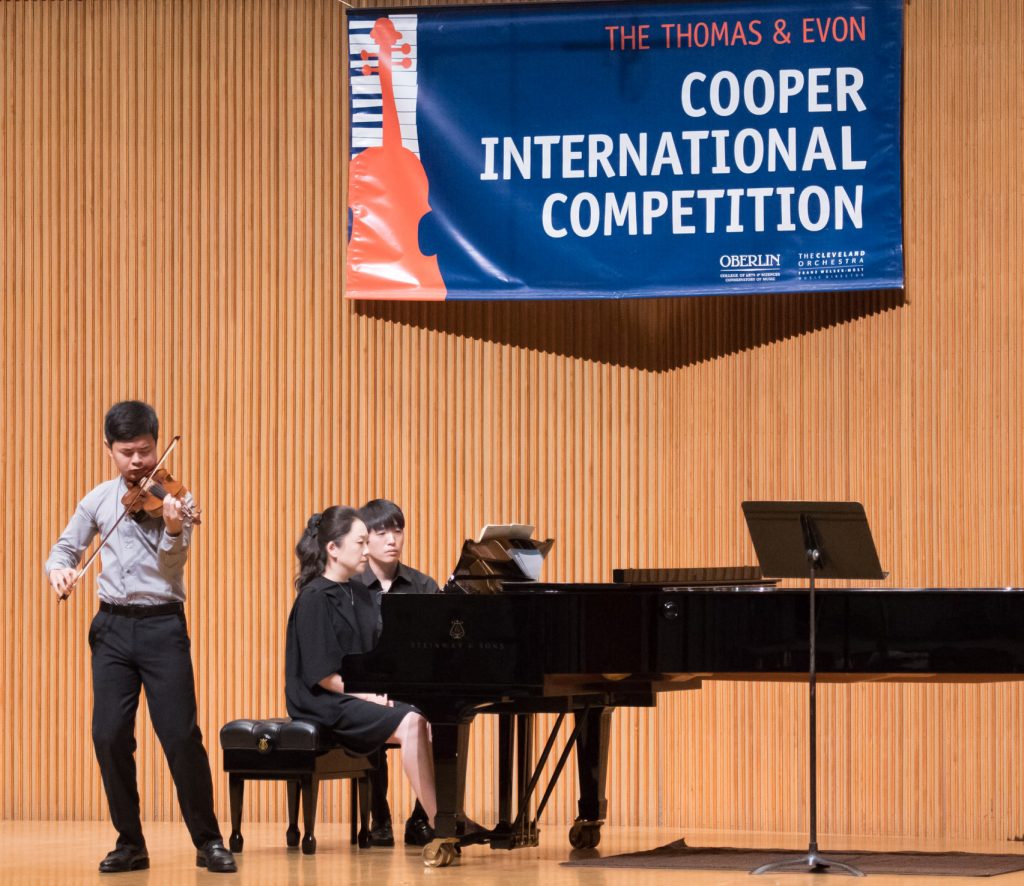 Since 2010 the Thomas and Evon Cooper International Competition has brought talented young violinists and pianists to the campus of Oberlin College and Conservatory every summer.

After a two-year hiatus due to the pandemic, the Competition will return beginning on August 15. The 2022 edition for violin will feature a revised format and the largest prize package in the competition’s history.

The competition includes a week of performances in Oberlin’s Warner Concert Hall. To kick things off, all eighteen participants will give 30-minute recitals with piano on August 15 and 16. The field narrows to six violinists on August 17, when each musician will perform a 45-minute program, again with piano. The Concerto Final features three violinists performing full concertos on Friday, August 19. An Honors Recital on August 18 features outstanding performances selected from the first three days of competition. All rounds are free and will be streamed live on oberlin.edu and The Violin Channel. Click here for a complete schedule.

“We’re excited about the changes and the new additions,” competition director and jury chair Sibbi Bernhardsson said by telephone.

“We wanted the experience to be as positive and educational as possible, and for the winners we wanted to give them more than just the cash prize and the ability to put first prize on their resumé. We wanted to provide them with such benefits as mentoring from a management company and I’m very pleased that it all fell into place.”

The eighteen finalists were selected through a recorded screening process and represent the countries of Hungary, South Korea, and Canada, as well as the United States — four from Illinois, two each from Maryland and New York, and single competitors from Alabama, Arizona, California, Louisiana, New Jersey, Ohio, and Virginia.

Bernhardsson, who also serves on the Oberlin Conservatory faculty, noted that in addition to the $20,000 cash prize, this year’s winner will receive a two-year partnership with MKI Artists.

“John Zion, who is the managing director of  MKI Artists, is an old friend and was the manager of the Pacifica Quartet when I was in it, so I was in touch with him almost every day during that time. And when I was asked to head the Competition, I started to think of ways to find opportunities for the winners, and I was talking to John about how so many young professionals are just thrust into the professional world. He’s always looking for talent to represent so we came up with this idea that he would partner with the Competition and mentor the first prize winner about the business. He will also book ten performance dates for them, which is really exciting.”

Zion will also serve on the jury for the final round. “This makes sense because he will be working with the winner —  but he will have just one vote like everyone else.”

Another new prize is that the winner will receive a new work for violin and orchestra by composer Jeff Scott as well as the exclusive rights to its world premiere and two years of performances.

“Jeff’s a great composer — I just played a piece by him for violin and piano and was struck by how attractive it is and how well he writes for the violin,” Bernhardsson said. “The working relationship between Joseph Joachim and Brahms is so well documented that we were thinking that it would be great for the young winner to have the opportunity to  premiere a short work by a well-known living composer and have exclusive performance rights for two years — of course it’s a dream for a composer to know the piece will be guaranteed multiple performances.”

The prize package also includes the use of a rare Italian violin loaned by Jonathan Solars Fine Violins of New York.

This year’s repertoire requirements will be slightly different. During the first round contestants must include the fugue movement from one of Bach’s unaccompanied violin sonatas, No. 1 in g, No. 2 in a, or No. 3 in C, as well as a Paganini Caprice and a five-minute encore piece with piano written or arranged by Fritz Kreisler. “We will also make a twelve minute reduction of the concerto the participant  has chosen and they won’t know what that is until the day before the first round.”

And new to the recital round: all contestants will be required to perform Jessie Montgomery’s Rhapsody No. 1. “Not only is it a beautiful work, it’s also the perfect competition piece. It has so many virtuoso elements, but there is also a lot that the performer has to decide how to bring to life and there are so many ways to do that so it will be very telling to hear how these young musicians approach that,”  Bernhardsson said. Click here to see the complete repertoire requirements.

Perhaps the biggest format change is that the three finalists will play their concertos with the Canton Symphony under the direction of Gerhardt Zimmermann in Warner Concert Hall.

While there is no better orchestra than Cleveland, Bernhardsson said there were many practical reasons behind the change, including the dates and the desire to keep the competition in one geographic place, and of course the economics of putting on the competition.

“Canton is a great orchestra and I love Gerhardt Zimmermann. They also agreed to engage the winner — often in a competition you get to play the finals with an orchestra but there is no guarantee that you will be engaged by that orchestra. We’re excited about the collaboration and hopefully the Canton Symphony will be happy working with us.”

This year every participant will also have their transportation, accommodations, and meals paid for by the competition. “We think that if you’re good enough to get in you should be able to come no matter what your financial situation.

“We are excited about this competition,” Bernhardsson said. “The artistic level has always been very high, but I can say that this time it is even higher.”

Franz Schmidt’s Symphony No. 4 showcased the ensemble, under guest conductor Jonathan Berman, in the standard conventions of a not-so-standard piece. But at the start of the program, the musicians were equal partners to pianist Cédric Tiberghien, whose playing could be as bold as the full orchestra or as intimate as any instrumental solo. END_OF_DOCUMENT_TOKEN_TO_BE_REPLACED

END_OF_DOCUMENT_TOKEN_TO_BE_REPLACED

Jackson began the program with a recitation of Langston Hughes’ poem “Helen Keller” — the first of five poems by Hughes that served as interludes between each piece on the first half. END_OF_DOCUMENT_TOKEN_TO_BE_REPLACED

Pianos with pins and tape on strings, a bass drum and tam tam, crotales, Almglocken, and vibes. Microphones were hooked up all around the instruments. The feed was sent to speakers around the room. Lighting designer Nicholas Houfek hung incandescent globes over the arrangement of instruments from thin black wires stretching across the beams. END_OF_DOCUMENT_TOKEN_TO_BE_REPLACED

From the podium, Elim Chan set an ambitious tone for the evening. The rising star conductor, here in her Cleveland Orchestra debut, has a commanding style, and every twist and turn in Saturday’s performance tracked closely with her baton. END_OF_DOCUMENT_TOKEN_TO_BE_REPLACED