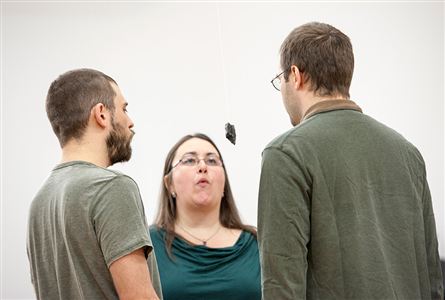 What promised to have all the elements of a wacky gallery happening — three musicians blowing, whistling, and breathing onto an ancient, suspended rock — became a surprisingly engaging experience last Friday in Gallery 218 of the Cleveland Museum of Art.

The performers: three members of Philadelphia’s new music choir, The Crossing. The piece: David Lang’s Lifespan. The rock: a tiny, craggy, 4-billion-year-old object from an archeological dig in Alberta.

At 4:00 pm sharp, soprano Rebecca Siler, tenor Steven Bradshaw, and bass Colin Dill walked into the Glass Box gallery that normally houses sculpture, surrounded the rock dangling from the ceiling, and for the next thirteen minutes addressed it with a vast array of vocalizations. The piece starts with subtle wind noises, then staccato whistles, then real whistling — solo, duo, and trio — first in wide intervals, then moving closer together in pitch and increasing in intensity.

Fierce puffs of air morph into hissings resembling angry cats. Sotto voce twittering and solo single-note whistles gather into a cadenza of birdlike songs, then circle around a single pitch. Overblown whistles abandon pitch in favor of air compressor-like sizzles, then closed-mouth huffing. During all of this, the musicians slowly circle the rock, continually advancing and retreating, subtly moving it with their breath. Finally, they leave the gallery one by one. The audience, standing or sitting around the perimeter of the space, remained in rapt (or perhaps stunned) silence until someone finally cued applause.

Originally commissioned by artists Jennifer Allora and Guillermo Calzadilla for a retrospective of their work in Philadelphia in 2014, Lifespan might seem like the type of piece that could have been improvised on the spot. Not so. The Crossing’s artistic director Donald Nally showed images of Lang’s score on his phone to some of the attendees after the performance. The work is arranged in cells, each of which advances to the next at the cue of the leader — a role that rotates among the three singers from performance to performance. And it turns out that the trio had already performed the work more than three hundred times, with fifteen more to come during their three-day residency at the Museum last weekend.

Describing his vision of the work, Lang wrote, “I imagined that the musicians would use their breath and their voices to challenge and threaten the suspended rock, in the way that the forces of nature have been challenging it for the previous four billion years.”

Whether as a witness you took that narrative to heart or imagined something else happening during the performance, the experience was engrossing. Performing Lang’s directions with total commitment and impressive oral virtuosity, Siler, Bradshaw, and Dill quickly drew the onlookers into the performance, and held them in thrall even after they had left the space.

Curious to hear the piece again, we came back for the 5:00 performance. A different leader inspired slightly different pacing and a bit more intensity than the hour before. That’s what makes live performances so fascinating.