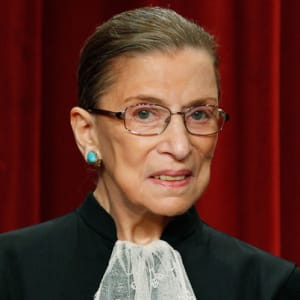 Justice Ruth Bader Ginsburg is an unlikely folk hero. Her law career has spanned six decades, with more than 25 years on the Supreme Court. Now 86, she has written a notable series of blistering dissents. This has endeared her to a younger generation on her side of the political fence, and earned her an unexpected nickname: Notorious RBG.

As her legacy is being explored in film — both a documentary and a drama in 2018 — this well-known opera lover is now also celebrated in music. On Thursday, April 18, Cleveland State University faculty pianist Angelin Chang and friends brought the excellent “Notorious RBG in Song” to CSU’s Drinko Recital Hall. Anchored by the formidable soprano and composer Patrice Michaels, this heartwarming evening was an emotionally powerful, wonderfully researched biodrama in honor of RBG’s life and work.

The program was focused around Michaels’ neotonal, nine-song cycle The Long View, and also included three songs by Lori Laitman, Lee Hoiby, and John Musto, and two commissioned for the Justice’s 80th birthday by Stacy Garrop and Vivian Fung. These songs were connected with well-wrought historical and biographical storytelling from Michaels with occasional underscoring by Chang. Yee Eun Nam’s beautiful and elegant projections amplified the story with purple and pink abstract watercolors and archival photos and documents. A short appearance by Lee Fisher, Dean of the Cleveland-Marshall College of Law, underlined the gravitas of Ginsburg’s sung dissents.

Michaels sang gorgeously with excellent diction and clear ownership of the stage. She managed to shift easily between each of her characters, from RBG’s son James as a young boy to an array of adult men and women. Her gestures were economical, yet portrayed far-ranging emotions. Throughout the evening, Chang played the modally-oriented, sweeping music with command and emotional depth.

Michaels wrote eminently singable and graspable songs for this set. It is a marvel that she turned such varied prose from letters, interviews, and Supreme Court opinions into successful music. Singing selections from Court opinions shouldn’t work, but her choice of something like psalm tones gave the five short excerpts the weight and transparency the words needed.

Lee Hoiby’s grand setting of “Lady of the Harbor,” Emma Lazarus’s poem on the Statue of Liberty, helped set the tone and sound world, while Vivian Fung’s setting of Jane Ginsburg’s “Pot Roast Recipe” was delightfully upbeat and quirky. But Stacy Garrop’s “My Dearest Ruth” was the gem of the evening. Setting a moving letter that RBG’s husband Martin wrote to her before his death in 2010, Garrop crafted a tear-inducing vignette worthy of Schubert.

The love and admiration required to create such a rich concert experience was clearly on display. May it travel far and wide, not only for its story of an amazing life, but also for its intrinsic musical virtues.

Franz Schmidt’s Symphony No. 4 showcased the ensemble, under guest conductor Jonathan Berman, in the standard conventions of a not-so-standard piece. But at the start of the program, the musicians were equal partners to pianist Cédric Tiberghien, whose playing could be as bold as the full orchestra or as intimate as any instrumental solo. END_OF_DOCUMENT_TOKEN_TO_BE_REPLACED

END_OF_DOCUMENT_TOKEN_TO_BE_REPLACED

Jackson began the program with a recitation of Langston Hughes’ poem “Helen Keller” — the first of five poems by Hughes that served as interludes between each piece on the first half. END_OF_DOCUMENT_TOKEN_TO_BE_REPLACED

Pianos with pins and tape on strings, a bass drum and tam tam, crotales, Almglocken, and vibes. Microphones were hooked up all around the instruments. The feed was sent to speakers around the room. Lighting designer Nicholas Houfek hung incandescent globes over the arrangement of instruments from thin black wires stretching across the beams. END_OF_DOCUMENT_TOKEN_TO_BE_REPLACED

From the podium, Elim Chan set an ambitious tone for the evening. The rising star conductor, here in her Cleveland Orchestra debut, has a commanding style, and every twist and turn in Saturday’s performance tracked closely with her baton. END_OF_DOCUMENT_TOKEN_TO_BE_REPLACED