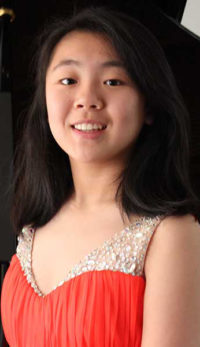 This year’s sole competitor from Ohio in the Cooper International Piano Competition, fourteen-year-old Kasey Shao began her studies at age six. During a recent telephone conversation from her home in Cincinnati, the Walnut Hills High School sophomore said that she has known about the Cooper Competition from the time it began. “I’ve watched the live streams and broadcasts, and I’ve always wanted to compete in it. Now that I’m finally old enough, I applied and got in. I’m very excited to compete and to meet the other contestants.”

No stranger to the competition world, Shao is a two-time grand-prize winner of the National League of Performing Arts. She has been awarded first prize at the Crescendo International Music Competition, West Chester Piano Competition, and Princeton Festival Piano Competition, as well as grand prize and first place at the Steinway Society of New Jersey Young Pianist Competition.

Already this year, Shao was awarded second place and Best Chopin prize at the Music Teachers National Association nationals, and first place at the Steinway & Sons Piano Competition. As the winner of the children’s division at the Albert M. Greenfield Concerto Competition at the age of twelve, the pianist performed Mozart’s Piano Concerto in A Major, K.448 with the Philadelphia Orchestra under the direction of Yannick Nezet-Seguin at Verizon Hall in Philadelphia’s Kimmel Center.

“I love competing,” she said, “but it’s more than that. It’s about sharing your joy for the music with the audience.”

Shao will arrive at the Cooper prepared to play works by Beethoven, Chopin, Liszt, and Albeniz as well as Webern’s Variations for Piano Op. 27. “My teacher, Professor Ran Dank, gave it to me. At first I didn’t like it,” she said. “The Webern was one of the first twelve-tone pieces I played. It took a long time to analyze, but once I began to understand it, the piece became a part of me, and now I enjoy playing it.”

Shao noted that the work is not really a set of variations. “Webern said that it is the third movement that is a variation on the first movement. The first movement is in sonata form, but he uses a mirror technique so phrases are reflected –– it has this really cool structure –– and the second movement is in binary form.” Regarding the third she said, “you have to break it down and see how each variation relates to the other and has its different style and voice — my teacher was very helpful in figuring all of that out.”

Shao’s ability to break down musical lines will also be showcased during Shostakovich’s Prelude and Fugue in D-flat, Op. 87, No. 15. What secrets does she have for playing a fugue? “The most important thing is learning the notes,” she said with a laugh. “This fugue is really biting — the theme is chromatic, and it comes back a lot, but it’s hidden in between all of these different voices. At first it sounds like a lot of noise, but again, once you break it down and pick out the theme and the different episodes and interlocking motifs he puts in, it’s a fun piece. The prelude is a brisk waltz, and at the beginning he includes the “We Wish You a Merry Christmas” motif.”

Additionally, the young pianist has chosen to play Bach’s Prelude and Fugue No. 15 in G, BWV 884, from Book II of The Well-Tempered Clavier. Is her approach to playing a fugue by Bach any different from playing one by Shostakovich? “A lot is similar,” she said. “Shostakovich based his own set of 24 Preludes and Fugues on Bach’s set of 24. In Bach, each one has its own voice and feeling, and the one that I am playing is very sunny and charming. It’s short but filled with flourishes, and is fun to play.”

Born in Louisville, Kasey Shao moved to Philadelphia with her family where she lived for ten years. The family then moved to Cincinnati when her father accepted a position as a professor of immunology at the University of Cincinnati, and she soon began studying with Ran Dank.

“He’s very knowledgeable and I’ve learned a lot about different musical styles and techniques. He has a friendly approach, and his unique technique helps me with my sound production and musicality. I feel like my playing has improved so much with him.”

When asked about her performance with the Philadelphia Orchestra, Shao said it was a dream come true. “Yannick is a fun guy. He’s really open, and it was so easy to talk to him about interpretation. The Orchestra is so nice –– it felt like a big family.”

Although Shao’s musical goal is to be a concert pianist and to travel around the world performing in big venues, she said that a musician’s career isn’t only about being a soloist. It’s also about collaboration.

“Since third grade I’ve accompanied my school orchestra, choir, and band, and in middle school I was a part of the jazz band and chamber orchestra. I really enjoy chamber music — I’ve played piano four hands and in a couple of trios. I feel like it’s important to play with other instruments because a lot of my teachers have told me that the piano is like an orchestra. Collaborating with other instruments helps me with my music because it gives me insights into what they sound like.”

Given all of Shao’s musical accomplishments, it would be natural to think that she has little time for anything else — but think again. “Walnut Hills is a great school. I’m part of the Science Olympiad and I learn a lot from my teammates. I’m also part of the Model United Nations and flew to the conference this year at Harvard with a couple of teammates.” The pianist was also recently inducted into the National French Honor Society.

Additionally, Shao serves as a staff writer for the school newspaper. “I do a lot of interviews and articles. It’s really fun.” How does she prepare to conduct an interview? “A lot of my friends are in Chatterbox so I get some help from them, but I mainly got help from my brother who was the editor-in-chief of the newspaper at his high school in Philly. I try to learn about the person I’m interviewing, and I try to be knowledgeable about the subject so I can have a conversation.” Has she considered being a music writer? “Not really,” she said laughing.

I asked Shao if there was anything else that she wanted to share about herself. “I love reading dystopian novels. I like Ray Bradbury and George Orwell short stories. They are so imaginative and get you to think outside the box. I also love art because my mom is an artist. I took a sculpting class at school and that was fun. My favorite artist is René Magritte, he’s famous for putting ordinary objects into unusual contexts. In one of his famous pieces there is a pipe, and underneath he wrote in French, ‘This is not a pipe.’ So you’re left wondering — what is it then?”

END_OF_DOCUMENT_TOKEN_TO_BE_REPLACED

Supported by engagingly, yet simple staging by Cara Consilvio, a well-prepared cast of singers told the archetypal story of Cinderella with charm and flair. Framing the production was  a sparse but colorful set and wonderful lighting by Dave Brooks. END_OF_DOCUMENT_TOKEN_TO_BE_REPLACED