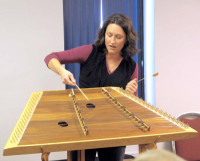 My background is with American Old Time and Celtic, so this is right up my alley — like putting on an old pair of shoes,” said hammered dulcimer player Tina Bergman. We chatted about Apollo’s Fire’s Sugarloaf Mountain rogram in a recent telephone conversation. Performances of this crossover concert will take place from Sunday, June 14 through Sunday, June 21 in a variety of venues including the Huntington Playhouse in Bay Village and the Geauga Lyric Theatre in Chardon (see concert listings for full details).

The title of the program is drawn from music director Sorrell’s childhood, when she played organ in a church in Maryland with a view of Sugarloaf Mountain. The concert will consist of traditional music from Scotland, Ireland, America, and Africa.

How was the music selected? “There’s a trajectory here of being in Scotland and having to say goodbye, and then the celebration of landing in the new world,” said Bergman. “The story covers all of the universal truths of the human experience. In Scotland you’ve got this need to move and explore, and the opportunity to visit far-flung lands. At the same time, there’s this incredible connection to home, and the conundrum of how you carry home with you when you leave. There’s the joy of leaving, but also the heartsick aspect of knowing you may never see your friends and family again. All of those emotions come through in the music. Then when we reach America, there’s a big celebration and a musical exploration of all of the different aspects of American culture.”

How are the different musical traditions related? “The American, Celtic and Irish are very similar,” Bergman responded. “The Scots and the Irish came over, and their music dovetailed with the American fiddle tradition, so there’s a lot of continuity. Actually, there were African string band traditions in America, and certainly a tradition of spirituals. There are a lot of tunes that have different versions, like the ‘Highlander’s Farewell,’ which is a raucous song in both the American and the Scottish version.”

What led to Bergman taking up the hammered dulcimer? “I started playing when I was eight. This is crazy, but I had chicken pox four times when I was a kid! It took me a long time to develop an immunity to it. The last time was horrible, so my mother gave me the hammers for the dulcimer and said, ‘Here! Go play this instrument,’ which was great because it occupied my hands. So I took to it naturally, and I liked it quite a bit more than the lap dulcimer because the hammered dulcimer is a very physical instrument. I enjoyed that as a kid.”

And how did she get started with Apollo’s Fire? “My role has been with the crossover concerts, and this is my seventeenth year with Apollo’s Fire. The first time I performed with them was at an anniversary of Ohio’s statehood with a small version of Apollo’s Fire — but a larger version of the folk orchestra that you usually see with the crossover concerts. The crossover became a popular part of their offering, especially when they found that perfect barn out in Hunting Valley. In more recent years, I’ve been involved in Sacrum Mysterium (Celtic Christmas Vespers). And most recently, I’ve taken part in Sephardic Journey, which is really a tremendous program.”

When did this particular ensemble form? “This band that was put together last year. Most of us had played together before through Apollo’s Fire for one thing or another, but Susanna was the new kid on the block. She was just wonderful. It’s incredible working with Amanda Powell and Ross Hauck. They bring so much passion and authenticity to this program. My fellow musicians are terrific — it’s such a pleasure to play with such soulful and dedicated colleagues.”

Jackson began the program with a recitation of Langston Hughes’ poem “Helen Keller” — the first of five poems by Hughes that served as interludes between each piece on the first half. END_OF_DOCUMENT_TOKEN_TO_BE_REPLACED

Pianos with pins and tape on strings, a bass drum and tam tam, crotales, Almglocken, and vibes. Microphones were hooked up all around the instruments. The feed was sent to speakers around the room. Lighting designer Nicholas Houfek hung incandescent globes over the arrangement of instruments from thin black wires stretching across the beams. END_OF_DOCUMENT_TOKEN_TO_BE_REPLACED

From the podium, Elim Chan set an ambitious tone for the evening. The rising star conductor, here in her Cleveland Orchestra debut, has a commanding style, and every twist and turn in Saturday’s performance tracked closely with her baton. END_OF_DOCUMENT_TOKEN_TO_BE_REPLACED