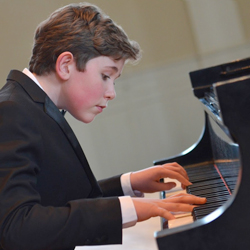 Granville, OH native Gavin George first appeared on the Tri-C Classical Piano Series in November of 2014 at the age of eleven. He returned to Gartner Auditorium at the Cleveland Museum of Art on Sunday afternoon, February 12, now thirteen, several inches taller, and even more mature and nuanced in his playing than before — and before was jaw-droppingly impressive.

George’s lucid textures and singing lines beguiled the ear, even when colors turned dark in Schubert’s Impromptu, Op. 142, No. 3. Sitting quietly and gazing at the keyboard, he was the picture of concentration as he effortlessly spun out Schubert’s variations.

The pianist, who studies with Antonio Pompa-Baldi, took on Schumann’s 20-movement Carnaval as his big piece in the first half of the program. Playing with unflinchingly steady rhythm and employing a whole palette of colors, he captured the individual personalities of the masked revelers. Pianists can get lost in Schumann’s extended works, but George knew where the pathway lay. He introduced his audience in turn to Pierrot and Arlequin, Eusebius and Florestan, Pantalon and Columbine, and the warring Davidsbündler and Philistines, keeping all their stories straight.

After intermission, two large works finished out the afternoon. Chopin’s B-flat minor Sonata and Liszt’s Hungarian Rhapsody No. 2 appear frequently on the finger-busting playlists of young virtuosos. They invite over-playing of the sort Oscar Wilde probably had in mind when he said, “Nothing exceeds like excess.”

Again, in Gavin George’s capable hands, lucidity and musicality prevailed. The opening movement of his Chopin enjoyed a performance of classic proportions. Its funeral march was measured but forward-moving, its Presto finale a finely-paced toccata of relentless triplets.

In terms of flair, George did go for broke with the Liszt, but never overstrained his capacity. Most of the piece is a virtuosic cadenza, so the optional one indicated in the score seems superfluous. The pianist played one anyway, an outburst that out-dazzled the written notes. At the end, as he had done all afternoon, Gavin George bounced off the bench looking as though he’d never enjoyed anything more than playing the piano at this very moment.

The audience clamored for an encore. Rachmaninoff’s g-minor Prelude from Op. 23 did the trick for them on Sunday.

END_OF_DOCUMENT_TOKEN_TO_BE_REPLACED

Rodgers & Hammerstein’s Cinderella was originally produced for television in 1957 — seven years after the animated Disney film was released — and starred Julie Andrews. According to the Rodgers & Hammerstein website, it was viewed by over 100 million people. END_OF_DOCUMENT_TOKEN_TO_BE_REPLACED

The story line has its origin in an 1855 play and an 1842 farce that Thornton Wilder mined for his 1938 play The Merchant of Yonkers. When that turned out to be a flop, in 1954 Wilder made the crucial decision to re-center the show around the character of the legendary marriage broker Dolly Gallagher Levi and renamed it The Matchmaker. END_OF_DOCUMENT_TOKEN_TO_BE_REPLACED

The Dodero Center for the Performing Arts at the Gilmore Academy in Gates Mills is one feature of an impressive campus. The auditorium is shallow, the stage is deep, and the ensemble played without a shell. Throughout the program, the sound, especially in instruments’ lower registers, tended to disappear. END_OF_DOCUMENT_TOKEN_TO_BE_REPLACED