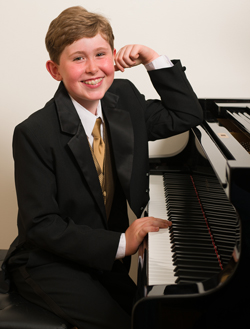 There are probably other 11-year-old pianists who can wow an audience with technical fireworks, but it’s difficult to imagine another young performer who could come close to Gavin George in sheer musical maturity. On Sunday afternoon, the Granville, Ohio-based student of Antonio Pompa-Baldi applied his steady and reliable fingers to a full recital of music by Bach, Haydn, Liszt, Prokofiev, Rachmaninoff and Chopin. Presented in Gartner Auditorium at the Cleveland Museum of Art, this was the second of three recitals in the Tri-C Classical Piano Series. The hall was packed with listeners of all ages.

George’s steadiness and his ability to clearly voice lines immediately revealed themselves in J.S. Bach’s C-Major Prelude (WTC II) and in a more highly articulated form in Haydn’s Sonata in C, Hob. XVI:50. In the Sonata, George caught Haydn’s sense of high spirits and humor, and added pedal to some repeated material for an interesting effect.

His understated performance of Liszt’s second Ballade began with a gloomy, atmospheric bass passage, but his expert layering kept textures clear throughout. Though George has plenty of digital strength, he doesn’t quite yet have the heft some pianists apply to Liszt, and that was refreshing to hear.

A sense of calm playfulness pervaded Prokofiev’s third Sonata, and George found some arresting details to point up, including a well-planned accelerando into the Scherzo.

Gavin George also has a good ear for colors and voicing, traits that he used to fine advantage in Rachmaninoff’s rangy but fascinating Variations on a Theme of Corelli.

Finally, the pianist also displayed a keen sense of scale in six of Chopin’s op. 10 Études. These were showpieces in the composer’s day, but of a different magnitude than you can hear them played today, thanks to the power of nine-foot concert grands. In Gavin George’s hands, the six pieces sparkled with smooth virtuosity but remained light and transparent. The last, the “Revolutionary” Étude, was a case in point. None of the excitement went missing, but George’s expert touch made music out of Chopin’s left-hand rumblings in the way the composer probably had in mind.

After every selection, Gavin George bounced off the bench with a wide grin. Following the ovation that followed the Chopin, he took the bench again for a lovely encore: Debussy’s Clair de lune, as sensitively played as everything that had gone before.

A 20-minute intermission split the program and apparently confused some of the audience into thinking the recital was over (one departing listener asked, “is there something else going on in here next?”) A significant chunk of the crowd never made it back for the second half, which was too bad. They missed some stellar piano playing.

END_OF_DOCUMENT_TOKEN_TO_BE_REPLACED

Rodgers & Hammerstein’s Cinderella was originally produced for television in 1957 — seven years after the animated Disney film was released — and starred Julie Andrews. According to the Rodgers & Hammerstein website, it was viewed by over 100 million people. END_OF_DOCUMENT_TOKEN_TO_BE_REPLACED

The story line has its origin in an 1855 play and an 1842 farce that Thornton Wilder mined for his 1938 play The Merchant of Yonkers. When that turned out to be a flop, in 1954 Wilder made the crucial decision to re-center the show around the character of the legendary marriage broker Dolly Gallagher Levi and renamed it The Matchmaker. END_OF_DOCUMENT_TOKEN_TO_BE_REPLACED

The Dodero Center for the Performing Arts at the Gilmore Academy in Gates Mills is one feature of an impressive campus. The auditorium is shallow, the stage is deep, and the ensemble played without a shell. Throughout the program, the sound, especially in instruments’ lower registers, tended to disappear. END_OF_DOCUMENT_TOKEN_TO_BE_REPLACED