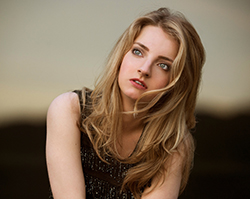 Active on the international piano scene for around a decade, Lise de la Salle continues to rise. In a recital for the Tri-C Classical Piano Series this week, she explored one of the fundamental elements of the human condition, often invoked yet seldom considered in depth: love. At the Cleveland Museum of Art’s Gartner Auditorium on March 18, though de la Salle often explained to the audience the reasoning behind her programming choices, these commentaries proved less powerful than the combination of her musical and gestural sensibilities. Pausing between pieces or movements, arms aloft and eyes closed, she held the audience spellbound and waiting even after the sound had faded.

And what a sound! At the beginning, de la Salle demonstrating utter mastery of Liszt’s transcription of Robert Schumann’s song Widmung. Even the word mastery fails to capture the balance of elements that she established in a piece that, like many of Liszt’s transcriptions, includes enough interlocking lines to overwhelm three pianists, let alone one. The successions of repeated chords rose and fell in volume without calling attention to themselves. The melodic line floated along independently, and the texture swelled and calmed according to the pianist’s precise pedaling.

In de la Salle’s hands, Liszt’s transcription of Schubert’s iconic Ständchen sounded fresh. Leaning into the song’s darker elements, she accessed that particular mood of broken hope that Schubert perfected in his extended song cycles. Giving the final chord a moment to decay but leaving no space for applause, she then launched into another Liszt transcription, “Isoldes Liebestod” from Wagner’s Tristan und Isolde. She showed tasteful restraint throughout this gradual crescendo to transcendence: at the moment of harmonic breakthrough that marks the peak of the aria, she allowed the low chords to blossom from silence rather than hammering them into being.

The first half of the program ended with Robert Schumann’s Fantasie in C. The first movement’s cascades of figuration were as sparkling and unforced as the currents of a stream. De la Salle’s left hand deserves praise all its own; she has a way of articulating lower notes that yields rattling, authoritative stabs of bass pitches. The well-paced blaze of glory that ended the second movement yielded spontaneous applause, and the third movement found de la Salle bringing out the sublime qualities of the wordless Ave Maria.

If the second half of the program lacked some of the magic of the first, its shortcomings stemmed from the pianist’s choice of repertoire rather than from her playing. Prokofiev’s ballet music for Romeo and Juliet, ubiquitous in the form of symphonic excerpts, also gave rise to a unique ten-part suite for piano. While Liszt filled out his transcriptions of songs and opera scenes with hand-taxing contrapuntal textures, Prokofiev took the opposite tack, leaving his adapted music relatively unembellished. On another program, these familiar and lesser-known moments from the ballet score might have been a highlight. But after the unbroken warmth and richness of the opening half, Prokofiev’s sketches and vignettes registered as sparse, even stark.

The soloist nonetheless tackled the material with the sensitivity that characterized the rest of the program, allowing her sheer technical prowess to animate the outer portions of “Juliet, the Young Girl” but infusing the middle section with profound feeling. All in all, de la Salle gave a brilliant, unforgettable performance. Find her recordings and remember her; if there is any justice in this world, hers will be a household name before long.

The Cleveland Orchestra’s second performance of the new season on Sunday afternoon, October 17 at the newly renamed Mandel Hall at Severance Music Center was just such an occasion. If the ensemble’s return to public concerts under the baton of Franz Welser-Möst wasn’t enough reason to light a bonfire, the Cleveland debut of a new work written for one of the Orchestra’s most popular soloists, and the swan song of one of its longest-serving members added extra fuel to the celebration. END_OF_DOCUMENT_TOKEN_TO_BE_REPLACED

Cleverly, CityMusic’s latest concert led listeners through these changes one step at a time. “Musical Matrix” took transformation as its theme, and each piece on the October 2 program at the Maltz Performing Arts Center (the second of two performances) put its spin on the subject. END_OF_DOCUMENT_TOKEN_TO_BE_REPLACED