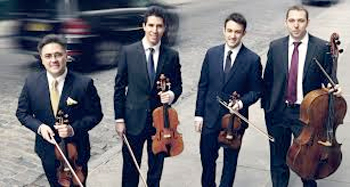 “The string quartet repertoire is perhaps richer than any other musical form,” cellist Brook Speltz said during a recent telephone conversation. “There is a purity to the soprano, alto, tenor, and bass combination of instruments that is equal to a choir, and that has inspired many composers.”

On Wednesday, April 26 at 7:30 pm in Akron’s E.J. Thomas Hall, Speltz will join his Escher String Quartet colleagues — violinists Adam Barnett-Hart and Aaron Boyd and violist Pierre Lapointe — in a performance featuring works by Claude Debussy, Dmitri Shostakovich, and Felix Mendelssohn. The concert, presented by Tuesday Musical, marks the culmination of the Escher’s first year as TMA’s Quartet-in-Residence, a performance and education initiative.

Speltz said that Mendelssohn’s Quartet No. 6 in f makes a great opener. “His last fully completed string quartet is known for its drama — that carefree Mendelssohn that exists in almost all of his music is nowhere to be found. He wrote it after the death of his sister, who was his best friend and sort of life companion, and it’s relentless in its combination of anxiety and passion that at times almost feels like anger.”

A work new to the Escher’s repertoire this year is Shostakovich’s Quartet No. 9, which Speltz described as a transition piece between the composer’s middle and later quartets. The cellist also believes it is no coincidence that it is written in the same key as Beethoven’s Eroica Symphony and Emperor Concerto. “E-flat was always a heroic key for Beethoven. And compared to Shostakovich’s 7th and 8th quartets, the 9th has a sense of optimism. You do hear that frozen quality that became so definable in his music — that sparsely written, cold sound — but it ends in the most spectacular and exciting manner. In my opinion it’s one of the great 20th-century quartets.”

Speltz said that like many composers, Debussy felt the burden that goes along with writing a string quartet. “It was his first foray into writing chamber music, and the only quartet that he wrote. Although the final product is a masterpiece, I do think that he struggled with it — like all great composers whose string quartets are their most personal works. It has that luscious, sensual quality, especially in the third movement, which is one of the most beautiful things ever created. It is a popular piece, but for very good reason.”

Why is writing for string quartet so difficult? “To only write for four parts demands a quality use of each voice — you have to maximize every moment for each instrument. You’re not working with a large landscape, so creating something that has a full sonority requires very careful writing.”

Regarding their first year as Tuesday Musical’s Quartet-in-Residence, Speltz said that he and his fellow Eschers are indebted to TMA’s executive and artistic director, Jarrod Hartzler, whose dedication and vision have enabled them to accomplish far more than they could have ever imagined. “We’ve worked extensively all over Northeast Ohio,” Speltz noted. “It’s been a whirlwind, but Jarrod is relentless in his pursuit of this idea. He tells us where to go and we go.”

In addition to performing school concerts, the Escher also make regular visits to the University of Akron. “The goal is not to make everybody a musician,” Speltz said. “What we want is for kids, whether it’s a year or ten years down the road, to remember what they heard and be struck by it in some way. And maybe in fifteen years they’ll say to themselves, ‘I heard a string quartet before and I rather enjoyed it. I think I’ll go to the concert.’”

The group was most taken by their visit to Holmes County. “We were overwhelmed by the positive response we received there. At the final concert, there were 500 people packed into the high school gym. They stayed and talked and asked questions, so we felt like we had done some good work down there, and that was particularly rewarding. Jarrod has been incredible in giving us these opportunities, and we’re very thankful.”

The Escher will have a busy Wednesday leading up to their evening concert. At noon in the atrium of the City of Akron Municipal Building, the Quartet will launch the Decompression Chamber, Tuesday Musical’s new program aimed at easing stress in Akron workplaces. The series will bring free concerts to employees and clients at hospitals, government offices, factories, social service agencies, and other high-pressure sites.

“Research shows that classical music can not only decrease stress, but also boost brain function, improve productivity, increase physical performance, and sharpen memory,” Jarrod Hartzler explained in a press release. “With Decompression Chamber, we want to share all of those benefits with people throughout Akron.”

The music isn’t easy to play, either. Over the course of two hours, all of the musicians brought fantastic focus to the unrelenting tricky rhythms and countless layers of parts, all of which require a high level of individual responsibility. Even in the moments of calm, the accompaniment remains perpetually unsettled. Adams — who made a sprightly presence on the podium — combines minimalist, repeating motives in gradual layers, which eventually become so dense they overwhelm the senses. Lisa Wong deserves special mention for her thorough preparation of the Cleveland Orchestra Chorus, as does Jennifer Rozsa for the Children’s Chorus, which made a brief but memorable appearance in the last few minutes. END_OF_DOCUMENT_TOKEN_TO_BE_REPLACED

Warner was a fitting choice not just symbolically, but also sonically. The combination of Baroque strings, theorbo, harpsichord, and organ created a nice blend and balance, allowing the opportunity for softer instruments to stand out. In Johann Rosenmüller’s Sonata à 5 in g, Doug Balliett’s violone pizzicatos resonated beautifully, and in Johann Heinrich Schmelzer’s Sonata in d, harpsichordist Elliot Figg became an equal player in the texture with his clever improvisations. The slight exception was Joshua Stauffer on theorbo — despite the instrument’s big physical presence on stage, he received little time in the spotlight. END_OF_DOCUMENT_TOKEN_TO_BE_REPLACED