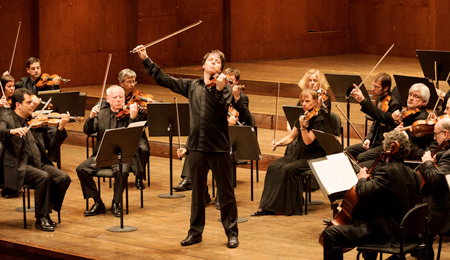 On Friday, March 11, when the Tuesday Musical Association brought the Academy of St. Martin in the Fields to E.J. Thomas Hall in Akron, it was wonderfully apparent why the group is one of the most well known and recorded orchestras in the world. Led by Director and violinist Joshua Bell, their well-planned program took the audience on a musical exploration of the landscape between the Classical and Romantic periods.

Sergei Prokofiev’s Classical Symphony, Op. 25, which opened the program, was intended by the composer to be a modern take on the orchestral music of the 18th century, hence the title. The performance gave the work clarity and cohesion. The strings sounded as one, and the ensemble’s balance was striking, melodic lines weaving clearly through the orchestra, no gesture or phrase obscured. Thoughtful tempos brought out the intended character of the composition, from the slow and deliberate first and third movements to the speedy and exciting fourth.

Leading from the concertmaster chair, Bell was a joy to watch. He used his expressive body language to achieve unity, sometimes gesturing with his bow to help coordinate critical entrances throughout the orchestra.

Moving to center stage to perform Tchaikovsky’s Violin Concerto, Bell and the orchestra embarked on a thrilling romp through the dramatic extremes of this Romantic work. A wonderful vehicle for Bell, the concerto allowed him to do what he does best: swaggering back and forth between impassioned, showy playing with lots of portamento scoops, and delicate moments of tender, understated lines.

The precision of the orchestra was extraordinary. Any questions about the feasibility of conducting from the violin that arose when Bell took over the directorship of the orchestra in 2011 have obviously been answered. Perhaps it is liberating for him to lead when playing solo. He doesn’t have to worry about a conductor agreeing with his interpretation. It’s one thing to conduct from the soloist’s position in a Baroque or early Classical piece, and quite another to indicate the many changes in tempo and mood in this work from the Romantic era. The Academy’s accuracy can be taken as a reflection of Bell’s leadership and the ensemble’s remarkable ability to play with exactitude.

The brilliance of the ending of the first movement evoked a long round of spontaneous applause. The lovely wind playing that opens the second movement was followed by an exquisitely performed solo line from Bell. Baring his emotions in this quiet movement, his playing was touching and raw, supported with obvious affection by the orchestra. The third movement was big, warm, and passionate, sprinkled with astonishingly quick and agile passage playing from the violinist.

Following intermission came a lesser-known work by Robert Schumann. His Violin Concerto, mvt. II (originally intended as a slow movement for a violin concerto) was written four months before the composer’s attempted suicide and subsequent confinement to a mental hospital for the remaining three years of his life. Not performed before his death, it was resurrected 30 years later by Benjamin Britten, who wrote a codetta for the work. Scored for strings alone, it includes a cello solo that was played beautifully by Stephen Orton, Bell’s solo violin line floating serenely above.

The last work on the concert was Beethoven’s Symphony No. 8. Surrounded by his seventh and ninth symphonies, Beethoven’s Eighth is more of a look backward in style, in spite of its playful, forward-reaching harmonies. It seemed especially Classical in nature on this program, following a truly Romantic work as well as Prokofiev’s modern parody of a Classical symphony.

Like all of the works on the program, Bell’s interpretation of the Beethoven was passionate. The Academy’s spirited and exuberant playing often caused the ensemble to sound like an orchestra twice its size. After five years as Music Director of ASMF, Bell has firmly established himself as the leader of this exceptional group.

END_OF_DOCUMENT_TOKEN_TO_BE_REPLACED

Then, you heard all the qualities that make for a stunning soloist. Winner of the 2013 Cleveland International Piano Competition, Khristenko was back in town this month for a recital in Piano Cleveland’s summer series, Piano Days @CLE. And he couldn’t help but revel in the spotlight a little, even as he settled into a more collaborative role at the keyboard for his program, “Stanislav and Friends.” END_OF_DOCUMENT_TOKEN_TO_BE_REPLACED

Now, both pieces on Saturday might be called one thing, but they really sound like another. “Symphony” is a title that would fit Sergei Rachmaninoff’s Piano Concerto No. 2, as well as John Adams’ modern masterpiece for orchestra, Harmonielehre. END_OF_DOCUMENT_TOKEN_TO_BE_REPLACED

And the Orpheus effect has everything to do with who’s not onstage. The New York City-based group has rehearsed and performed without a conductor since its founding in 1972, and this means its members share the musical authority that typically rests with one person. Multiplied by a dozen or so, the interpretation of a piece suddenly emanates from every player, from the concertmaster to the double bass, resonating with a kind of collective power. END_OF_DOCUMENT_TOKEN_TO_BE_REPLACED