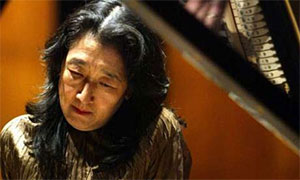 It is always a delight to hear Mitsuko Uchida play the piano. In many ways, she’s the Platonic ideal of a classical musician. Focusing on Viennese classics and other heavyweights, she plays with finesse and precision. Her touch is always beautiful, never veering into the bombastic or straying into the muffled. Everything is in good taste.

In most of her repertoire, this gives Uchida an upper hand. In Mozart, every note is a pearl, but in works that tend toward the diffuse and the wandering, her interpretation of the music highlights its faults. Thus the opportunity to hear Uchida take on three sonatas by Schubert at Severance Hall on Sunday, November 3 was both magisterial and frustrating.

Clearly at his best in miniatures and art songs, Schubert’s instrumental music tends toward the Brucknerian, featuring excessive repetition of ideas. Yet gorgeous oases bring an almost spiritual joy. If one is willing to sit through Schubert’s longueurs, Uchida can make an astounding achievement out of these works.

The first half of the concert showed Uchida’s judicious playing in more modest Schubert works. She paired the early three-movement Sonata in a, D. 537 with the later two-movement Sonata in C, D. 840. The former opens grandly and wanders through dreamy keys set off by breathless pauses. The plucking accompaniment of the slow movement was always bouncy, its lovely melody always straightforward. In the final rondo, she gave a forward thrust to this dancing music, achieving evanescent, soft dynamics.

The Sonata in C is clearly two weighty opening movements of an incomplete work. The first movement plays with the four-note rhythm Beethoven used in his Fifth Symphony. Each movement eventually wore out its welcome, and after 30 minutes, one hoped for some uncharacteristically Horowitzian gesture from Uchida to break up the perfect monotony of tastefulness.

Following intermission came the most hallowed of Schubert’s piano music: the last sonata, in B-flat, D. 960. Uchida made the opening theme of its 20-minute first movement sound like morning dew each time it returned after the rumblings of the low trill — here more like a dark cloud than an evil to be feared. Uchida’s playing in the glacial slow movement had moments of joyful stasis despite Schubert’s repetitions. The final two movements, concise and fleet-footed, were a joy to hear, and more geared toward the pianist’s clarifying aesthetic. The audience was clearly moved by Uchida’s playing, granting her a well-earned and extended standing ovation.