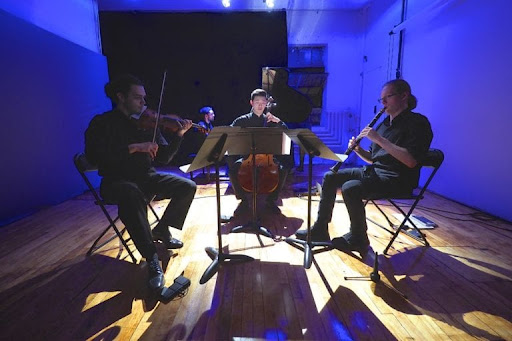 I was once told that it’s good to not think too much about life’s problems. However, there are more than enough reasons to ask yourself: why more isn’t being done to combat climate change? How much is corporate greed responsible for the changes? Why do people buy into mass marketing?

The centerpiece of the evening was Christopher Stark’s environmental treatise Fire Ecologies. The performance also marked the premiere of the full video art by Zlatko Ćosić. Throughout the seven-movement, 55-minute work, the ensemble was in top form. Each player was in command of their own demanding part while making even the thorniest technical tutti passages sound effortless. Above all, the musicians were in perfect sync with the visually stunning projections.

In the opening movement “terra incognita” (Unexplored Territory), sounds of wind and the ocean slowly combine and increase in volume before transitioning into “jeux d’eau” (water games). Here, footage of water, ducks, blue skies, and smoke after forest fire provide a picturesque backdrop to the music’s lush choral sounds with long accents — along with some demonic electronics.

Prior to the performance, Ford Fourqurean told the good-sized audience that Stark’s work found inspiration in Messiaen’s Quatuor pour la fin du temps. This relationship was most clear in “louange à l’éternité de Mère Nature” (Heart of Mother Nature) with its long, sustained cello lines hovering over organ electronics that was a haunting juxtaposition to the video’s blue skies. Here cellist Casian-Lakoš outdid herself.

During “Infernal dance” (Dance from Hell) the video takes you on a highway ride with smoke rising in the background, while “Dypt inne i Barskogen” (Deep in the Forest) features frantic, quick instrumental passages and deep bell sounds from the electronics. In “Marche funèbre” (Funeral March) we find projections of power lines in Central California with steady, unfriendly sounding beats in the ensemble until silence takes over, and the sight of burning grass with a crane gradually morphs into a moose. The music then seamlessly returns to a reprise of “terra incognita” — this time with high harmonics in violin and cello, and flutter-tongue in clarinet, which all slowly fade away.

While Fire Ecologies is often a disturbing commentary on man’s disregard for the earth,  the work also suggests a sense of hope that ultimately nature will prevail.

The program opened with Doug Bielmeier’s relentlessly busy Corporate Responsibility Pledge. An electronic ostinato is constantly interrupted by the acoustic instrumental motifs, while Allison Tanenhaus’s inventive videos of cars, polluted water, quarantined beaches with sludge, and mountaintop removal mining, along with hyperbolic messages telling consumers “name your price” and “must see.” The music builds in texture and volume until it collapses.

The evening’s social commentary also included a musical take on the perfume fragrance Rose 31 composed by the electronic duo No Plexus. The score features rhythmic keyboard passages under chorale-like phrases in the cello and bass clarinet. These transition into extended continuous accented chords and slides. A shrill vocal line repeats “your existence, their victory” over and over. Throughout, the video features rose and blue colors along with abstract shapes that morph into a seemingly endless array of hues.

Published on ClevelandClassical.com May 6, 2022.

END_OF_DOCUMENT_TOKEN_TO_BE_REPLACED

The strings-only work by Berg has made relatively frequent appearances on the Orchestra’s programs. In 2021, the musicians recorded it for the In Focus series, and it appeared again on last year’s European tour. Friday’s rendition maintained the group’s characteristic light and effortless playing, each section blending as much as possible to echo the work’s original form as a string quartet. At fifteen minutes total, the piece is quite short, but the dense encoded musical meanings require some extra-attentive listening. Splitting up the three movements ensured that each one could be appreciated on its own. END_OF_DOCUMENT_TOKEN_TO_BE_REPLACED