This particular evening, titled “Beat Music and Poetry,” begins with a cocktail hour at 4:30 pm. The 5:30 concert by Akros Percussion will include the Stockhausen, George Crumb’s Idyll for the Misbegotten, featuring Jane Berkner on amplified flute, and selections from Frederic Rzewski’s politically inspired Fall of the Empire for speaking percussionist.

And at 6:45, while small plates are served and a cash bar awaits, saxophonist Chris Coles will join lyricist and vocalist Orlando Watson and BOYGUN (“Beyond Our Years, Gradually Undoing Negativity”) for jazz and poetry. Tickets are available online.

Last week, I reached Matt Dudack of Akros Percussion to discuss “Music in the Belly,” a title which came to Stockhausen during an evening he was spending with his two-year-old daughter Julika. After her stomach grumbled, he joked, “You have music in the belly!” and she responded with an unusual fit of laughter — so long that Stockhausen became concerned.

Jarrett Hoffman: This is a very interesting piece — there’s a lot to talk about.

Matt Dudack: (laughs) Yeah, you could say that. 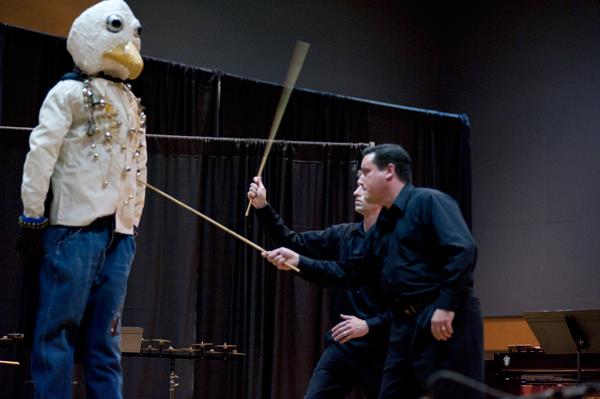 JH: First of all, I noticed that the cover photo on Akros Percussion’s Facebook page seems to be an image from a performance — we see two of you striking the doll Miron. Is this an important piece for the group?

MD: We started playing it a number of years ago, and it’s become kind of a signature work for us. You need some very specific instruments to pull it off, including three music boxes that are custom-made by the Stockhausen Foundation. The first performance we did was at the Akron Art Museum, and part of our payment, I guess you could say, was the purchasing of one of those music boxes. Then we had Dr. Larry Snyder at the University of Akron purchase one, and one of our members bought a third. That got the ball rolling with this piece.

Then you need a bunch of tuned bell plates, and one of our members, Bill Sallak, built this instrument using large pieces of industrial steel — a lot of people substitute tuned gongs for that part. There’s an old-fashioned crank top that gives off a pitch when you push down on it — that’s a little hard to find. And of course you need Miron, the bird-man, which was constructed by students at the Akron Art Museum for that first performance. Now we’re onto the second generation of his head.

JH: Did the first one get destroyed from being struck too much?

MD: No, but it was papier-mâché — it was a little crude, and the one we have now is better. The instructions for what he should look like are in the score: he’s supposed to be about seven feet tall, hanging above you, leaning forward, and dressed in a particular way — basically a mannequin with a bird head. I always thought of Sam the Eagle from The Muppets. I think the most recent one we had was created by a prop designer at Kent State, from when Bill Sallak was working there.

So you need all these very specific things. We’ve invested quite a bit of time and money into it, so we want to keep performing the piece. And we’re one of the few groups that can do it with the authentic instruments.

JH: You mentioned the music boxes that are custom-made. The score includes twelve of them, but only three are used in each performance. Obviously that would be an even bigger investment.

MD: It wouldn’t be impossible, but it would be an extreme amount of work. There are twelve that are all based on the signs of the zodiac, and you’re supposed to pick three at random for your performance. We decided to pick three and give generally the same realization every time we play it — though there’s a lot of improvisation within the piece, so there’s some variance. Otherwise we would be learning so many different versions of it.

JH: One of the other interesting things about this piece is that you’re supposed to enter the stage and then move around sort of like mechanical figures. How much has the group dug into that?

MD: When we initially learned the piece, we worked with dancers, choreographers, and theater people to give us some insight into how to move around. It’s not really like a robot, but kind of like those fancy cuckoo clocks where the guy comes out, hits something, and goes back into the house — like this automaton that only articulates at particular joints and is kind of herky-jerky.

So we spent some time in a dance studio with a big mirror, and figured out how we should walk onstage. Some of us have different body types, but we try to be similar. And then at one point in the middle of the piece, as we start striking Miron with the bamboo, we’re sort of released from being automatons and become normal people.

We have two students — recent alums from the University of Akron — who will be playing the marimba part, and they actually came to me today not with questions about the notes or the rhythms or the music, but about how to move, how to get on stage, and how to strike the instrument. It’s one of the challenges — none of us are dancers or actors, but we do a lot of that in percussion.

Continuing our conversation, Matt Dudack (left) and I discussed how Akros Percussion makes sense of the Stockhausen. He said that their concept is mostly accurate to the score (which might have a few inaccuracies of translation), but that it’s also partly their own creation — and that perhaps each member thinks of it slightly differently, as well.

The way Dudack sees it, Miron is a god, and the players are his slaves. At one point, they ward off evil spirits by swinging switches in the air. Eventually they strike Miron — not violently, but in a playful way — which releases them from their automaton-like “imprisonment.”

MD: It’s very unusual and thought-provoking, and it borders on different art forms. Is it theater, is it art, is it music — what is this thing we’re seeing? And that’s kind of the point of a lot of the music that we do. It’s meant to be challenging and experimental, and to raise the question, “Ok, what’s going on here?”