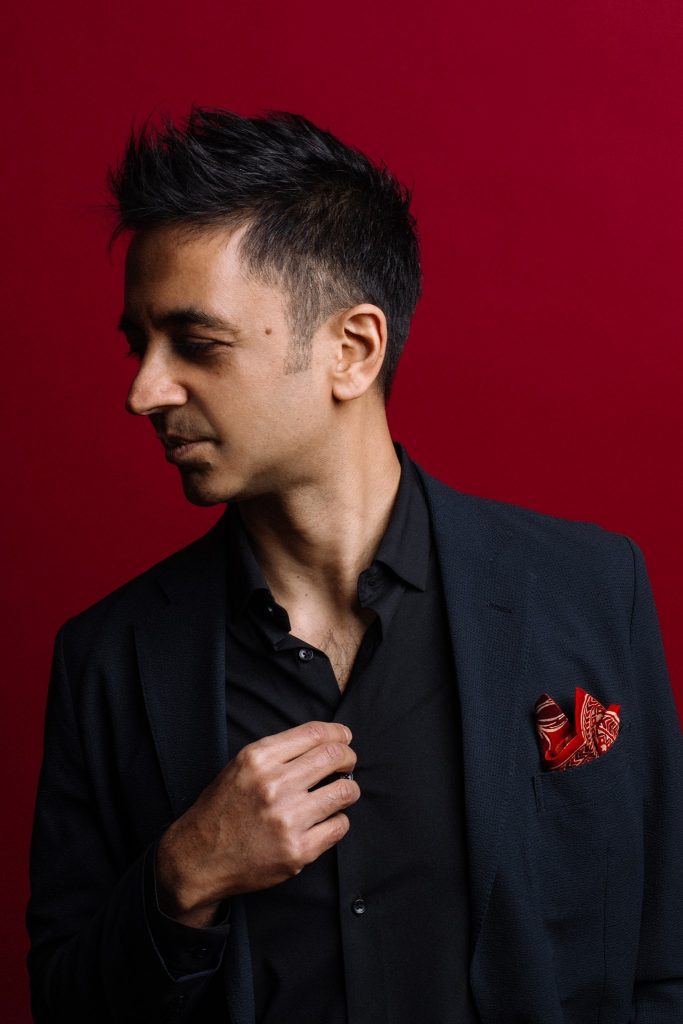 Pianist and composer Vijay Iyer enjoys a multifaceted musical career. The list of people with whom he has collaborated reads like a who’s who in the world of jazz and classical music. His list of awards includes a MacArthur Fellowship, a Doris Duke Performing Artist Award, and a United States Artist Fellowship.

Iyer has released twenty-four albums of his music, most recently UnEasy (ECM Records, 2021), a trio session with drummer Tyshawn Sorey and bassist Linda May Han Oh, and was named the 2022 Jazz Pianist of the Year by the Jazz Journalist Association.

On Friday November 4 at 7:30 pm the Vijay Iyer Trio will perform in the Chestnut Room of Youngstown State University’s  Kilcawley Center as part of YSU’s Pipino Performing Art Series. Click here for tickets.

I caught up with Iyer by telephone and began by asking him about his latest Trio recording, the first since 2015.

Vijay Iyer: There have been other recordings including a sextet in 2017, along with some duo projects. But we recorded UnEasy in 2019 and then it sat for a little while during the first year of the pandemic. It was released in the spring of 2021.

We’ve been playing it a lot for the past year, bringing it to life along with a lot of newer material. The trio has been a dynamic unit for me. We’ve already recorded a whole new album that will be out in about a year.

Mike Telin: How long have you been playing with Tyshawn and Linda?

VI: I’ve played with Tyshawn for more than twenty years and with Linda for more than ten — but playing as a trio only started to happen in 2019. Linda and Tyshawn are both very busy. They have careers as leaders and composers. Which gives me the opportunity to work with other incredible musicians.

The group I’m bringing to Youngstown will be Matthew Brewer on bass and Jeremy Dutton on drums. They’re both state-of-the-art in what they do — the best in the world. I’ve been lucky to have had access to the best players, particularly those who I’ve now worked with for years. People who when we get together, we can pick up where we left off.

MT: What can audiences expect to hear in Youngstown?

VI: The program will probably be half from that record [2021] and half newer stuff. It all kind of gets integrated into a stew. I like to segue between pieces and create a spontaneous suite out of it all.

MT: What do you find attractive about the combination of piano, bass, and drums?

VI: There’s something intimate and nimble about it. I think of it as a rhythm section, which is what it’s referred to in the context of an ensemble. That means the pulse and groove are generated and sustained through all these different means. It’s an interlocking unit — we move as one, breathe as one, sort of dance as one.

To be part of or to witness us synchronizing to that degree, and building an arc from the ground up through rhythmic action —  I think that unity among these disparate elements can become very powerful.

And then because we’re all playing with our hands, there’s something very tactile about it. The fact that there’s no wind instrument, for example, nothing sustaining a column of air like you associate with the voice.

So there is an interesting challenge around lyricism — how does one sing with these instruments? I like that challenge. I like that dialogue between rhythmic actions that’s more about dance I would say, and then creating the illusion of singing.

That’s the funny thing about playing the piano — all you’re doing is pushing down buttons, so out of that how do you create a sense of breath? Of a voice? Of course we’ve heard thousands of pianists do that. This extends to the plucked contrabass and the struck drums and cymbals. How do you sing and breathe through those instruments?

So it is an interesting challenge, and I like moving between the dance element and the sung element.

MT: The first time we spoke was in 2016 at the Cleveland Museum of Art, when the International Contemporary Ensemble was premiering Radhe Radhe: Rites of Holi. I’m happy to see that it’s getting performances.

VI: We just did it at Arizona State. And I was just on a Zoom call to Norway, where we’re doing it in mid-November. It’s now been performed a couple dozen times around the world, but it had been dormant for a while. I think the last time we did it was before the pandemic.

The filmmaker, Prashant Bhargava, has passed away — he was quite young — so it’s also a way to pay homage to my friend.

MT: You recently wrote a cello concerto for Inbal Segev.

VI: She sounded wonderful, and we also got a nice studio recording out of it. Again, I have definitely been lucky.

VI: I want to thank Kivie Cahn-Lipman for inviting me to YSU. I first met him through the International Contemporary Ensemble. In fact he performed in the premiere of Radhe Radhe. He also played and recorded Mutations, which we toured with Rhade Rhade. It’s great when writing a piece or playing a gig can continue into an ongoing connection that bears fruit over many years.

Supported by engagingly, yet simple staging by Cara Consilvio, a well-prepared cast of singers told the archetypal story of Cinderella with charm and flair. Framing the production was  a sparse but colorful set and wonderful lighting by Dave Brooks. END_OF_DOCUMENT_TOKEN_TO_BE_REPLACED

END_OF_DOCUMENT_TOKEN_TO_BE_REPLACED

The music isn’t easy to play, either. Over the course of two hours, all of the musicians brought fantastic focus to the unrelenting tricky rhythms and countless layers of parts, all of which require a high level of individual responsibility. Even in the moments of calm, the accompaniment remains perpetually unsettled. Adams — who made a sprightly presence on the podium — combines minimalist, repeating motives in gradual layers, which eventually become so dense they overwhelm the senses. Lisa Wong deserves special mention for her thorough preparation of the Cleveland Orchestra Chorus, as does Jennifer Rozsa for the Children’s Chorus, which made a brief but memorable appearance in the last few minutes. END_OF_DOCUMENT_TOKEN_TO_BE_REPLACED