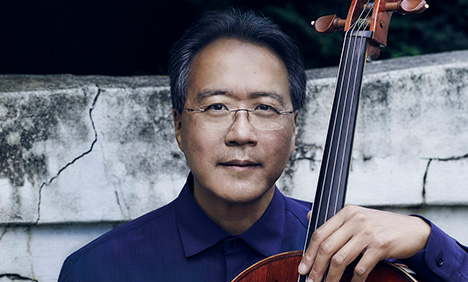 As Yo-Yo Ma stood, wincing and stretching to applause after playing Bach’s Cello Suite No. 3, the wonder of the situation hit home. Well over 10,000 people — maybe twice that number, depending exactly how many picnickers had crowded onto the lawn — had gathered at an outdoor pavilion on a Sunday evening to hear a continuous 140-minute recital. These thousands of paying visitors had driven miles from their homes to hear a single musician play a single set of 300-year-old dance suites on a single instrument, alone onstage with nothing but blue lights as a backdrop. If anyone ever tries to tell you that classical music is dead or dying, then that person is trying to sell you their latest book.

Ma’s solo performance at Blossom Music Center on Sunday, August 12 served as a worshipful tribute both to Bach and to Pablo Casals, the cellist who made the promotion of the six Suites his life’s work. However, Ma’s warm embrace of history only thinly veiled the radical premise of the performance: that this set of compositions, so similar to one another in texture, form, and duration, would work as the stuff of a summer evening’s intermission-free entertainment. Shaking his bow-clasping fist at conventional wisdom, Ma pressed on, and found his audience not just willing to follow along, but thrilled.

The lightness of touch that he brought to the Suite in G major gave the entire piece a feeling of lift, the top notes hanging in midair for gravity-free fractions of seconds. He eschewed many an opportunity to trill, but also moderated his vibrato and took all of the repeats. His allemande had an elasticity of time that suggested a deep appreciation for the work of the historical performance movement. The courante lilted, the sarabande imparted feelings of sun-drenched ease, and the pair of minuets served as mirror-image opposites in mood. The gigue rocked and flowed, and Ma dug into lower arrival points with biting strokes.

For the most part, the sequence of moods within each suite follows a pattern: showy or introspective prelude, tender allemande, vigorous courante, light or dark sarabande, contrasting dance pair, lively gigue. Ma made the exceptions pop. The prelude to Suite No. 2 was not just dark, but desolate, the courante charged by at warp speed, the second minuet felt so light that it could have blown away in a strong breeze, and the gigue — in a brilliant and impressive interpretive move — sped up and became frantic as it approached the end. The entire Suite No. 3, as performed here, could serve as a masterclass in bowing and note lengths, as well as in the proper way to make a sustained pitch feel like pure anticipation in sound.

The prelude to Suite No. 4 presents a challenge: how should one handle this wandering sequence of notes? Ma opted for an aesthetic of labor and effort, separating each note into a unit of its own and making a show — sonically and visually — of producing them. For a grand unified theory of contrasting time scales within a single movement, see Ma’s rendition of the perplexing courante . For a demonstration of the sense of drama and inevitability that can spring from only six notes, consult his take on its sarabande.

The prelude to Suite No. 5 sounded like a solitary improvisation at the onset of the apocalypse. The chords in the courante felt like insurmountable obstacles, and the gigue offered not a victory lap, but a rumination.

The audience would have forgiven Ma for taking it easy in Suite No. 6, but he had more to say. The prelude sounded light, lovely, and beautifully resonant, and the first gavotte had the eloquence and concision of a poem. By the time he reached the gigue, he hardly needed to show off; instead, he played humbly.

In a final set of remarks, he dedicated a brief encore — Casals’s arrangement of the Song of the Birds, a folk tune from his native Catalonia — to his predecessor. Ma speaks Casals’s unifying language of shared humanity and art as healing influence. However, he also knows an anthem of defiance when he hears one. Only weeks ago, the Catalan people pushed toward independence again. Struggles for freedom and dignity occupy people across the globe each day. Ma, brilliant as ever, was not going to let us leave without a reminder of this. As José Maria Valverde famously wrote, no aesthetics without ethics; take this and go. Away we thousands went, glowing.

Jackson began the program with a recitation of Langston Hughes’ poem “Helen Keller” — the first of five poems by Hughes that served as interludes between each piece on the first half. END_OF_DOCUMENT_TOKEN_TO_BE_REPLACED

Pianos with pins and tape on strings, a bass drum and tam tam, crotales, Almglocken, and vibes. Microphones were hooked up all around the instruments. The feed was sent to speakers around the room. Lighting designer Nicholas Houfek hung incandescent globes over the arrangement of instruments from thin black wires stretching across the beams. END_OF_DOCUMENT_TOKEN_TO_BE_REPLACED

From the podium, Elim Chan set an ambitious tone for the evening. The rising star conductor, here in her Cleveland Orchestra debut, has a commanding style, and every twist and turn in Saturday’s performance tracked closely with her baton. END_OF_DOCUMENT_TOKEN_TO_BE_REPLACED